Dimples Romana is set to appear alongside actors Anne Curtis and Vice Ganda in a new movie.

“I’m so thrilled to announce that I will be part of this Unkabogable movie with my dearest loves and mag sis,” said the “Kadenang Ginto” star via Instagram yesterday, July 9. 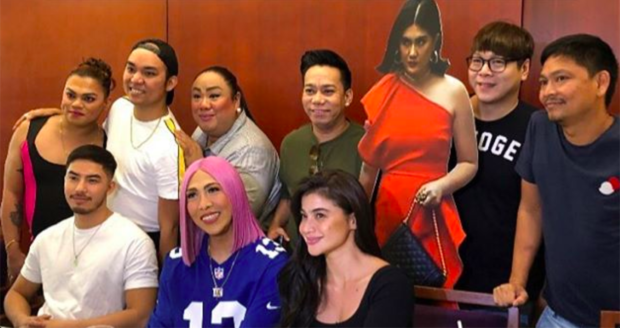 Unfortunately, Romana was unable to attend the film’s story conference yesterday due to scheduling conflicts.

Regardless, her presence was still felt at the event, thanks to a standee of her “Kadenang Ginto” character Daniela Mondragon which served as her proxy. Romana poked fun at the standee, saying her husband is sure to ask her for payment since he had it made.

Viva Artists Agency also posted a photo of Curtis and Vice at the story conference, revealing the other cast members. Tony Labrusca, Chad Kinis, MC & Lassy, Petite and Bren Damage will be appearing in the film as well.

The production, currently with no working title, is helmed by filmmaker Barry Gonzales. During the press conference, Vice said the project will be about arguing siblings, and may be dealing with the theme of trusting one’s family, as reported by ABS-CBN yesterday, July 9.

Filming for the upcoming project has already begun yesterday, as per Vice’s post on Twitter today, July 10.

“Done with our first shooting day for our VICE x ANNE movie with Tony Labrusca and Dimples Romana. Sobrang saya nito. (This is super fun.),” the comedian stated. Ryan Arcadio/JB