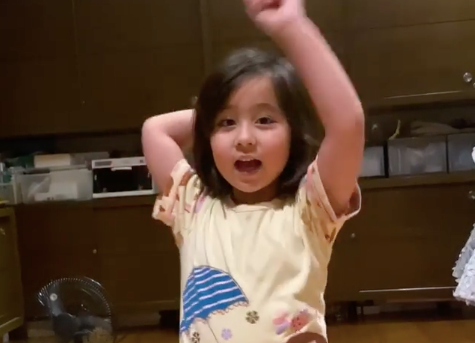 “Congratulations USTe, you did a great job!” the adorable social media darling said. She even blew them a kiss.

Netizens couldn’t help but notice someone appeared to be teaching Scarlet Snow some dance moves behind the video.

“Someone’s coaching behind the cam,” one @kianjibibi said.

Another netizen even speculated that it might be Vicki Belo herself. Belo admitted her coaching role in the comments section: “Buking (busted).”

Doctors Vicki Belo and Hayden Kho both got their degrees in medicine at UST. Vicki Belo also attended UP, which is why she claims she cannot choose sides.

“This Sunday, my schools UST (med school) and UP (undergrad) will battle it out for the UAAP Men’s basketball championship,” she said on her Instagram last Nov. 8. “I’m skipping the game because I don’t want to choose sides.”

The UST Growling Tigers bested the UP Fighting Maroons in a do-or-die match for a spot in the UAAP Season 82 finals. The basketball game ended with the final score of 68 to 65, in favor of UST. Now the team is up against the undefeated champion Ateneo Blue Eagles.

The first game in the finals round is scheduled this Saturday, Nov. 16 at the Araneta Coliseum. NVG

UST eliminates No. 2 UP, roars back into UAAP Finals vs Ateneo