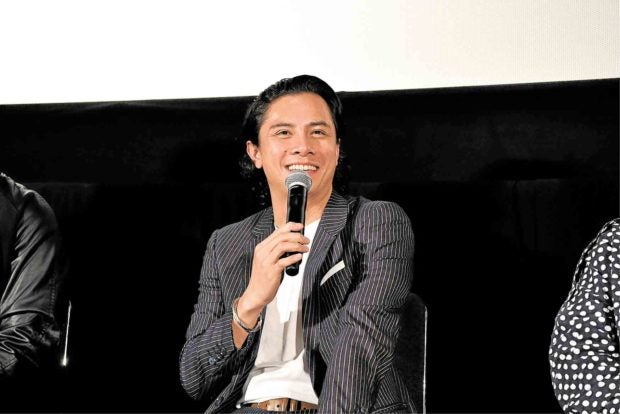 “I wish other actors would experience the same thing,” said JC Santos, who attended his first-ever international film festival in Tokyo last week.

His film, the horror-thriller “Motel Acacia,” with Malaysian director Bradley Liew at the helm, competed in the Asian Future category of the 32nd Tokyo International Film Festival.

“This is a different world for me. I hope other actors will also get to have a feel of how well I got treated in this festival. I also wish we have something like this back home,” JC told the Inquirer shortly after the world premiere of “Motel Acacia” at the Toho Cinemas in Roppongi Hills Club. “This broadens my horizon. I like the idea that we can step out of our comfort zone and expand. Ang sarap ng feeling!”

“I don’t watch horror films because I get scared easily. I just treated this as work. If you’re on the set, most of the time you don’t know what’s happening. The challenge that Bradley gave me was how to sell the idea that I’m really afraid without having to scream or say anything, and with the fear just being seen in my eyes.”

The film, which was partly shot in Slovenia, took four years to make.

The actor added: “I realized, too, that this is also a coming-of-age story for JC. I saw his transition from being a young boy to a man. He was forced to make mature decisions right away. Even his father’s abandonment, he never got to process anymore. He also didn’t have time to mourn. I also realized that even though this is just a simple horror movie, it is able to show JC’s struggles as an illegal immigrant, that this could also be what other illegal immigrants are going through today.”

Set in a fictional snowy state in the United States, the movie is about a young Filipino (JC) who is being groomed by his tyrannical Caucasian father (Jan Bijvoet) to take over the management of the motel, which incidentally is being used by the government in its bid to exterminate immigrants.

Incidentally, the motel is inhabited by a kapre, a Filipino tree demon that eats men and impregnates women.

During the Q&amp;A session, producer Bianca Balbuena-Liew revealed that the production team faced its toughest challenge when the snow, which is an important element in the film, all melted away a day before their shoot in Slovenia.

“I told our Slovenian coproducers to look for a location that has snow right away, so they went to this national park, which normally would not allow any film shooting,” she recalled.

For production designer Benjamin Padero, the set for this film was the biggest he has built so far.

For two months, they locked themselves up in a studio in Makati City, where they created the world of “Motel Acacia.”

“I told the crew that this film is about apathy; how most people choose to ignore the depressing things that are happening right in front of us, regardless of which country we are from,” Bradley said.

Later this month, “Motel Acacia” will be competing for the Netpac Awards at the Taipei Golden Horse Film Festival in Taiwan and will be the closing film at the Jogja-Netpac Asian Film Festival in Indonesia.