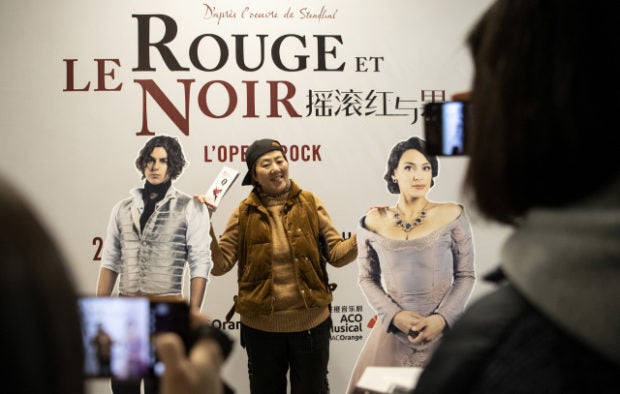 This photo taken on October 25, 2019, shows a fan having her picture taken on life size pictures of actors from the French Musical “Le Rouge et le Noir – L’Opera Rock”, at the Beijing Century Theatre in Beijing. Image: NOEL CELIS / AFP

French musicals that were hits in their country have struck a chord and found a second life far from home — in China, where fans sing along with the foreign cast.

Western musicals have grown in popularity in China in recent years, with fans flocking to classic Broadway shows such as “Cats” and “The Phantom of the Opera”.

But French shows have given American musicals a run for their money, with “Notre-Dame de Paris”, “Mozart, L’Opera Rock” and “The Red and the Black” filling theatres.

French musicals have gained fans in a Communist-ruled country that sees itself as the heir of the Paris Commune, a revolutionary government that briefly ruled the French capital in 1871.

“Notre-Dame”, which is based on Victor Hugo’s classic novel, was one of the first French musicals to break into the Chinese market in 2002.

The show sold out this summer after the iconic Parisian Cathedral’s roof burned down.

Hugo and his social stance have found enduring popularity in China, and the French author was once included on a list of 100 foreign cultural figures President Xi Jinping found inspiring.

“Les Miserables”, Hugo’s revolutionary-themed musical, was rewarded with a 20-minute standing ovation from the audience when it was performed in Shanghai last year, according to state media.

“French shows are generally adaptations of masterpieces or historic events and they reflect the intensity of social struggle,” said Wang Ruiqi, a student enthralled by “The Red and the Black”.

The rock opera — adapted from French author Stendhal’s classic novel about a young man’s ambitions to climb the social ladder from modest beginnings in 19th century France — began its 50-show tour of China in October.

“There’s a real musical culture in China, strangely more than in France,” said Laurent Ban, who plays the bad guy, Monsieur Valenod, in the musical.

Su Dewei, 45, and his wife attended a show in Beijing.

In “The Red and the Black”, he said, “there’s humor and the stage decoration is beautiful.”

China has a rich history of various forms of elaborate operas — though it went through a dark period when Chairman Mao Zedong’s powerful wife, Jiang Qing, cracked down on the arts during the 1966-1976 Cultural Revolution.

But music made a comeback as China opened up to the world following Mao’s death.

More than half of the shows that made their China debut last year were English-language musicals, while 35 percent were French, German and Austrian.

“Cats” was the top seller, taking almost a quarter of the box office, followed by “Chicago”.

Yu Xinyue, who produces “The Red and the Black” in China, said the distinctive French touch is the ability to express emotions through musicals.

At the Beijing show, the mostly young female audience sang along to the musical’s most famous songs — though many likely don’t speak any French.

“It’s funny because (the Chinese audience) was very different 15 years ago,” said Ban, who has performed in French musicals in China for years.

“The audiences were very calm,” he said.

But today they “let themselves go and express their emotions.” NVG