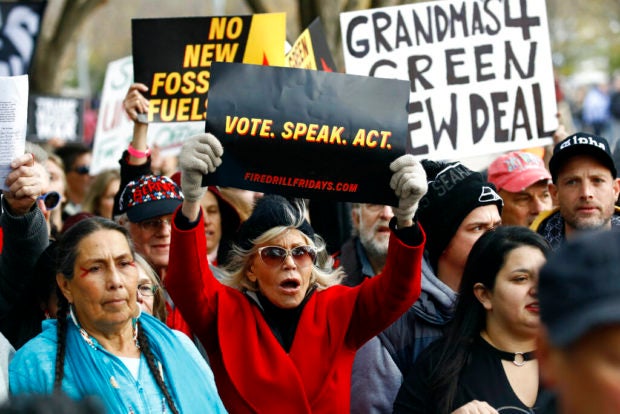 Actress and activist Jane Fonda, center, and others protest against climate policies and call for the impeachment of President Donald Trump outside the White House, Friday, Nov. 8, 2019, in Washington.  AP Photo/Patrick Semansky

Jane Fonda announced in a Nov. 1 climate-change protest that the red coat she has been wearing is her last purchased piece of clothing.

The demonstration was held at the atrium of the Hart Senate Office Building in Washington, D.C. Fonda has joined protests dubbed “Fire Drill Fridays” to reduce the use of fossil fuels.

Addressing a crowd and the media, the actress and activist said in a report from PJ Media, “You see this coat? I needed something red and I went out and found this coat on sale. This is the last article of clothing that I will ever buy.”

She credited teen activist Great Thunberg for her new perspective on consumerism. “I grew up when consumerism didn’t have such a stranglehold over us so when I talk to people about how we don’t really need to keep shopping—we shouldn’t look to shopping for our identity; we just don’t need more stuff then I have to walk the talk so I’m not buying any more clothes.”

Fonda quipped that without shopping, she would have “a lot of free time.”

The “Grace and Frankie” star also spoke to NPR on the same day, listing what she does to care for the environment in her own way. “I drive an electric car. I recycle. I’ve cut way back on red meat. Single-use plastics are gone.”

She also said she chose red as the color of her coat to go with the theme of a fire drill and explained the concept of “Fire Drill Fridays.” “The reason we call it fire drill is because Greta [Thunberg] said we have to act like our house is on fire because it is.”

Fonda has been arrested four times with the red coat and spent a night in jail on Nov. 1.  Niña V. Guno /ra