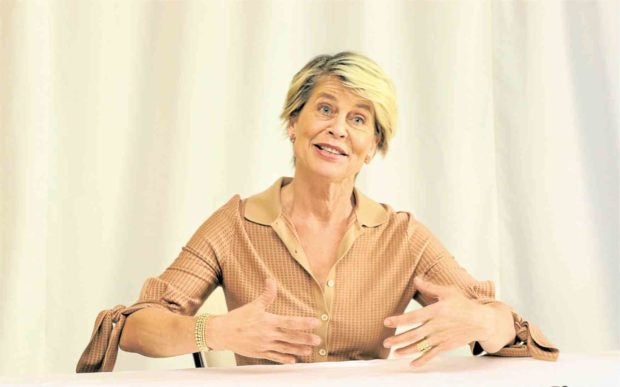 LOS ANGELES—In this part two of our interview with Linda Hamilton, the actress talks about leaving her Hollywood life in 2012 and the roles she would want to tackle after returning to do “Terminator: Dark Fate.”

On becoming a cinematic icon of women empowerment when she returned as a muscled warrior (per her request to James), no longer as a waitress-in-distress, in “Judgment Day,” the Maryland native pointed out, “I don’t set out as a teacher when I’m doing a film. I was actually quite shocked to be put in that iconic place after ‘Judgment Day’ because people were so smitten with the way I looked. I was just, no, no, no, Sarah Connor is a woman in hell. You don’t want to be like Sarah Connor.

“I was approaching it as an actress and the character, not like the ass kicker (laughs). But I’m happy that women have been able to take something away. I’ve met enough of them who say, ‘Wow, I started going to the gym because I wanted your arms.’ If I had anything to do with women finding their voice and strength, I will take it.”

Linda is glad to see Mackenzie and Natalia, who play a human/cyborg hybrid and the future mom of a resistance leader (like Sarah Connor), respectively, having prominent roles in “Dark Fate.”

“There have been those women out there for a long time now,” Linda said. “Look at Wonder Woman and just so much going in that direction. But I am particularly happy because these two women, Natalia and Mackenzie, are so worthy of wherever they are catapulted by this film. They are tremendous, hardworking, brilliant actresses and fine women. So that makes me happy.”

As for her own strength—not just the physical kind—Linda commented, “I am flexible. I will never have rigid beliefs because rigidity is what makes us old, have brittleness in our bones. Rigid thinking makes us unhappy in the world. I am set on never becoming rigidified because not being rigid will keep me young and fluid for the rest of my life.”

The mother of two (a daughter with James and a son with Bruce) laughed at the mention of Arnold’s T-800 now passing himself off as Carl, a regular guy with a drapery business.

“It’s a joke that Arnold plays so well,” Linda cited. “He just went on and on with it and improvised this stuff in the van where he’s talking about the proper drapes and the colors. He embraced it and just made it a joy for the rest of us. I myself thought it was pretty adorable.”

On fleeing her Hollywood life in 2012, after TV gigs, including “Chuck,” Linda said, “I did have a farm first (in Virginia) before New Orleans. But I just have enough of a property for a little courtyard (in New Orleans). I put a pool in because it’s bloody hot there all the time. My life is lovely. I walk my big dog and the little one (Noodle) sometimes, but she’s getting older. I speak to every single person I see because that’s what we do in New Orleans. It’s so lovely to be part of a community like that. 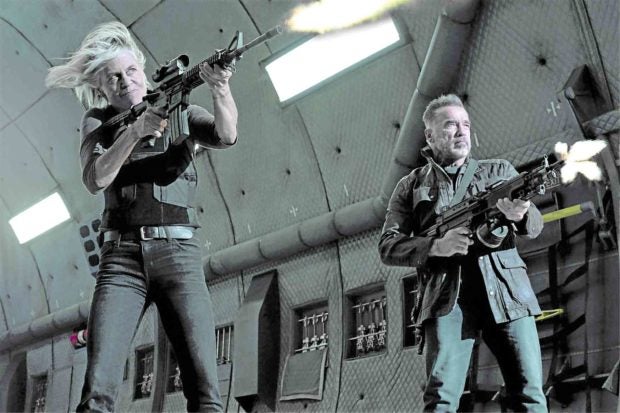 While “Dark Fate” is primarily pop entertainment, it manages to somehow spotlight the US Border Patrol detention facilities that have become controversial because migrants, including children, are kept in cages and in reportedly inhumane conditions.

Linda explained, “There was no bubble on this film. When we shot those ICE detention center scenes in the cages, Tim cried when he made the speech to people because he didn’t want them to feel that we were exploiting something without a true awareness of what we were doing—people in cages.

“Tim is so sensitive like that. It’s very moving to work with Tim just because he does hold that awareness and made sure that we all held the same awareness. So, I don’t think we changed the world by doing it, but we did do it with a sense of awareness and inner horror about the way that those detention centers are run.”

In these troubled Donald Trump times, Linda lamented “the rigid people who all think they’re right about everything. It’s just celebrating the differences and if we could just do that. It’s language. It’s just everybody in this day of opinions. They get to be furious about what something else that was said by someone else. I think we’re going in the wrong direction in this country. But we’ll get it worked out.”

Now that she has done a film again, Linda describes the roles she’d like to tackle. “I like playing all kinds of women. I don’t want to just do action, although I love action. That’s pigeonholing. That’s what happened after the second one (‘Judgment Day’). I just got offered police officers, military women and lesbians because Sarah Connor is so tough.

“I could probably play a countess in the 1920s. But it doesn’t always work that way in Hollywood or the world. But I would love to do comedy.”

“No, which is fine, too, because I like my life,” Linda answered if she has a next project lined up. “And we’ll still be on this road (media tour). We’ve had to do so many special visual effects, voice-over and promo, so this is the end of a three-year run for me. I want to take a vacation. Then, I’m going back to work.”

On whether the future is female, Linda commented, “I think there’s something about the Y chromosome sort of disappearing, isn’t it, in this world, that we’ll be a world of women someday. The women in this (film) world are the life givers and I think there is something to that. Maybe we’re the ones who will sustain this world when all the bad has been done to it. We’ll see.”

Read Next
Celebrity deaths with the strongest impact
EDITORS' PICK
Metro Manila posts lowest temperature yet this ‘amihan’ season at 19°C
Acer starts the year off strong with the Aspire Vero National Geographic Edition
Over 3 Million worth of prizes to be won at Smart Padala’s SENDali Manalo Promo!
Gear up and get ready to play with Yamaha Mio Gear
DOH: 28,471 new COVID-19 cases in PH; active cases now 284,458
On Day 2 of implementation, gov’t says workers now exempt from ‘no vax, no ride’ policy
MOST READ
Lucky plants to grow in 2022
Derek Ramsay on being married to Ellen Adarna: ‘Gumaan ‘yung mundo ko’
Cristalle Belo on raising her kids in Australia: ‘We set limits’
Unvaccinated has rights but also has limits—DOJ
Don't miss out on the latest news and information.