Seymour on ‘Dr. Quinn’ reboot, what she had to do before kissing Arkin 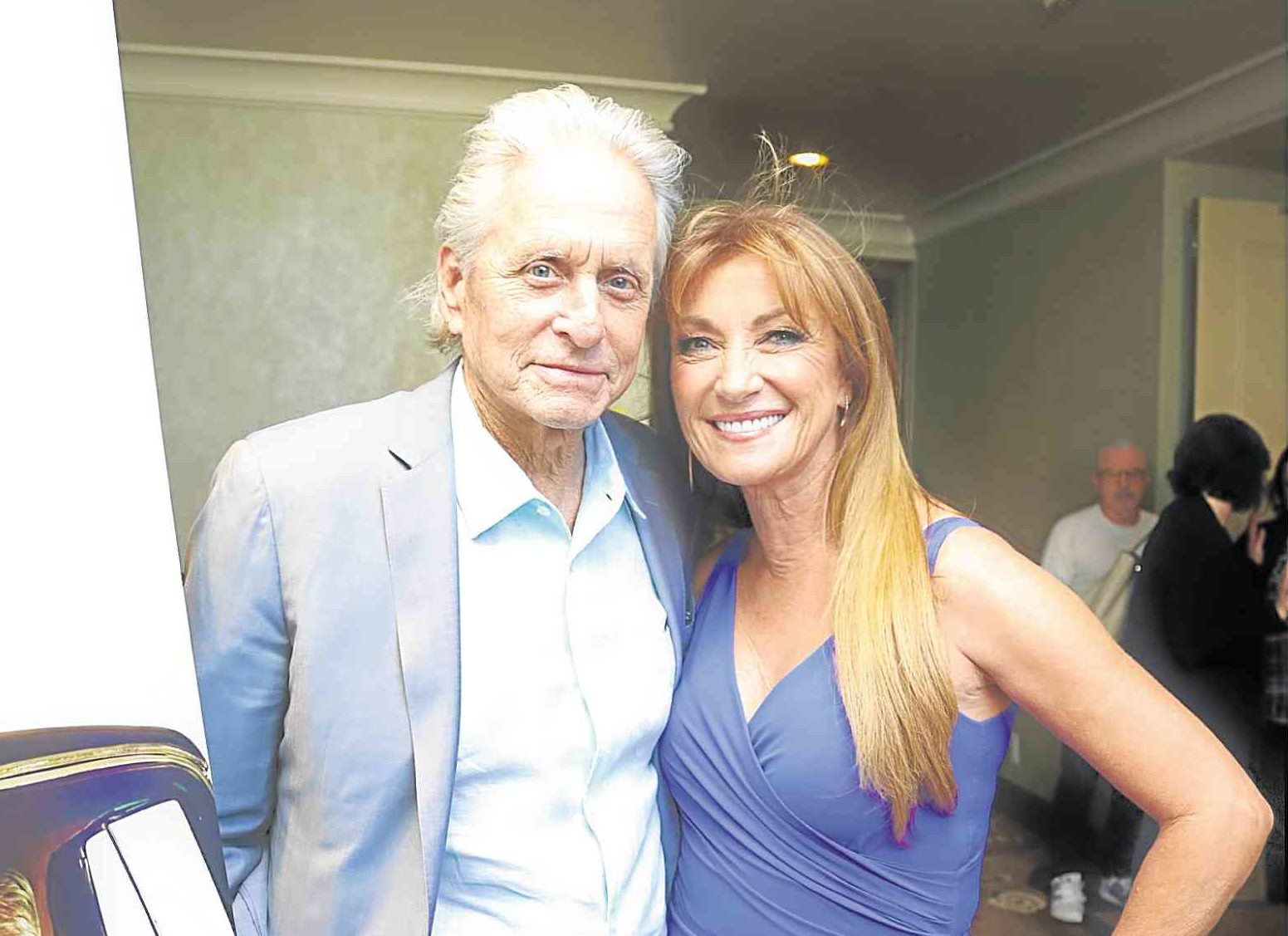 LOS ANGELES—At 68, Jane Seymour is lovely as ever, with an acting career that’s still at full throttle.

“I like this dress because it hides a multitude of sins,” said the actress with a laugh about her blue frock by Chiara Boni La Petite Robe. She was her usual candid and charming self. “I did have a red dress I was going to wear, then I just decided I was too lazy to spend the whole time tucking my tummy in (laughs).”

“I try to take care of myself,” said the British actress who posed for Playboy for a third time last year, becoming, at age  67, the oldest woman to be photographed for the magazine.

Jane, who plays Madelyn in Michael Douglas and Alan Arkin’s Netflix comedy series, “The Kominsky Method,” added, “I don’t do anything drastic, no surgeries or other crazy stuff that people are doing, which is why I can play ‘Kominsky’ one minute and have my brown hair after I go to the hairdresser. Thank you, hairdresser.

“And I work out and try to eat healthily. I’m embracing every moment that I have, but I like to look as good as I can when I can. But I’m not obsessive.”

But many people know Jane for various projects, including “Dr. Quinn, Medicine Woman,” for which she won two Golden Globe best actress-drama series trophies; “Onassis: The Richest Man in the World,” where she played Maria Callas and earned Emmy best actress-limited series honors; and “Somewhere in Time,” the romantic drama opposite the late Christopher Reeve.

In “The Kominsky Method,” the actress portrays Madelyn, a former love of Alan’s Norman character who returns in his life. In real life, Jane, who was married four times, is in a relationship with director David Green, who’s also British.

The actress, who wears gray hair in the acclaimed series written and produced by television legend Chuck Lorre, was not recognized by Michael, her long-time friend the first time she was on the set.

You’ve been on trips to Asia. Can you talk about your fascination with Asia? A long time ago, I was in China. I haven’t been there since Mao Tse Tung (laughs), so clearly, that’s changed. I’ve been to Hong Kong a number of times. It makes me sad what’s happening right now.

But Indonesia is important to me because my mother lived there for many years.

I love Japan. Culturally, it’s an extraordinary place, beautiful. I love all Asian food. I’ve been to Vietnam. I was only there for two days, but I definitely want to go back.

I’ve never been to the Philippines. I know I need to go to the Philippines, I’ve been told, and India. I love traveling and in particular, I love Asia because I grew up with Indonesian food in my house … [like] Sambal and anything spicy and rice dishes. I would go Asian any day (laughs).

Talking about food, do you cook? Yeah, I could rustle up a meal of any kind. I’m a pretty good cook. I grow my own organic vegetables in the back garden. So, we eat fresh produce that’s organically grown. And we have chickens, as well.

How do you feel about your hair being completely grey as Madelyn in “The Kominsky Method”? Chuck Lorre asked to meet with me, and we spent about an hour or so talking. He wasn’t sure whether he wanted me to play Michael Douglas’ or Alan Arkin’s ex-wife. Then he said, “I think you’d be really good, but you’re too young.” I said, “Well, not really (laughs). I just have some nice hair color, but if I wear a grey wig … and I can show you a picture of me from another movie with a grey wig.”

Chuck went, “Wow, you can do that?” And so, I decided that I’d just put the whole character together, and he gave me the opportunity to do that.

But the excitement was when I went on set for the first time.  Michael, whom I’ve known for over 40 years and I had only seen two days earlier, came up to me and said, “Hello, my name’s Michael (laughs).” I went, “You don’t recognize me? Yay, I’ve got Madelyn.”

It was fun to watch the scene where your Madelyn and Alan Arkin’s character, Norman, go horseback riding. You’re on a horse while in Alan’s case, it looked like there was creative editing involved.

Well, Alan is 85, and they have a little thing called insurance. The insurance said, “Alan is not getting on a horse.” So, they had him on one of these fake horse things, and it wasn’t working terribly well.

He did actually get on a horse at some point. But they were not convinced that I could ride a horse. I went, “Really? ‘Dr. Quinn,’ seven years I’m on a horse, in countless movies I’ve ridden sidesaddle, I’ve driven wagons.”

But that was OK. It was a nice way for me to get to see my old stunt girl from 26 years ago. 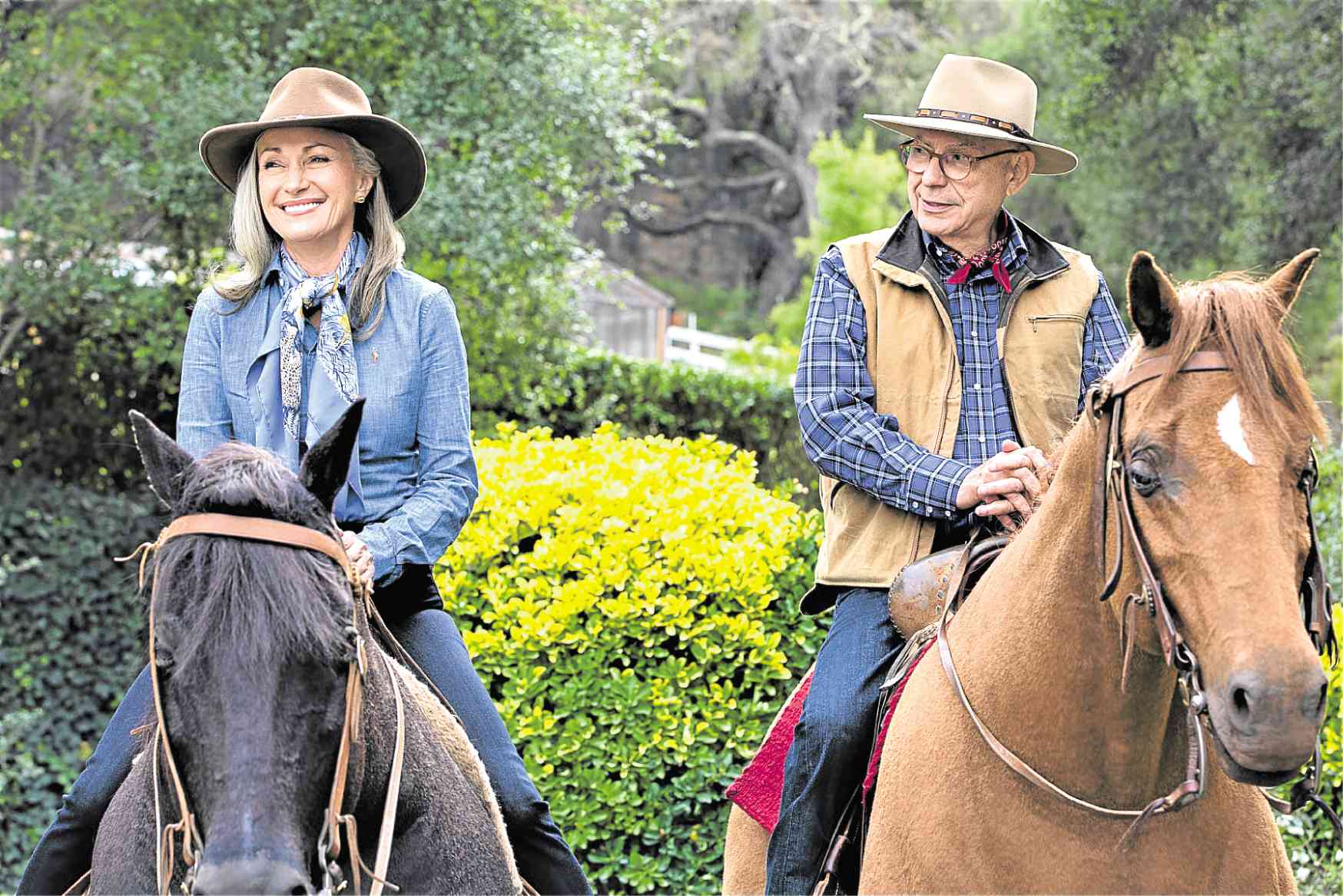 Seymour (left) and Alan Arkin in “The Kominsky Method” —Netflix

What do you talk about when you, Michael and Alan are on the set? I spend most of my time with Alan, and we get along famously. And because of that, Chuck decided to make the role much bigger than it originally was going to be.

And I got to know Alan’s wife (Suzanne Newlander) pretty well. It was so sweet because when Alan found out he had to kiss me, he wanted me to have brunch first with his wife (laughs).

Was it the first time you had to have brunch with the wife of an actor you will have a kissing scene with? Yes. There’s a first for everything.

It’s been almost 50 years since you appeared as Bond girl, Solitaire, opposite Roger Moore in “Live and Let Die.” What are your memories of shooting that? Oh, so many I wouldn’t even know where to start. I was 20 years old when I did that, and Roger was substantially older than me.

But I remember the first time I met him, they did a photo shoot of me. I had to be naked on top, but my hair was longer than it is now, so it came all the way down there, and so it covered the bits that mattered (demonstrates putting her hair over her chest). I’m just thinking, oh gosh, I can’t believe I’m doing this.

Then I had to do a photograph kissing Roger, and Luisa (Mattioli), his wife then, came and said, “No, Roger, you don’t kiss a lady like a bad…” And Roger went from being great to suddenly going stiff.

What else have you been doing lately? I went back to theater. I did “The Vortex” in Singapore just to prove that I could still tread the boards.

You’ve known your boyfriend, David Green, for a long time. How did your friendship bloom into romance? David is a director who wanted me to play Mata Hari in a movie. I said yes, then they never made the movie. Then, we met each other again about five years ago.

We were both dating other people, and we found that we couldn’t stop talking. We’d known each other 38 years earlier. We have the same best friends. That’s how we re-met.

Would you consider getting married again? I don’t see any reason in messing with that at this stage of my life. So no, I can’t imagine doing that. The easiest way to avoid divorce is to not get married, I figured that one out (laughs).

You recently posted a photo with Joe Lando. Does it mean “Dr. Quinn, Medicine Woman” is returning? We’re trying very hard to get the rights. We’ve got a great storyline already scripted out and written by Beth Sullivan, who did the original.

What do you miss about being in your 20s and 30s? I was a little more limber. I could definitely run faster. I probably had much smoother skin.

I’ve had an incredible life. I’ve got such a well of memories and extraordinary experiences. So, I would say the great thing about being my age is I have complete freedom now. I’m not married. I took my life in my hands.

I was raised in a different era and tended to think that men knew better. Not so much (laughs). Not always.

But what I’m doing now is I have time to do the things that I love, so I can paint, design, travel.

Can you talk about your grandchildren? Oh, grandchildren are heavenly, yes. But you don’t get them all the time, and their parents know what they like and don’t like. I have six grandchildren, three that I get to see because they live in LA. They’re fantastic.