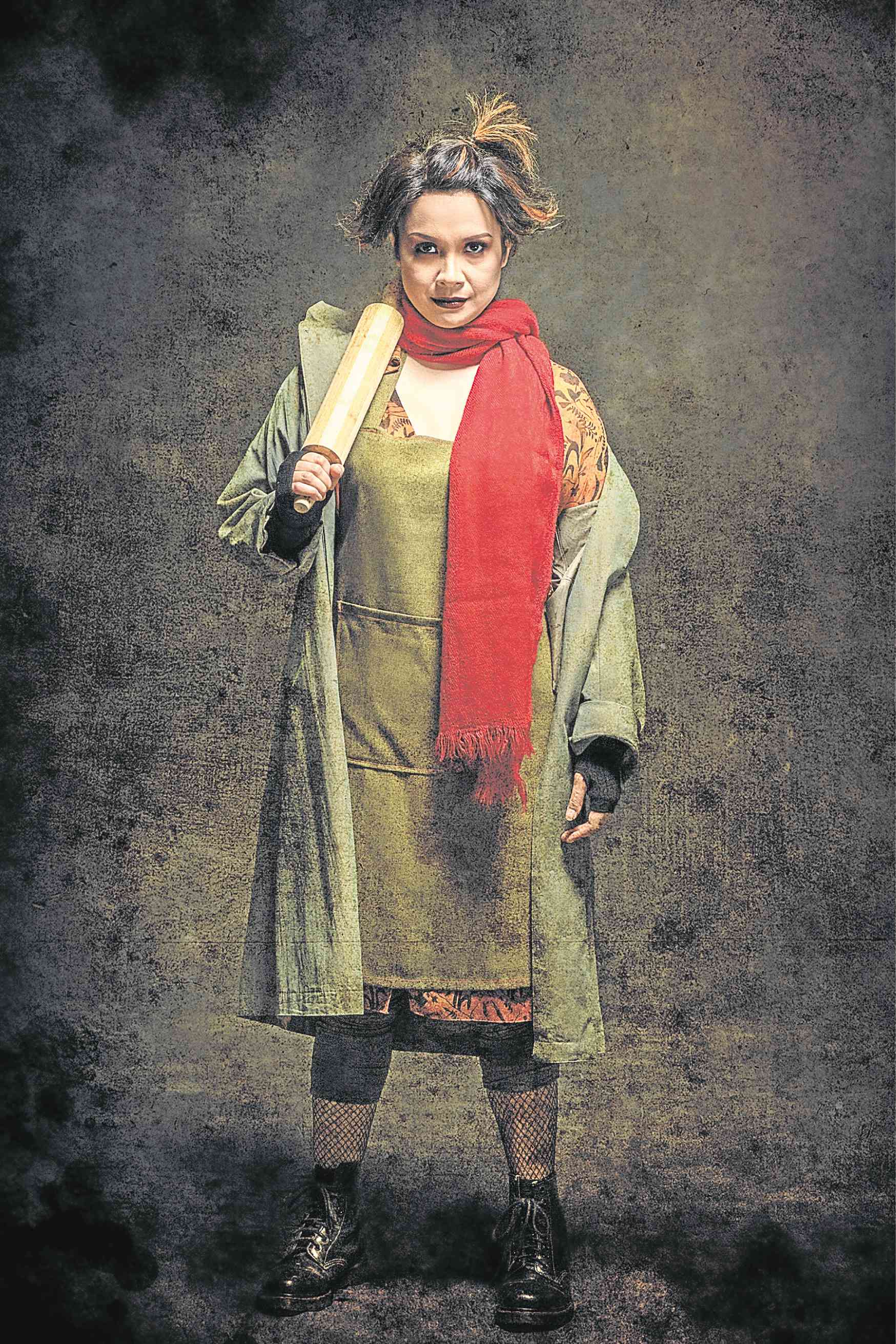 While she’s no stranger to portraying flawed protagonists, Lea Salonga has never essayed a downright “despicable” villain—not until Atlantis Theatrical Entertainment’s staging of the musical “Sweeney Todd: The Demon of Fleet Street,” where she takes on the role of the human meat pie maker, Mrs. Lovett.

“I find it extremely liberating and fun portraying a villain… It would be interesting to step into the shoes of someone who would do such heinous things,” she said at a recent press conference for the ongoing local production of the Broadway show, which is celebrating its 40th anniversary this year.

“I’m finding myself giving a lot of ideas: ‘What if she does this?’ And some of the things I think of are nasty, demented, dirty,” related the Tony-winning singer-actress, who’s headlining the show with Jett Pangan, who plays Sweeney Todd.

After all, everyone has a “dark side”—or at least harbored “dark feelings” at some point in his or her life.

“Say, you break up with a guy. You get sad, depressed. And sometimes, you stay up all night and start thinking of not so wonderful things. And I think everyone possesses that,” she said.

In this version of “Sweeney Todd,” Mrs. Lovett is depicted as the titular, murderous barber’s obsessive lover. That’s on top of being an accomplice to his serial killings. In preparation for the role, Lea said she watched films with similarly wired female characters.

“I saw ‘Fatal Attraction’ and ‘Misery’ and drew inspiration from those,” she said.

Her decision to accept the project wasn’t fueled by a desire to step back from the “wholesome roles” that people usually associate with her. Yes, she’s all nice when she does concerts, or sits as a judge in the singing contest “The Voice PH.” But as an artist, one must be open to playing good and bad characters, she pointed out.

“You can’t always be the nice guy. I’m not always going to be that pretty girl with pretty songs who gets a happy ending with a prince,” she said. “I’m 48 now. I’ll leave those [roles] to the 24-year-olds!”

Asked if she was worried about the possibility that she might alienate some of her supporters because of this musical, Lea said she’s not one to insult her fans’ intelligence.

“I don’t think my fans are stupid. I believe they will be able to separate me as a person from the character I play. I don’t think they would turn their backs on me simply because I played a bad guy,” she pointed out.

But just the same, Lea urged parents to do their research before buying tickets for their young kids. The show has violence and mature content. Her name on a marquee, she stressed, doesn’t automatically mean that the show is child-friendly.

“Even my 13-year-old (Nicole) refuses to see this. She went to our rehearsals one time, and she heard that things were turning emotional and dramatic from the room she was in. There was screaming and all that. She has heard me practice the songs, and I have played the soundtrack in the car.”

Directed by Bobby Garcia and with musical direction by Gerard Salonga, “Sweeney Todd” (music and lyrics by Stephen Sondheim; book by Hugh Wheeler) will run until Oct. 27 at The Theater at Solaire (call 88919999). Also in the cast are Ima Castro, Andrew Fernando, Gerald Santos and Nyoy Volante.

Lea has nothing but praise for her costars, especially Jett, whose voice she described as a “unique instrument” that’s “perfect” for the show’s score. “I have traveled around the world, and I have never heard anyone sing like him. He uses the full range and texture of his voice, so effectively and terrifyingly,” she said.

“I’m about 5 feet away from him in that scene where he transforms into this blood-thirsty man. And in that three minutes or so, I become a Jett Pangan fan while still in character,” she added. “I’m lucky he’s looking at me with those demented eyes.”