The next time a good-looking Filipino-British guy comes up to you as you’re walking in the streets of the metropolis, then asks, “Gusto mong kumanta (Do you want to sing)?,” don’t panic.

Who knows? Seeing yourself in “Street Singing Superstar,” Graham Caygill’s popular singing show on YouTube, could be your rare shot at singing stardom—or your 15 fleeting seconds of fame.

The show, which just wrapped up its nine-episode first season, sees the handsome model-football player approaching 52 random people in nine different locations in Metro Manila—from the concrete jungles of Makati’s central business district to the festive chaos of Tondo’s nooks and crannies.

“There are a lot of shows on YouTube, from survival programs to cooking demos. But I wanted something difficult to make. So, I came up with the idea of a singing show because I knew that a lot of Filipinos like to sing,” Graham told us during our recent quick chat at Rockwell. “This type of program usually needs a studio, a couple of producers and, of course, singers. But I knew that wouldn’t be too hard for me to do because I’m a friendly guy. I always talk to random people. My mom is the same.”

While there are “guests” who aren’t easy on the ear, Graham always knew it wouldn’t be hard to cross paths with “diamonds in the rough,” especially in a country whose national pastime is singing.

For example, the show’s precious finds include a student who sings Alicia Keys’ “No One” in front of UP’s Benton Hall; a pedestrian who belts out the show tune “On My Own” on a busy sidewalk in Ortigas; a passerby in Tondo who impresses with his freestyle rapping; and a gay vendor who knocks his cover of Lady Gaga’s “Million Reasons” out of the ballpark—while he cooks pansit Canton for his famished customers!

In another episode, you see Martin Nievera advising a security guard to use the minus-one of his version of “You are My Song,” not Regine Velasquez’s … for better results.

Good enough to pique your curiosity for the show, right?

Graham wanted to utilize the musical format and merge it with his passion for travel.

“For Season 2, I’m pitching a road trip to the north—to Angeles, Baguio, La Union, Laoag, Vigan—so we can show viewers not just how friendly, vibrant and happy Filipinos are, but also how different each place is,” the 28-year-old athlete-model explained. “That’s my background in England. Guiding tours was part of what I did. When I was 18, I took a trip with five of my friends to the United States, where we traveled from New York to LA on a budget.”

Graham has a British father and Filipino mother. “Every half-Filipino has a random story about how he or she ended up here in the Philippines,” he noted. “My mom is from Nasipit, Agusan del Norte, in Mindanao. She met my dad under sad circumstances while working on a cruise ship.

“He was a passenger who brought his mother with him on the trip as a gift. But while onboard, my grandmother slipped, hit her head and passed away.

“My mom saw my dad very upset at the reception, and felt bad for him. She then gave him flowers with a note. Thereafter, they kept in touch and got together after two years. To this day, they’re still together in England. But my mom also spends a lot of time here because I’m here.

“I moved to Manila five years ago to play football for the Meralco Sparks—that’s how I ended up here (laughs). I played football for two years. After that, I did some modeling (for Bench) and appeared in some commercials.” 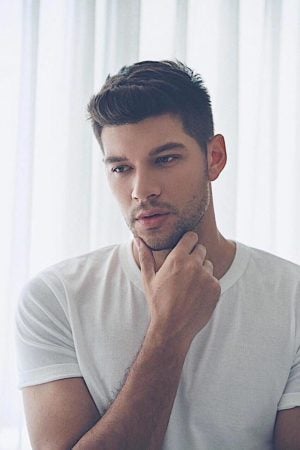 Graham is very different from his sexy image online, we noted. “Oh, that (laughs),” he quipped. “That is precisely why I think I’m misunderstood. I’m far from the image they see on Instagram. I love to travel and meet people from all walks of life. As a person, I’m chill.”

Graham most certainly is. In fact, for this interview, he took an Angkas ride from his place in BGC to the interview venue at Rockwell.

“When people ask me what it is that I like about living in the Philippines, it isn’t just the great food and warm weather. It’s [the people]. While it used to be a source of annoyance, I don’t care so much about the traffic anymore. Because of Angkas, I no longer have an excuse not to go to places. I don’t care if my hair looks crazy; I’m happy wearing a hat. And I don’t care if I’m sweating, since I don’t sweat a lot, anyway.”

When asked what his immediate plans are for “Street Singing Superstar,” Graham shared that he wanted to turn it into an online iteration of shows like “The Voice,” “American Idol” or “X Factor,” but with “less manufactured” portions.

“I look up to these shows, but they’ve been following the same format for 10 to 15 years now,” he explained. “I want to continue doing the show and prove that the concept works. I want it to get better each season—we learn as we go.

“After Season 1, we intend to go on a road trip up north. I’d like to take the show to the rest of the Philippines in Season 3. Then, for Season 4, I’d love to go to the different Filipino communities around the world, mixing travel and searching for Pinoy talent as we show off the beauty of the country and its people. Perhaps we can collaborate with the Department of Tourism and other organizations to execute this.

“The show is different from others you see on TV and online. Here, everything is raw and random. You know how it is on Instagram, where everything you see is ‘curated or controlled.’ In reality, those teeth aren’t as white, the faces aren’t as smooth, and those muscles aren’t as big and impressive.

“There’s going to be a point when people will see through all the fake images of these idols and influencers. Whereas the content I’m posting are literally raw. I’m not hiding or editing anything—what you see is what you get!”

“I’m terrible at it!” Graham said with a laugh. “That’s the thing about being in the Philippines. There’s always going to be that one person who gets people to do the singing—and I think that’s what I’m good at.”

Asked what adjustments he had to make when he decided to live here, Graham said that they weren’t significant.
“I am an emotional man,” he disclosed. “I’m a mama’s boy. I was with her the whole time I was growing up. So, I feel like that’s what makes me Filipino. I may not look Pinoy, but I feel Pinoy!”