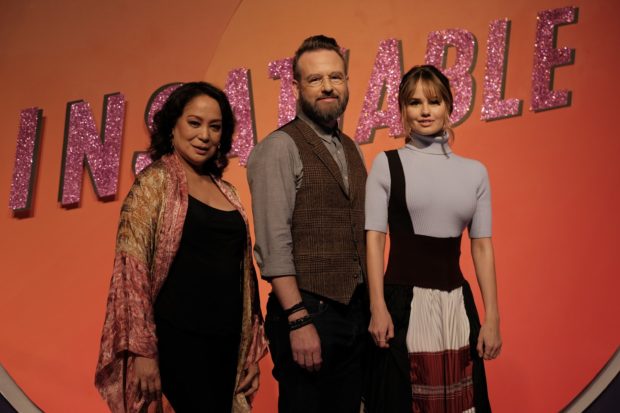 Queens take control! And so they did with much gusto at the Shangri-La at The Fort during the recent fan meet for Netflix’s “Insatiable.” The event was in line with the launch of the series’ must-see Season 2, which starts streaming today.

There was absolutely nothing regular about the event as it was more of an experience that celebrated and appreciated beauty, confidence, individuality and diversity—stirring themes that underscore the series through its “Insatiable” characters, led by Debby Ryan and Dallas Roberts.

Debby plays Patty Bladell, a teenager who was constantly bullied for being obese, while Dallas plays a disgraced lawyer who has an unfathomable obsession as a beauty pageant coach. In a wicked turn of events, Debby loses the extra heft and carries with her an insatiable thirst for revenge.

The two stars were joined by 1969 Miss Universe Gloria Diaz, who makes a special guest appearance in the show’s sophomore offering.

Hosted by Nicole Cordoves, the party started as fans were treated to a Divas opening number, with a lineup of hits that included “Bang Bang,” “This Is Me,” “Applause,” “Born This Way” and “Lady Marmalade,” performed by voluptuous drag queens garbed in colorful, skin-tight, concert-worthy costumes.

These divas weren’t just terpsichoric; they were also acrobatic as their jaw-dropping cartwheels and splits—performed in 5-inch platforms—wowed the crowd.

A fashion show followed the performance, but what the audience didn’t expect was that they would be the ones slaying the runway.

The queens picked out 12 contestants from the audience—with their outfits spanning from denim shorts, sneakers and colorful stripped shirts, to a full-length pink dress, and an all-white fashion-forward ensemble. Contestants gamely showed off their OOTDs as they walked in pairs.

The judges were Debby, Dallas and Gloria, who likewise walked the runway.

With her hair down this time, Debby was dressed in a chic, all-black satin couture dress, coupled with bejeweled strappy stilettos, while the former Miss U opted for a more casual look—an off-shoulder top with clay-colored ethnic prints, paired with black trousers and a classic slingback with gold accent.

It won’t be a pageant without a Q&A, and the judges came prepared with their questions.

Dallas threw the first question and asked, “If you found a genie bottle, what two wishes would you make?” The contestant’s answer sent the audience and the judges, particularly Debby, in fits of laughter, as she got more than she bargained for as the contestant enumerated her grocery list of wishes.

Another young girl, who was unable to answer Gloria’s question, received kind words of encouragement and appreciative applause from the audience.

Another question from Dallas: “If there were no rules in your life for one day, what would you do?”

The contestant in true beauty queen fashion opened her response with “Thank you very much for that wonderful question! I am insatiable,” which elicited laughter from Dallas.

During the break to tally the scores, the Divas once again went onstage as they performed the “Miss Magic Jesus” number from the series’ first season.

In matching yellow dresses, they also performed “Dead Girl,” another song number from the show. Debby recorded the entire performance on her phone while singing along. She likewise gamely took selfies with them.

During the crowning of the winners for Mr. and Ms Insatiable 2019, a “caboodle cake” was brought out as gold-glittered confetti rained onstage.