On the set with Lily Collins in Paris 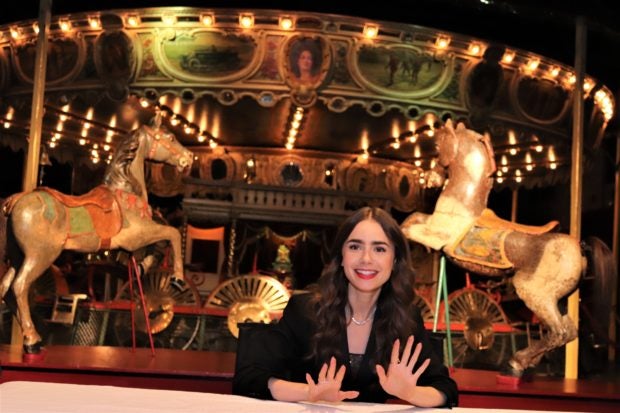 Lily Collins on the France set of “Emily in Paris” —PHOTOS BY RUBEN V. NEPALES

LOS ANGELES—Inside Paris’ Musée des Arts Forains, a museum of vintage funfair objects dating as far back as the 1850s, from carousels to fair stalls, Lily Collins was getting ready to shoot a scene.

Lily has been in the City of Light for several weeks now, as she films her new TV series, “Emily in Paris.” With the half-hour “dramedy” created, written and executive produced by Darren Star, the man behind such shows as “Sex and the City,” “Younger,” “Beverly Hills 90210” and “Melrose Place,” the actress is poised to join his list of iconic female television characters.

The “Sex and the City” pedigree is heightened with Darren’s hiring of legendary Patricia Field as costume consultant (Marylin Fitoussi serves as the costume designer).

The daughter of British pop star Phil Collins and American socialite Jill Tavelman plays the titular role, described as “a young woman from the Midwest who is hired by a venerable marketing firm in Paris to provide an American point of view. Cultures clash as Emily adjusts to the challenges of life in a foreign city, while juggling her career, new friendships and love life.”

“I’ve never been here,” the British-American actress said about the beautiful museum setting. Woody Allen shot a scene here for his “Midnight in Paris.” The venue is a favorite of fashion houses, including Louis Vuitton, for parties.

“So I walked in and gasped,” said the star of “Mirror, Mirror,” “Okja” and the recent miniseries adaptation of “Les Misérables.” “It’s so magical and it’s perfect for our scene today.

“But, yeah, it’s just another element of Lily and Emily mixing together because I’ve been just as in awe with all the locations and sets and this museum as Emily would be.”

Lily described the scene, a product launch of a Cartier-like watch, which we would later watch her shoot with many formally dressed extras. “It’s Episode 6 today. We’re here because it’s a party for a jewelry company. Emily helped put on the party because of her PR firm. So it’s a big PR party.”

According to Lily, they have shot in other picturesque locations around Paris. “I’ve been spending time in pretty much every arrondissement because of filming. We’ve been closing down bridges—Pont des Arts Bridge and Pont Neuf Bridge—the locations have been insane.”

The 2017 Golden Globe best actress-comedy or musical nominee for “Rules Don’t Apply” described living in the French capital while “Emily in Paris” is in production.

“Everything that Emily goes through, lost in translation with her experience here and finding herself, I feel I’ve done as Lily,” she said. “And the concept of this young girl moving here, it’s an unplanned experience for her, but it turns into this whole life experience where she grows physically, emotionally and spiritually as a person.” 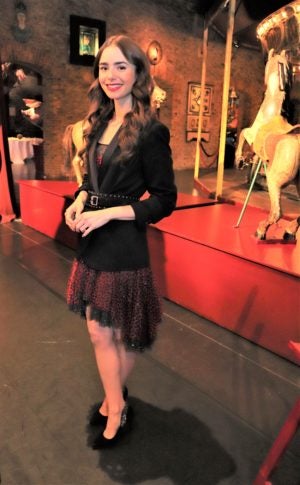 As for her fluency in what is often considered the most romantic language in the world, the woman who was born in England but was raised in Los Angeles said, “I used to speak French in school and I started dreaming in it when I was younger. My little brothers were Swiss, so I was speaking French a lot.”

Lily, noted for her fashion sense, gushed about being able to collaborate with Patricia Field.

“As a young girl growing up and watching all of Darren’s shows, Patricia is like a god to me,” said the actress in this interview during the height of Paris Fashion Week last month.

She wore a red dress with black beads and a black-belted jacket, which was also her costume for the party scene.

“And Emily is a ray of sunshine. She experiences things through her clothes and the color she provides in people’s lives. That shows up in color in her clothes.

“In my first fitting with her (Patricia), I was so nervous walking into it because when you meet someone that you’ve admired for so long, you really hope that you will get along, that you collaborate and that she’s everything you hoped her to be. She’s so much more. She’s like a fairy godmother of fashion to me.

“So for Emily, she’s so different from the people she works with. That’s what’s so great about what she wears because that’s a physical representation of her personality.

“And even at our studios, they were building the stage for a fashion show, so I feel like in some way, I got to be behind the scenes of it. But, yeah, every day has been like Fashion Week for me, so I’m fine missing out this year.”

On the series’ American-in-Paris theme, Lily stressed, “Our show is so different because I feel like we get into the nitty-gritty details of things that many Parisians would know are differences between the two countries.

“I know that Darren and the writers spent so much time researching and speaking to Parisians and asking what things they find are more clash-y than others.

“But yeah, I feel like the show does a good job of presenting what we expect to see in a culture clash.”

On dating writer and director Charlie McDowell, who is British-American (his parents are English actor Malcolm McDowell and American actress Mary Steenburgen) like her, and how they make the long-distance relationship work, Lily beamed as she answered, “I’m very happy right now. When something is incredibly special in your life, you make it work, no matter what.

“And if that involves traveling to be together, it doesn’t matter where in the world—
there are ways to always feel connected to certain people. And traveling is a huge thing in my life.”

Charlie, who dated Emilia Clarke and Rooney Mara, has been seen in Paris with Lily, who was linked to Zac Efron and Jamie Campbell Bower.

As for having Phil Collins for a dad, Lily shared her experience as an adult appreciating the popular singer in a concert. “When I went to his show in Los Angeles, that was the first show I’d seen him in a very long time because he had not been onstage [for a long time].

“So I was watching as a fan, and I ran down to the very front, where he could see me. As he was singing his last song, he waved and sang it straight to me. It was the coolest moment. I felt like we were the only ones there.”

On turning 30 this year, so far highlighted by this promising series in which she is also a coproducer for the first time, Lily replied, “I wasn’t scared about turning 30 … because I feel like I went through a lot emotionally in my 20s. That prepared me for my 30s.

“I think the TV show in itself, being the place where I’m both starring in and a producer, I feel so lucky with the team on this show because all the producers are so wonderful and have made me feel so invited to collaborate with them.

“I love Emily so much. Every day, I just want to make sure that I’m doing justice to the character and obviously to Darren. They’re big shoes to fill, if you think about his female characters that have become iconic throughout time, and the anticipation of this show. I feel immensely proud and very happy.”

TAGS: Emily in Paris, Lily Collins, Only In Hollywood