From the memories of a granddaughter
By: Celine Fabie
Philippine Daily Inquirer / 12:20 AM October 11, 2019 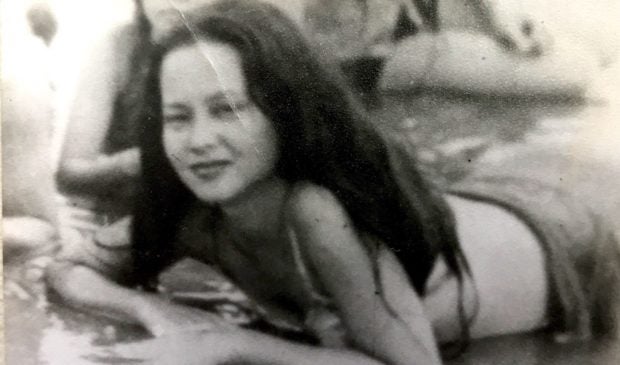 (Second of a series)

For us, her family, we lost the woman we had known all our lives three years ago. It started when my mom found her face down and unconscious on the floor one morning. My Lola Gloria (aka Mona Lisa), stubborn and independent as she was, always refused to live with anybody taking care of her and, in her more recent and weaker years, my mom could only make sure that she was visited daily as we all lived in the same subdivision.

But that day that she had fallen—and it was not her first fall—she damaged her brain. She had also already suffered a mild stroke a few years back. Her MRI scan this time showed a blood clot but, as she was already in her 90s, the family and the neurologist decided that surgery was no longer an option. She was too old to be put under anesthesia. We accepted the situation for what it was and readied ourselves to let her go in time.

But it was her old age that saved her for three more years. Lola Gloria’s brain was already shrunken due to age, so the blood clot that formed inside her skull didn’t cause as much damage anymore because there was space for it, and it didn’t press on her brain as would normally become the problem.

She was soon battling with Alzheimer’s disease. She was no longer who she used to be in terms of her quiet strength and independence. She needed others now. Suddenly, she needed us. The reality of her worries and weaknesses, the realities that she tried to contain and hide all her life, all came out in the open.

She lost many of her memories and capabilities, but also lost all the barriers she had built around her to keep people at bay. It was like seeing her get lost and come home at the same time.

But the most interesting thing about my grandmother was just how much of a thorough fighter and survivor she was. She had been through war, famine, heartaches, loss, abuse, violence, and had been diagnosed and cleared from a number of life-threatening illnesses and accidents. We have actually had a lot of practice in the possibility of letting her go. But she had the final say on when she was ready.

For the last leg of her final battle, despite all our preparations to accept losing her, she persisted as if to show all of us just how much of a fight she can put up with life. At some point, my mom—who cared for her full-time for three years—and I used to laugh and joke about how she might even get up and start walking and cooking in the kitchen again.

And so it happened that in the end, she surrendered herself slowly to a blur of reality and imagination. But what she never lost, however, was her actor’s instincts. She was an actress until the very end. She would often speak, especially if she wanted our deliberate attention, in a manner as if she were delivering lines from a script: dramatic, clear, precise and perfectly intoned.

We called her Kapitan Kidlat in the family. She was always in a hurry. Family who really knew her would know better than to set aside more than 15 minutes for a day’s visit with her.

We could never stay long at parties if we brought her because within a short time after dinner, she would start elbowing her daughters and mumbling, “We should go. These people have to rest.” It was ridiculous every time, because no one ever looked like they needed to rest in the middle of all the partying. But we would always go, because Kapitan Kidlat said so.

When she was still well but already living alone, my mother had a daily schedule of bringing her dinner. It didn’t take long before my grandmother started beating my mother to it. “I had dinner already,” she would proudly tell my mom. My mom would then come earlier the following day, and the day after, my grandmother would have eaten earlier still. Soon, my mom was bringing dinner in the afternoon. In the end, she would just visit in the mornings.

My grandmother didn’t like bothering people. It was because of this that she never wanted to be taken care of. “I don’t want to be a burden to my children,” she would often say. To which her children would retort how it is certainly a kind of burden to not be allowed to care for their own mother.

For the entire time that my grandmother was bedridden, despite not having all her wits about her, she continued to worry about us taking care of her. She no longer refused our presence and, for the very first time, wanted someone around at all times and would get very afraid to be left alone, but she would always worry about us not getting compensated for our time.

As a result of her worries, we became instant “millionaires” in her last years. She would make up all this money stashed in different places so that she could solve the mystery in her mind of how she could possibly get us all paid.

Having been a breadwinner since she was 15, she had always been under the pretense of being in control when she never once was. Letting go wasn’t a life lesson that had to be learned only from our end. My Lola Gloria had to learn it more than anybody else.

The most trying part about taking care of her was that she wasn’t used to being cared for and loved. Outside the limelight or having her own circle of “avid fans,” without earning money and not being able to do so much for others, she wasn’t used to deserving love without trying too hard and working for it.

A life that gives

My grandmother was the ultimate giver. We used to joke in the family how we maybe had to tie her up to avoid having her give her entire house slowly away. Above her main gate, from inside, on the yellow cement wall, you will see a heart molded and painted red, left by the carpenters who worked there once and wasn’t used to how my Lola Gloria fed them and treated them so well.

“Iniwan daw nila ang puso nila sa akin (they said they left their heart with me),” she told me about them, chuckling, when I noticed the heart on the wall for the first time.

I learned to be generous and kind from my grandmother. She always taught all of us in the family to never step on other people, to stay grounded. She reminded us often that life is a wheel with ups and downs and that we will never stay permanently on top, so it is best to be kind and helpful to others because you will also need another’s kindness and a helping hand eventually.

These values inspired my life.

Until came the time that my grandmother was down and out, and finally, after her entire lifetime of giving, it was her well-deserved turn to receive. And she didn’t know how.

In her last year, this was the final lesson I learned from her: it is also important to learn how to give all that love we have to give to ourselves first.

So much about living is about our individual abilities to create, then share what we have created with others. But for the act of sharing to take place, the receiving must happen as much as the giving.

At my lola’s bedside, I have come to realize how, in a world where we often think that there never is enough love and joy, the shortages most often come from the difficulty of the receiving than in the lack of the giving.

As Lola Gloria never left her bed anymore and I alternated erratically between taking on gigs and living the dream of backpacking around the globe, it became strikingly clear how Lola Gloria and I had something more deeply in common than I ever thought, which is not an uncommon trait in the world.

My grandmother, day in and day out, had a difficult time being in this new foreign environment of being completely cared for. And maybe it wasn’t too far from my thinking that I had to go all over the world in order to feel that I was living a life filled with love, and receiving the best doses of happiness from everywhere else outside of where I already am.