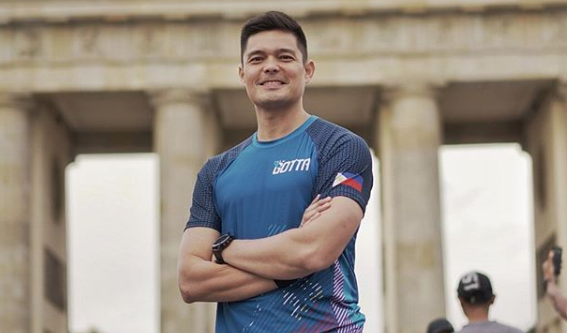 Before the big day, Dantes proudly posed with his race number while at the Berlin Tempelhof Airport via Instagram on Sept. 28.

“Locked and loaded,” said Dantes. “In about 34 hours, another adventure of mine will take off.”

Dantes shared to his fans last Sept. 16 that it was TV host Kim Atienza who introduced him to their running group in 2015. The two were at the lobby of Luneta Hotel in Manila for a climate change event when they got to talk about their families and Atienza’s commitment to lead a sustainable lifestyle.

“In that short span of time, we were able to talk about our families— I was just newly married then and had Zia on the way— and his commitment to a better and more sustainable lifestyle,” said Dantes. “It was also on that same day that he invited me to join their run group, who meet every Tuesdays and Thursdays in Makati.”

The rest, as per Dantes, is history.

“In exactly 13 days from now, I am about to conquer a very difficult task of running for 42 kilometers — something i had never imagined myself doing,” he added.

A day before the race, Dantes shared photos with what appeared to be his running group. Apart from Atienza, TV host and entrepreneur Tim Yap was also spotted.

“Our four-month journey ends tomorrow,” said Dantes. “I may not have crossed the finish line yet but I already feel like a winner because I had trained with these awesome and inspiring fellows.”

Dantes’ months of training was not for naught as he successfully finished the 42-kilometer run on Sunday.

But more than the finisher medal he received after the marathon, it seems he just couldn’t wait to have a swig of ice cold beer with his friends to cap off their journey.

“More than the finish line medal, I was just really looking forward to having this glass of cold beer with my teammates and friends,” said Dantes.