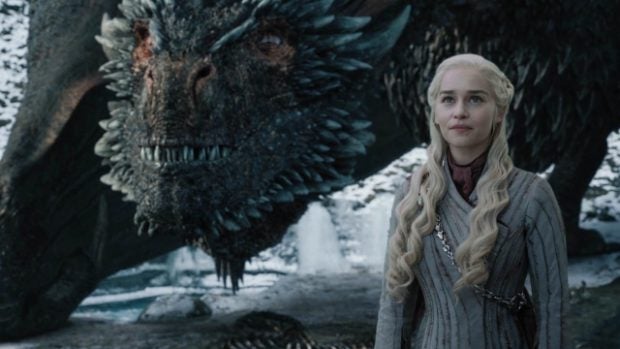 “Game of Thrones” will seek to make Emmy history one final time Sunday when television’s best and brightest gather at a glamorous ceremony in Los Angeles to bid farewell to a number of long-running hit shows.

Despite its misfiring finale which divided fans, the fantasy epic about feuding families and flame-shooting dragons secured a whopping 32 nominations for this year’s Emmys, television’s version of the Oscars.

The most decorated fictional show in Emmys history, “Thrones” has twice won 12 awards in a single season.

It is well on its way to besting that record this year, with 10 awards already bagged in lesser categories at last week’s Creative Arts Emmys, including for the show’s blockbuster special effects and mock-medieval swords-and-bodices costumes.

It is the overwhelming favorite to add the top drama series prize to its haul on Sunday.

“All signs point to ‘Game of Thrones’ picking that up,” predicted Variety’s Michael Schneider.

“Even if fans weren’t necessarily loving that final season … it doesn’t matter—if the voters love it, then that’s what’s going to win the Emmy,” he added.

The Television Academy’s 24,000-plus voters had two weeks in August to pick their favorites.

To get across the line Sunday, “Thrones” has 14 contenders across seven categories.

Serial winner Peter Dinklage is a front-runner for sharp-tongued dwarf Tyrion Lannister, as is Maisie Williams as princess-turned-assassin Arya Stark.

Emilia Clarke (Daenerys Targaryen) and Kit Harington (Jon Snow) are among the others in the running.

“Thrones” was not just a critical hit but a sweeping cultural phenomenon—more than 40 million tuned in to watch each episode of the final season.

Emmys organizers, who have copied the Oscars by eschewing a host this year, will hope that such wild popularity lifts the ceremony’s viewing figures.

All 10 “Thrones” acting nominees will serve as guest presenters—as will the likes of Gwyneth Paltrow, Ben Stiller and the Kardashians.

It is locked in a fierce showdown for the overall comedy gong with “Veep” and “Fleabag”.

Like “Thrones,” U.S. political satire “Veep” is contending its final Emmys after a stellar run, including 17 statuettes.

The show won best comedy in 2015, 2016 and 2017, but took a forced hiatus last year as Julia Louis-Dreyfus battled breast cancer.

She would claim the standalone record for acting Emmys with a ninth win.

Another long-running popular show taking its final Emmys bow is “The Big Bang Theory,” the throwback sitcom about a group of geeky, young California scientists.

It earned only one nomination—for directing—but its creators are unlikely to mind after all 12 seasons were purchased by HBO Max streaming service this week for a reported $500 million.

In the limited series categories, “Chernobyl”, HBO’s drama about the 1986 nuclear disaster, won seven technical Emmys last weekend. It even inflicted a rare defeat on “Thrones” in production design.

But it may struggle to add to that tally on Sunday, when it competes with Netflix’s “When They See Us,” the searing true story of five men wrongly accused of raping a Central Park jogger, which has eight acting nominations.

The Oscar-winning documentary about a hair-raising, free solo climb of El Capitan in California’s Yosemite swept the non-fiction categories. NVG

Read Next
Emmy nominees in key categories
EDITORS' PICK
Notice of 2020 regular meeting of stockholders June 18, 2020
SM prepares for ‘safe malling’
Leveling up your ‘lutong bahay’ with the kitchen companion you never knew you needed
NBI, Immigration to join hunt for ‘underground’ medical clinics
2 Chinese nationals arrested in raid on another unlicensed COVID-19 hospital in Pampanga
P2.2 trillion in losses: Cost of COVID-19 impact on PH economy
MOST READ
NCR is ready for GCQ — Palace
Revillame tells Roque: ABS-CBN is in my heart despite being in rival network
Filipino kids in Ireland orphaned due to COVID-19
Metro Manila mayors told: Keeping bus, jeepney ban ‘catastrophic’
Don't miss out on the latest news and information.