Jean on what sets Alden apart from other heartthrobs 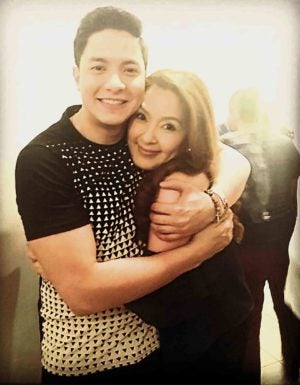 Having worked with Alden Richards since he was a newbie—and then watching him grow to become the star that he is now—Jean Garcia can safely say that he’s one of her favorite young actors.

“He’s a good actor, first off. And he’s a very kind kid,” the seasoned actress told reporters at a recent press conference for the indie action movie, “Watch Me Kill”—an entry in this year’s Pista ng Pelikulang Pilipino, which kicks off on Sept 13.

Jean said they became close after sharing the screen in the soaps “Alakdana” in 2011 and “One True Love” in 2012.

“I remember him bringing home-cooked meals to the set and giving me something to take home,” recalled Jean, who’s set to reunite with Alden in the GMA 7 series “The Gift,” where they will play mother and son. “I’m excited because we will have even more scenes this time around.”

After their last soap together, Alden ended up becoming one of local show biz’s biggest celebrities. The past few months alone have been monumental for Alden, whose latest film, “Hello, Love, Goodbye,” has reportedly earned over P838 million worldwide.

And just last week, Alden was given the Asian Star Prize at the Seoul International Drama Awards in South Korea. He couldn’t be more deserving of such blessings, Jean said.

“He’s good to his family, friends and coworkers. Mas mabait pa siya ngayon. He’s more open and grateful, and that shows in the way he deals with people,” said Jean, who finds it touching that Alden fondly calls her “Madame.” “He said it’s because he respects and loves me. And I’m the first and last person in the biz he would call that.” —ALLAN POLICARPIO

Read Next
Crazy Jhenny, September 3, 2019
EDITORS' PICK
High inflation: Your P1 is now worth only 87 centavos
UK’s Boris Johnson will resign, BBC reports
High-risk pregnancy: Reducing your risk is in your hands
Geek out at TOYCON 2022 powered by Smart Signature
House energy committee chair Arroyo bats for cheap electricity
Unemployment rate up to 6% in May
MOST READ
Suspect in grisly killing of missing woman in Bulacan arrested
Kim Atienza’s daughter flaunts bikini body in response to critics of her ‘revealing photos’
Japanese artist who created ‘Yu-Gi-Oh!’ found dead in the sea
FDA probes popular Filipino noodle brand for ‘high level of ethylene oxide’
Don't miss out on the latest news and information.