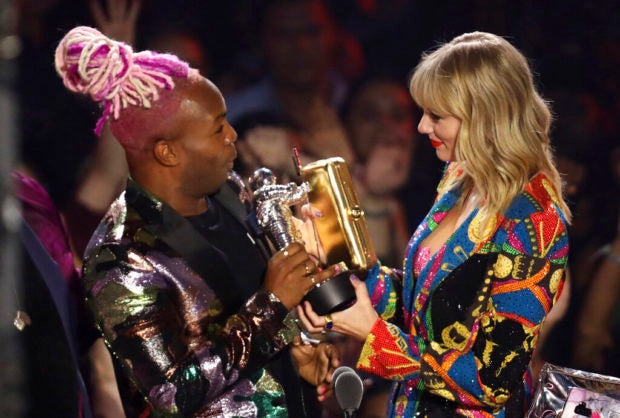 Todrick Hall, left, and Taylor Swift accept the video for good award for “You Need to Calm Down” at the MTV Video Music Awards at the Prudential Center on Monday, Aug. 26, 2019, in Newark, N.J. Image: Matt Sayles/Invision/AP

NEW YORK — Todrick Hall has been preaching about inclusion, self-acceptance and gay pride for much of his career. So it made sense that he would preach about those messages as he accepted an MTV Video Music Award on behalf of Taylor Swift for her anti-hate anthem “You Need to Calm Down.”

The clip, which he co-produced, stars himself and close friend Swift, and a host of other LGBTQ entertainers like Billy Porter, RuPaul and Jesse Tyler Ferguson in a colorful, effervescent but forceful takedown of the haters of the world, including those who spread homophobia.

When the video made its debut, some questioned whether Swift was jumping on the gay-pride bandwagon, but Hall said the superstar is simply evolving, and using her voice. 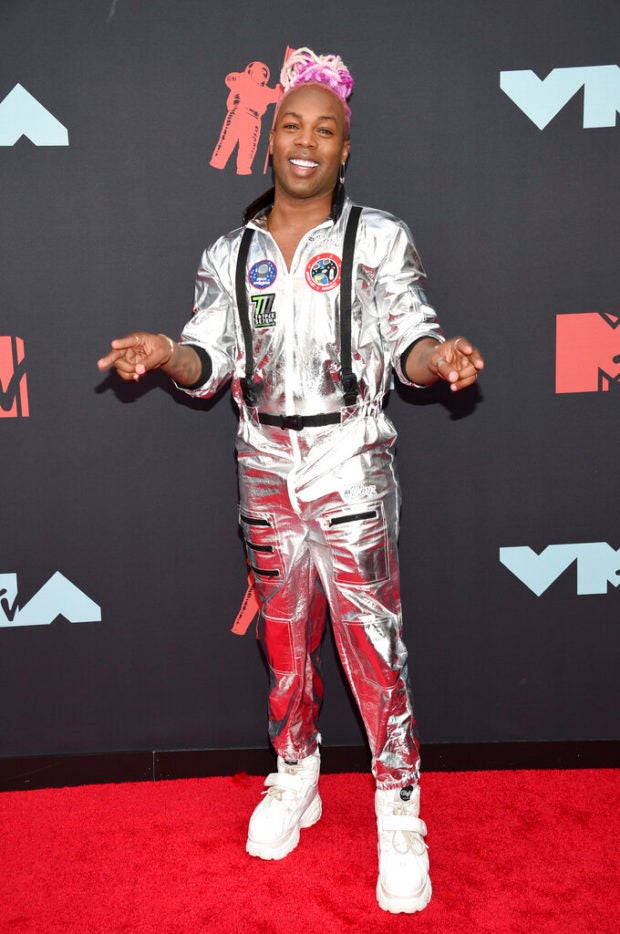 “I’ve been friends with Taylor for the past four or five years and I have seen people drag her because they say that she’s not opinionated enough, that she’s not using her platform to speak out for women’s rights, for the gay community, to tell people to vote a certain way — they don’t feel like she’s used her voice,” he said in a recent interview.

“And then the second she does, people drag her because they feel it’s opportunistic. And I’m just so glad that she right now is in a place where she knows that what she’s doing is right.”

It’s also a place where Hall feels he’s at these days. The entertainer — known for his stint on Broadway in “Kinky Boots” and his dazzling YouTube minimusicals that take inspiration from the likes of “The Wizard of Oz” and “Singin’ in Rain” — released his “Haus Party, Pt. 1” album earlier this summer; “I Like Boys” is a coming-out dance anthem, while “Nails, Hair, Hips, Heels” shows him rocking stilettos with a form that would make Beyonce proud. Ciara is featured on the recently released remix.

For Hall, the album has been another form of self-pride and a way to give others who aren’t as bold a reason to try and do so.

After a brief Broadway stint in “Waitress,” he’ll take the album on the road in a production he promises will be more liberating than his previous tours, where he admits to feeling a bit handcuffed because he was playing characters based on his YouTube videos.

“This is my first album that I’ve ever done where it’s music that just is fun music that I wanted to write, that represents an aspect of me and who I am as a person/artist,” he said. “This tour is called ‘The Haus Party,’ and if it doesn’t feel like a party then I have not done my job well.”

Hall’s party vibe was on full display at the MTV VMAs, where he showed up with Swift sporting purple and pink dreadlocks, and the pair laughed and danced together throughout the show.

Hall counts Swift among his closest friends; she stood by his side while he spoke as “You Need to Calm Down” won “Video for Good” at Monday’s ceremony.

The performer said Swift has helped him as he navigates his growing fame and has become “a good solid friend; that’s something that you want to hold on to for life.”

“It’s been really, really awesome to be someone that she loves and trusts. And for her to tell me her deepest darkest secrets and know that I’m going to keep them safe and for me to be able to do the same with her and know without a shadow of a doubt that she’s not going to repeat them to anyone, it’s just really awesome.”

Hall says RuPaul and Porter have also helped him navigate fame as a black gay man, particularly the Emmy-nominated “Pose” star Porter, whom he describes as his “fairy godmother, fairy godfather.”

“He’s told me about the struggles that he went through to get to this place where he feels comfortable enough to show up to the Oscars in a gown,” said Hall. “It’s been a very huge fight for him and he’s seen it being from a world where that was not a safe thing to do that; that was a life or death decision to wear a ball gown to a red carpet to being now in a place where he can wear it and be celebrated and be all over the news.”

While more gay performers are finding acceptance in Hollywood and beyond, Hall says more work needs to be done. He’d like to see a world where gay performers are the featured performers at a musical show and not the backdrop; where gay characters are introduced regularly in children’s programming; and movies about gay people don’t involve a plotline where “being gay is not the problem.”

“I would love to see two Disney princes fall in love one day like in a cartoon or in an animated feature,” he said.

He added: “I think that I’m a content creator for a reason and that’s what I kind of want to devote my life to doing is like creating content that normalizes these things and makes people who are spending the millions of dollars to make movies be like, ‘Oh it’s OK. The world didn’t end.’ People watch the movie, they loved it actually and everyone’s alive. And we needed to calm down.” NVG

Review: Taylor Swift taps into her joyful side with ‘Lover’