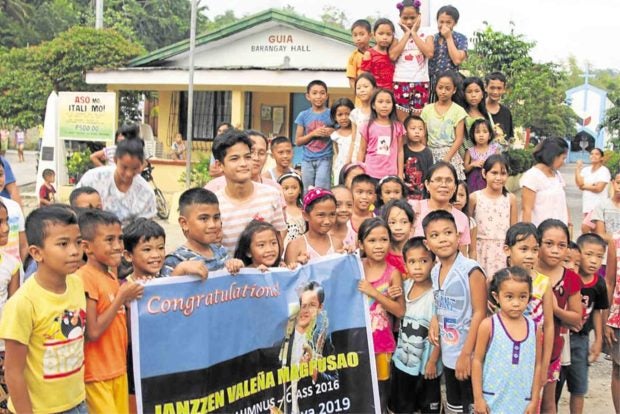 Cinemalaya 2019 best actor Jansen Magpusao on Wednesday returned to his home province in Pandan, Antique. But unlike his character in the critically acclaimed film “John Denver Trending,” who got bullied and beaten up after being accused of stealing a schoolmate’s iPad, Jansen was met with a rousing welcome.

A motorcade, complete with banners, streamers and screaming teenagers, was even organized for Jansen by municipal mayor Plaridel “John” Sanchez IV and his staff.

Jansen’s arrival was treated like a local holiday, with four schools—Pandan Bay Institute Inc. (the location of the shoot), Pandan National Vocational High School, Pandan Central School and Jinalinan Academy (where he is currently enrolled)—opting to cancel their afternoon classes to celebrate his return.

Jansen was joined by “John Denver Trending” writer-director Arden Rod Condez, as well as costar Jofranz Ambubuyog. The motorcade concluded at the Liberman Sports Complex, where more people were present to welcome them, according to art director Ivan Panganiban.

The film, about a farm boy whose life is suddenly upended when a video of him brutally attacking a classmate goes viral, is scheduled to be shown in Pandan in September, added Panganiban.

In a previous interview with the Inquirer, director Arden said Jansen had no plans to audition for the film “because he was too shy. But I got intrigued by his eyes the first time I saw his picture… I saw rawness in him,” Arden recalled.

“John Denver Trending” won the most number of awards, including best picture, at the recently concluded 2019 Cinemalaya Philippine Independent Film Festival awards show. It is still being screened at select branches of Ayala Mall, Vista Mall and Starmall all over Luzon.—MARINEL R. CRUZ