Brian Cox muses on wealth, power, family and the laws of ‘Succession’ 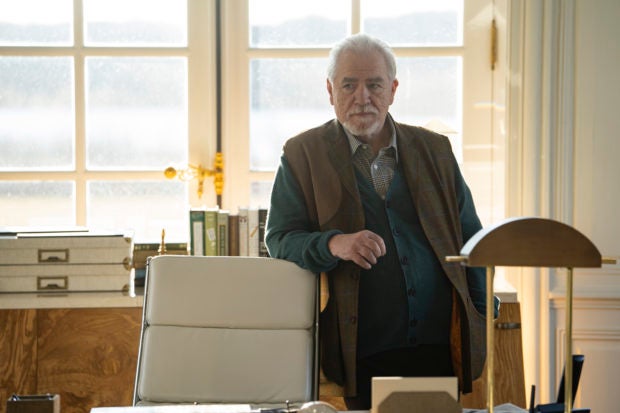 Of all your children, who do you trust the most to hand over the keys to the empire that took you a lifetime to build? This Solomonic dilemma is the underlying theme in HBO’s critically acclaimed series “Succession” (Mondays, 9 a.m.), which returned for its second season this week.

“Succession” follows the lives of the dysfunctional Roy family, led by aging patriarch Logan Roy, who fights to take control of the family-run media conglomerate Waystar Royco, until he finds the worthy successor to his kingdom.

The series plays out like a Shakespearean tragedy, but despite the drama that surrounds it, the show is tagged as a comedy that chronicles the lives of the ultrarich and all-powerful.

Brian Cox (Golden Globe best actor winner for “Nuremberg”) plays Logan Roy, a foul-mouthed and manipulative self-made man who refuses to relinquish control of his company to anyone, not even his own children.

In a recent chat with the Scottish actor, we asked about how he created Logan Roy, as a ruthless businessman and caring father.

“This was a question I asked early on with showrunner Jesse Armstrong because I doubted myself, ‘Does Logan really love his children?’ Jesse replied, ‘Absolutely!’ Logan doesn’t think that his children are right. He thinks that they are spoiled, that they have character flaws, but he does love them essentially—and he does believe in family.

“This is emphasized in Season 2, especially in terms of how much of this is family business … a family affair. He’s very strong as the leader of the family, so Logan is genuinely looking for his rightful successor—the person who is going to take the company to the next generation. At the same time, he is a man who deeply loves his children, especially apparent in the new season, where he rehabilitates his son Kendall after the ‘bear hug’ incident.”

Cox said that what attracted him to the role was the story itself. “It’s a morality tale about wealth and entitlement. We see it all around us with the Kushners, and the Trumps and these children who think they’re entitled to behave in a certain way. In that sense, it’s like a Chaucerian morality tale, which made it really interesting for me.”

On playing Logan Roy, Cox said, “He’s a wonderful character to play. He’s larger than life, a Shakespearean figure. There are so many universal elements to playing him. He is mysterious because you do not exactly know where he comes from, and you don’t quite know what his motive is because he values wealth and finance. For him, this is all a game.”

Can money, power, family and happiness coexist at the same time?

“Others think of it as spiritual process to achieve some kind of balance, but if you are tipped in one direction, that balance is very hard to achieve,” he replied.

For theater fans, Sir Brian is widely regarded as an accomplished Shakespearean actor who spent several seasons in the ‘80s to ‘90s with the Royal Shakespeare Co. and the National Theatre. Thus, the show’s tragi-comic elements aren’t lost on the actor.

On whether the show is meant to be a satire or a social commentary, he said: “It’s very hard to categorize. The show comes from the two writers who wrote ‘The Thick of It,’ which is loosely based on the politics of Tony Blair—and that has a flavor of social comedy and drama. This is what makes the show successful: It is very funny, very savage, and it does tell a compelling tale.”

Speaking to Sir Brian is like attending a Masterclass in Shakespeare. He doles out an insightful analysis between Logan Roy and King Lear. “They’re empire builders, but those empires have turned quite sour. As to their differences, King Lear is giving his empire away, while Logan is trying to keep it alive.”

Does Logan want his children to be like him?

“There is an element of that,” he mused. “But I also think that he would like his kids to be less hooked on something, that’s why he likes his daughter more because she is emotionally in tune with him, unlike his boys who are constantly trying to prove something. He loves his children, but they are a disappointment to him because of their lack of genuineness. Logan understands that, but he doesn’t allow it to oppress them.”

We asked the actor, who has four children of his own, how he defies the laws of, well, succession.

“I want my children to do what they want to do,” he quipped. “You do what does you good. I am so proud of my children because they are adventurers, they have not taken the easy route. They create, they produce, and they do stuff like that. They are their own people, despite me.

“I never tried to influence my children in any way—and I won’t. Actually, that would be bloody impossible because my children are quite headstrong (laughs). I’ve created four very headstrong individuals—and I’m very proud of them.”