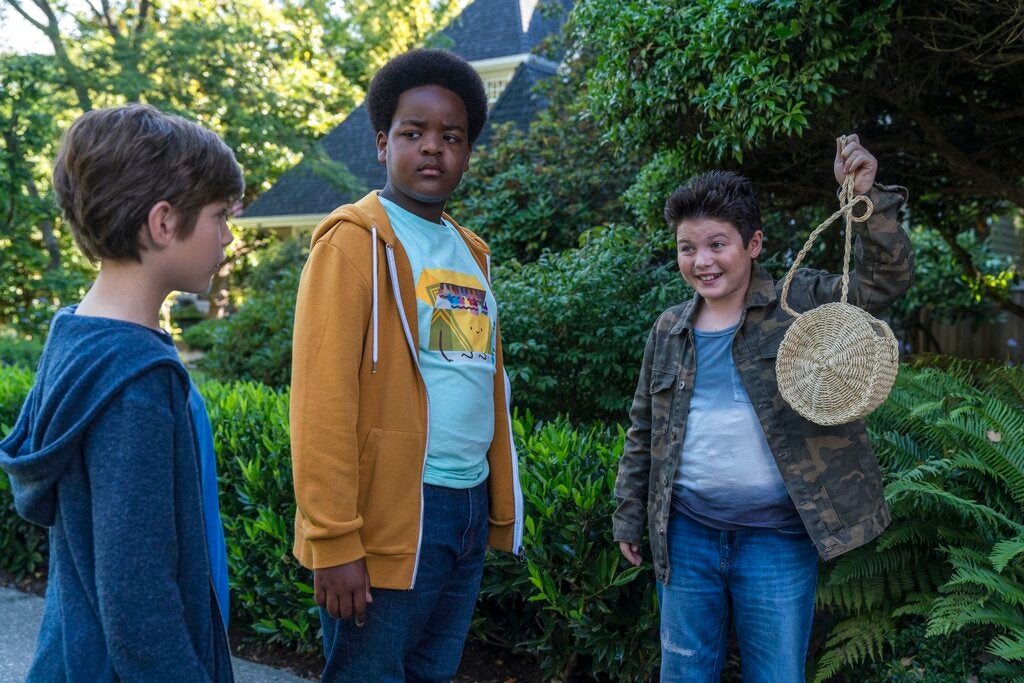 This image released by Universal Pictures shows Jacob Tremblay, from left, as Max, Keith L. Williams as Lucas and Brady Noon as Thor in the film, “Good Boys,” written by Lee Eisenberg and Gene Stupnitsky and directed by Stupnitsky. (Universal Pictures via AP)

The 12-year-old protagonists of “Good Boys” have mastered the use of lingo like “lit” and “burn,” but they are foggier on just exactly what a tampon is and swear that a nymphomaniac is someone who has sex on land and on sea. They are tantalizingly close to young adulthood and yet tragically far away.

“Good Boys” mines that gulf between childhood and adolescence like few films have before. To be fair, few have even tried quite like this. “Good Boys” is rated R which means, as its marketing has playfully highlighted, that its young stars — Jacob Tremblay, Keith L. Williams, Brady Noon — aren’t old enough to see their own movie alone, even though they’re the ones launching F-bombs and unwittingly goofing around with sex toys.

That contradiction is at the heart of “Good Boys,” a teen comedy about tweens. All of the genre’s hallmarks are there, but they’ve been shifted down a grade or two. The party the kids are trying frantically to get to isn’t a kegger but a “kissing party.” Bonds of friendship are tested not by the looming separation of college but the onset of middle school cliques.

And there are slightly different hurdles that stymie their adventures along the way. Whenever the boys encounter the child lock on a medicine bottle, for instance, they’re at a complete loss.

“Good Boys” is a kind of mini-me to “Superbad.” (Seth Rogen and Evan Goldberg, who wrote “Superbad” are producers.) It’s the movie version of a kid wearing clothes many sizes too big. And while it doesn’t touch the comic heights of “Superbad,” ”Good Boys” is a raunchy good time and probably one of the most faithful cinematic representations of pre-pubescent boyhood.

They’re trying their best to project adulthood, unaware how far they are from pulling it off.

The kids’ desperate desire to make it to that kissing party leads them on a neighborhood odyssey kicked off when their investigations into how one kisses goes array. After losing a drone employed to spy on neighboring teenage girls (Midori Frances, Molly Gordon), they find themselves pursued by them. The girls drugs are inadvertently taken by the Beanbag Boys.

Much of the movie’s fun is in how bite-size the hijinks are. In the world of “Good Boys,” three sips of a beer is an unfathomable extreme. A game of Spin the Bottle holds all the drama of the Super Bowl. We know that these mountaintop experiences of growing up will soon enough recede as mere molehills, but that doesn’t make the adventures of the Beanbag Boys seem any smaller to them.

The movie sags in the second and third acts but redeems itself with a sweet, even wistful finale not so unlike the conclusion to “Superbad.” The Beanbag Boys realize they’re passing into a new chapter of life and for a moment they’re nostalgic for the innocent time they’re leaving behind. Coming of age is hard, even for tweens.

“Good Boys,” a Universal Pictures release, is rated R by the Motion Picture Association of America for strong crude sexual content, drug and alcohol material, and language throughout — all involving tweens. Running time: 90 minutes. Three stars out of four.