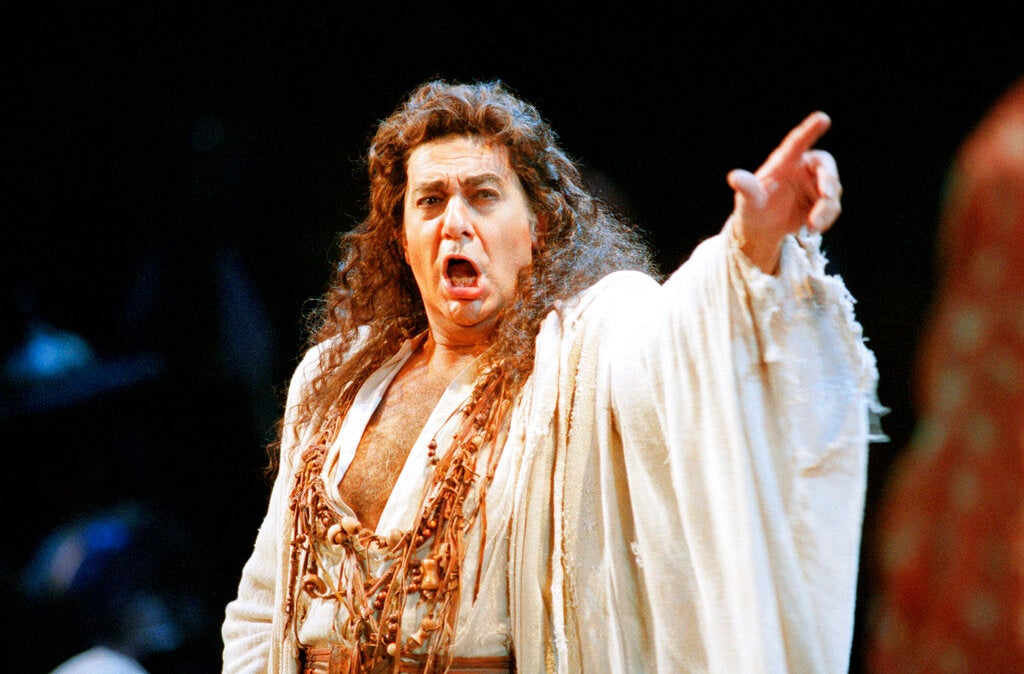 Placido Domingo performs in the San Francisco Opera’s production of “Herodiade” in San Francisco in this November 1994 file photo. On Tuesday, Aug. 13, 2019, the San Francisco Opera said it is canceling an October concert featuring Domingo after the publication of an Associated Press story that quoted numerous women as saying they were sexually harassed or subjected to inappropriate behavior by the superstar. (AP)

The Philadelphia Orchestra and San Francisco Opera immediately announced they would cancel upcoming performances featuring the star and the Los Angeles Opera opened an investigation following an Associated Press story in which numerous women accused the opera legend of sexual harassment and inappropriate behavior spanning decades.

In Europe, there were no immediate cancellations of the 78-year-old Domingo’s performances and even some words of support for the star. Opera world officials noted that no charges had been brought against Domingo and no formal judicial investigations were underway that might provide legal underpinning to cancel any contractual obligations.

Opera houses in the United States might consider the possibility of damaging protests outside their venues if they maintained the scheduled performances. But, in Europe Domingo’s status as one of the most popular and influential figures in the opera world could trigger a backlash against venues if performances were canceled without due process, said one opera official, who spoke on condition of anonymity because of lack of authorization to discuss personnel matters.

“Some attitudes, seen in hindsight, risk being misunderstood,” cultural journalist Leonetta Bentivoglio wrote Wednesday in the Italian newspaper La Repubblica. “That he was a Don Juan was something everyone knew, and in the promiscuous theater world he is not alone. We must add that his charm has always attracted a crowd of women, and often it was he who had to defend himself.”

Bentivoglio recalled an incident at a Paris hotel during Domingo’s “Three Tenors” heyday with Luciano Pavarotti and Jose Carreras, when he asked journalists to pretend to accompany him in the elevator “to escape to his room without being followed by some beautiful young women,” who were in pursuit.

“These are difficult stories to tell in the slippery era of #MeToo,” she wrote.

Nineteen of the singer’s 24 engagements through November 2020 are on European stages, according to his website. Upcoming performances in Salzburg, Milan, London, Zurich, Cologne, Hamburg and Geneva were still on but some venues said they would monitor the investigation in Los Angeles, where Domingo has been general director since 2003 and previously was artistic director. Other venues postponed comment, citing the summer holiday.

Domingo received support from the Salzburg Festival in Austria, his next scheduled performance on Aug. 31, as well as from some singers who have shared the stage with him.

Salzburg Festival president Helga Rabl-Stadler, who said she has known Domingo for 25 years and has long appreciated both his “artistic competence” and “appreciative treatment of all festival employees,” said “it would be factually wrong and morally irresponsible to make irreversible judgments at this point.”

The Hamburg opera house in Germany also said Domingo’s Nov. 27 appearance there was still on, citing the lack of any legal action against the tenor.

“As a public institution we neither tolerate nor trivialize sexual assaults, but we are also bound by the principles of the rule of law in our actions. Valid contracts with the concert promoter exist for the appearance of Plácido Domingo,” the opera house said in a statement. “Subject to further developments, the concert will therefore take place as planned.”

Domingo did not respond to detailed questions from the AP about specific incidents, but issued a statement calling the allegations “deeply troubling, and as presented, inaccurate.”

“I believed that all of my interactions and relationships were always welcomed and consensual. People who know me or who have worked with me know that I am not someone who would intentionally harm, offend, or embarrass anyone,” the statement said. “However, I recognize that the rules and standards by which we are —and should be — measured against today are very different than they were in the past. I am blessed and privileged to have had a more than 50-year career in opera and will hold myself to the highest standards.”

Domingo has a reputation for making the rounds of offices when he arrives at theaters to greet employees and workers at every level — a characteristic that has helped make him beloved in a world full of demanding divas and divos. He also founded the Operalia world opera contest, an event attracting 1,000 applicants each year that has helped launch careers for the last 26 years.

Three Spanish sopranos have come to his defense, saying that they have never experienced the sort of behavior described in the AP story, which included accusations that he put his hand down one woman’s skirt and forced wet kisses on three others. All of the allegations were related to incidents in the United States, spanning two decades beginning in the late 1980s.

Spain’s Europa Press news agency on Wednesday quoted Spanish soprano Davinia Rodriguez as saying she “never felt the least indication of what they accuse the maestro of,” adding that Domingo had always shown her and theater workers “the maximum of respect, with the humbleness and generosity that characterizes him.”

Fellow Spanish soprano Pilar Jurado said that Domingo had always behaved “as a perfect gentleman” with her and Spanish soprano Ainhoa Arteta expressed shock at the allegations, saying she considered Domingo and his wife to be family.

“I have no idea if he might have flirted and scored. That sort of thing went on before and still does now, but I know he is not a harasser, I’d put my hand in the fire on it,” Arteta told the Spanish daily El Pais.