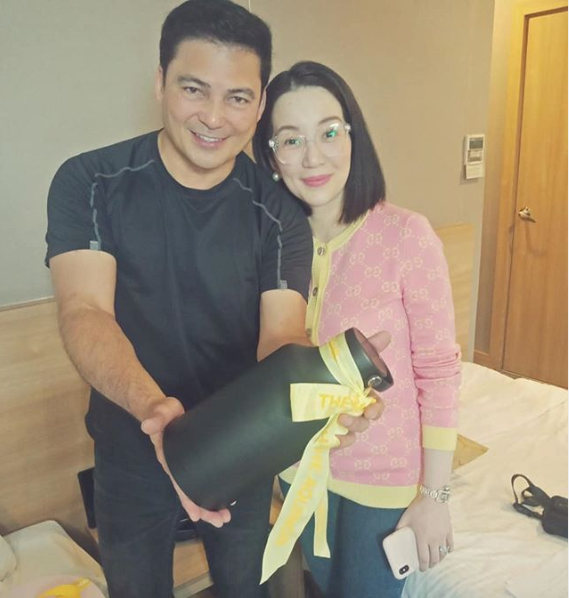 Kris Aquino and Gabby Concepcion caught up on the set of “Kampon” which will premiere at the Metro Manila Film Festival. The two actors play a married couple in the horror movie.

A YouTube video posted on Tuesday, Aug. 13 shows Aquino and Concepcion’s exchange where they spoke candidly about the past, including their personal lives.

Aquino, who is a producer on the film, visited the set even if it was not her scheduled shooting day to thank Concepcion for joining the project. Aquino’s costar was originally Derek Ramsay but he backed out before shooting began this August.

The actress praised Concepcion for his teleserye “Ika-6 na Utos”, sharing that she and her kids were “obsessed” about it. The actor asked why she thought many related to the show.

“Nag-relate ako doon kasi naintindihan ko rin naman na ang mga lalaki ay may kahinaan sa tukso. Parang ikaw,” she said. (I related to it because I understand that men are weak to temptation. Like you.)

She noted though that “it takes two to tango” and that it is up to the person tempted to give in or not.

Concepcion was previously married to Sharon Cuneta in 1984, when Cuneta was 18 and he was 20. The marriage produced one child, KC Concepcion, and ended in 1987.

In November 1993, the court declared that their marriage was null and void because it was “bigamous in nature,” given that Concepcion had been married to another woman prior to Cuneta. The actress also said in legal papers that “other women” were part of the cause of the separation, as per the Philippine Entertainment Portal in February 2018.

Despite their complicated past, fans continue to pine for a ShaGab reunion — including Aquino herself, who avidly followed the tandem during her childhood.

Aquino asked if a movie could ever be made with the two stars together. “Next year is there a chance—“ she began her question, when immediately Concepcion responded, “Gawin na natin (Let’s do it), let’s shoot? When?”

Aquino continued, “Is there a chance for that Sharon-Gabby—”

“I already answered you, when are we going to shoot? You didn’t even ask me that question but I knew it was coming.”

“If I text [Sharon Cuneta] and I say you said that?” Aquino clarified, to which Concepcion said, “Game. Matagal na akong go (I have been game for it for a long time).”

Plans for a ShaGab movie fell through in 2018. Cuneta said in Instagram comments on May 2018 that she had problems with the demands of Concepcion’s camp which is why she backed out from the project. Could Kris Aquino finally be the bridge between them? JB