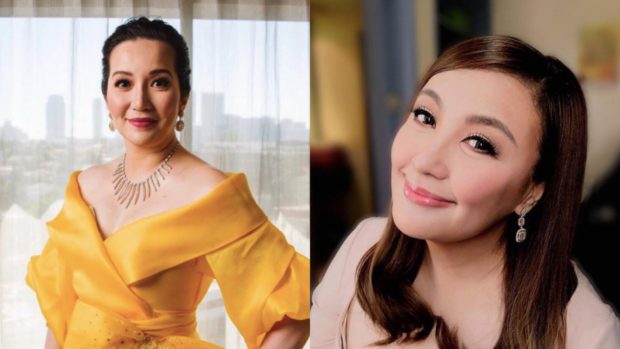 Kris Aquino showed she was indeed a true friend to Sharon Cuneta, never leaving her behind during a difficult time.

The Megastar recalled a time when the Queen of All Media stood up for her, via an Instagram post showing Aquino’s photo on Friday, Nov. 2.

Cuneta remembered a time when she received harsh comments from netizens for a movie project that did not push through. Although she did not specifically name the project, speculations have it that she was referring to the reunion movie with Gabby Concepcion that got scrapped.

READ: Next Sharon-Gabby movie will need ‘God’s timing’ — if it will ever happen at all

Despite having numerous friends in showbiz, Cuneta recalled that Aquino told her these words that touched her heart: “I LOVE YOU AND I WANT TO FIGHT FOR YOU!”

“Now this, Kris, made me cry,” Cuneta said, addressing Aquino. “I kept it to myself because I didn’t know how to react.”

Being “shocked and surprised” upon reading Aquino’s message, Cuneta added she also could not believe how Aquino was willing to put her own name “on the line and defend” her.

“These words, ‘I love you and I want to fight for you’ shall forever be etched in my heart, and in my memory,” she gushed. “Seriously, and sincerely, thank you Beej from the bottom of my heart. I will never forget that sweet and brave gesture.”

Aquino then replied to her post, saying that she prayed with her for that project to push through, and even offered to be the “kontrabida” (antagonist). Nevertheless, Aquino said she is sure that Cuneta’s upcoming movie with Richard Gomez will be a record-breaking success.

And it appears that Aquino may have confirmed that Cuneta’s scrapped movie project was her reunion movie with Concepcion when she commented, “My dad watched ‘Dear Heart’ with me over and over again during our Boston years—and I am a fan of that love team.”

“Dear Heart” was Cuneta’s first feature film — where she was also first paired with Concepcion — released in 1981. 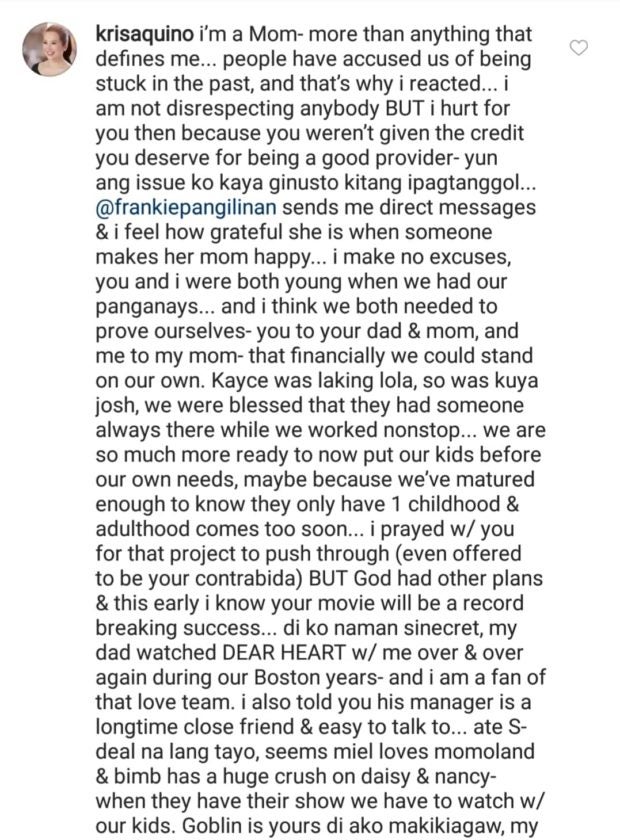 Both Cuneta and Aquino have expressed their love for each other publicly in the past. At one point, the Megastar empathized with Aquino after the latter revealed that she was financially abused — an ordeal which left Aquino fearing to lose her savings for her sons. JB

Sharon Cuneta empathizes with Kris Aquino, furious at person who financially abused her