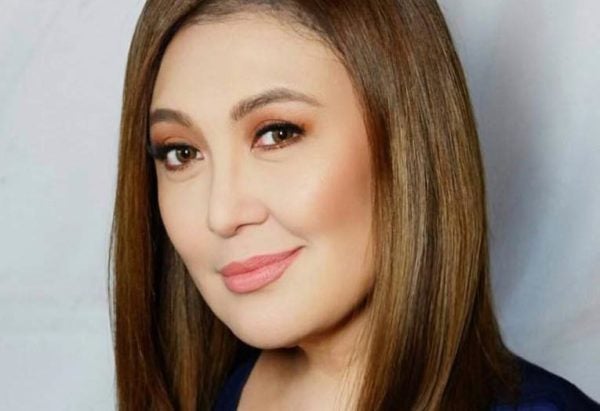 The fans’ clamor for another Sharon-Gabby movie may have been heard by the powers that be, but it looks like another flick with Megastar Sharon Cuneta and Gabby Concepcion is actually far from reality.

Last week, March 20, Cuneta took to Instagram to share to her fans that she had just gotten back from a meeting with Star Cinema, possibly hinting that a project may be in the works. In a follow-up video, she mentioned that the meeting went okay.

“The meeting went okay, but it’s not like locked in,” Cuneta told her “Sharonians” as she filmed herself inside her car while on the way home from the meeting. “Not everything is locked in, lets just pray for that, that it pushes through. Surprise na lang.” 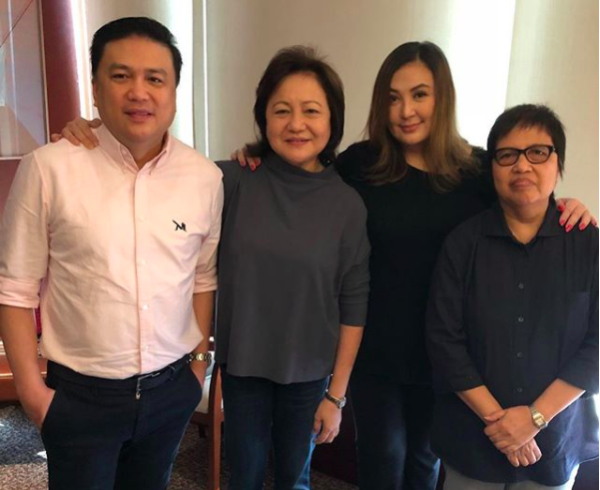 It seems, however, that the Sha-Gab movie most were hoping for won’t be happening anytime soon. It is known that Cuneta, in one of her Instagram comments made recently, sent an apology to her fans. The comments were shared by entertainment site Fashion Pulis yesterday, with Cuneta saying, “Guys I am sorry. Star has done as much as they can. I have done as much as I could. This is hurtful to me as well. If you are upset, how do you think I feel? Star or I did not want to break your hearts. My heart is broken.”

Cuneta added, “And I am so very tired. It may be hard to accept, but there may never be another SHARON-GABBY movie again. Sorry.” 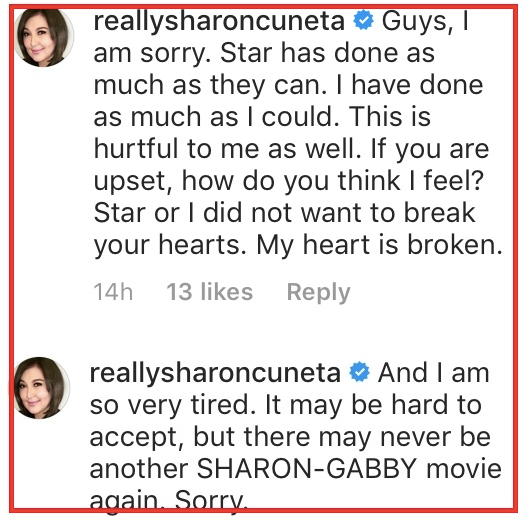 Visibly upset, Cuneta took to posting cryptic quotes about “God’s timing” in her Instagram these past few days. Concepcion, too, seemed to have caught on the news, as he also posted cryptic quotes two days ago about trusting God’s timing. The impossibility of another Sha-Gab movie, it seems, has taken a toll not just on the fans but on Cuneta and Concepcion as well.

Meanhile, Cuneta once again shared a note to her fans last March 24 before she and her family flew out to Thailand to celebrate her 24th anniversary with husband Senator Francis “Kiko” Pangilinan. In the note, Cuneta asked her fans to pray for her.

“Breathe in, breathe out, dry your tears so you don’t look like Kermit the frog. God will give you something to make your fans happy,” wrote Cuneta. “Please pray for me. It will all be good. Thanks for letting me vent. Sorry and thanks so much for understanding that things aren’t always easy for people like me who trust too much.”

A post shared by Coach:TheVoice.phActorSinger (@reallysharoncuneta) on Mar 23, 2018 at 6:16pm PDT

Cuneta’s revelation were taken as a blow by some of her fans who have been following her and Concepcion all these years, the very same loyal fans who, upon seeing their favorite love team reunite in a one-minute commercial, rallied with hope for another shot of them on the big screen. Saddening as it may seem, however, nothing is impossible, particularly for their fans who would never say never. JB

Sharon Cuneta on the hardest part of her weight loss journey: ‘I never felt right’