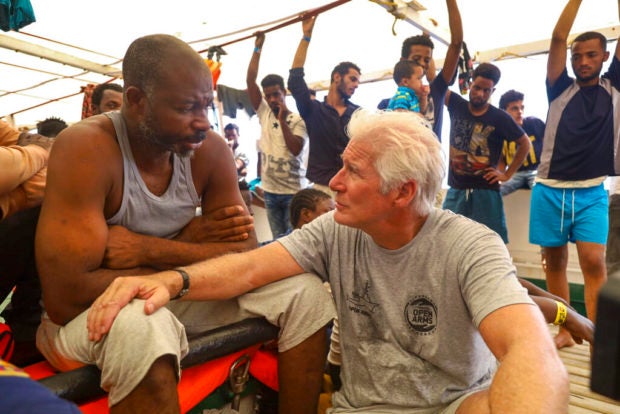 ABOARD THE OPEN ARMS ON THE MEDITERRANEAN SEA — Carrying boxes of fruit, Richard Gere visited rescued migrants Friday on a humanitarian ship that has been struck in the Mediterranean Sea for over a week, landing smack in the middle of a debate over immigration that European nations have not been able to resolve.

The American film star took food and supplies by boat to 121 people aboard the Open Arms, a rescue ship floating in international waters near the Italian island of Lampedusa after being blocked from entering ports in Italy and Malta. Those nations want fellow European Union countries to take in more of the migrants who come across the sea.

The actor, 69, spoke to several migrants who had fled war-torn Libya on unseaworthy smuggling boats before being rescued, among them a man and his baby. A father of two, Gere shared photos of his youngest son, who was born in February.

Gere has a long history of human rights activism and often campaigns for environmental issues and AIDS research. He has been banned from China for advocating for human rights in Tibet. 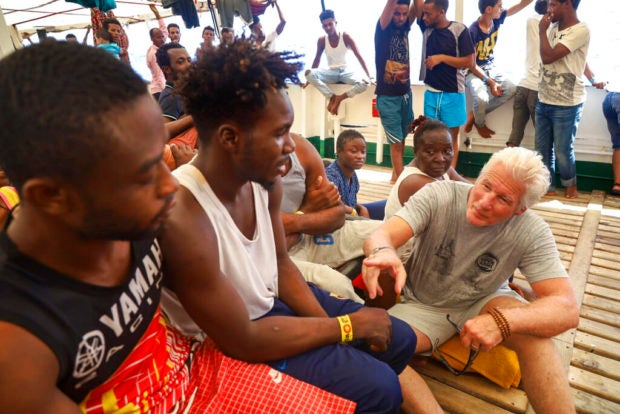 He happened to be in Italy this week and after seeing news about the boat’s plight, contacted the Spanish charity Open Arms and asked “How can I help?” a spokeswoman for the group told The Associated Press.

Two days later Gere was on Lampedusa, helping load a boat with supplies.

“The most important thing for these people here is to be able to get to a free port, to get off the boat, to get on land and start a new life,” Gere said, urging the world to “please support us here on Open Arms and help these people, our brothers and sisters.”

Other European countries have yet to respond to the aid group’s request for a solution to the impasse over the rescue ship.

The International Organization for Migration says 39,289 migrants and refugees have reached Europe by sea so far this year as of Aug. 4, about 34% fewer than during the same period in 2018. It says another 840 people have died this year on the dangerous Mediterranean crossing from North Africa to Europe. NVG