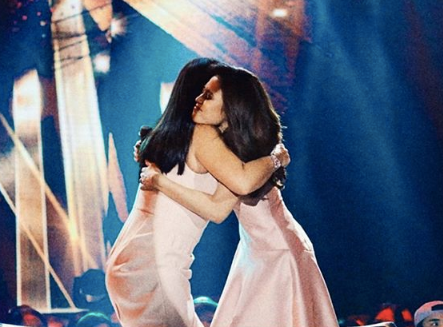 Toni Gonzaga fulfilled her longstanding dream of performing with her inspiration and idol, Asia’s Songbird Regine Velasquez, on “ASAP” recently.

Gonzaga shared the memorable event on her YouTube vlog on July 31, telling her fans she grew up watching and listening to Velasquez.

“I wanted to be like her… I would sing her songs in every audition. And I would watch all her shows and concerts hoping one day I could meet her and sing with her,” Gonzaga said in her vlog. “Walking up to this stage reminded me of the many years I sang at hotel lounges, bars, restaurants and all the auditions that rejected me.”

There came a time in Gonzaga’s life when she realized that, perhaps, her dream of ever becoming a singer was just not for her.

“So I tried other things… After all those years of struggling as a singer my biggest break came as a commercial model. Eventually became a host and an actress and nobody knew that I could sing. God had a different plan… And his plan seemed like it was going further away from my dream and my first love.”

She also said that while she celebrated every major milestone in her career and personal life, she still nurtured the hope of sharing the same stage with her inspiration. But when she saw young and aspiring singers having duets with Velasquez, she decided to surrender her dream to God and accept her reality with peace.

Her dream finally came to fruition when she guested on “ASAP” last July 28 and shared the stage with her idol. The two sang a medley, including one of Gonzaga’s own songs, “We Belong.” It was a moment that, as per Gonzaga, even she never imagined would happen in her wildest dreams.

“Now I’m sharing the same stage with my idol. Pwede pa palang mangyari (so it is still possible),” she said. “I can’t believe she’s singing my song?!?!?! I always thought in my head it would be the other way around.”

“It took me 20 years before I got to experience this and the best thing about the wait was when it finally happened,” she added. “Thank you ‘ASAP’ for making it happen. Thank you Ms. Regine… You don’t know how much this moment means to me.”

Gonzaga’s vlog about her performance with Velasquez may be viewed below. Cody Cepeda /ra