(Editor’s Note: This begins another series on the triumphs and struggles of actors with Filipino heritage in Hollywood.)

LOS ANGELES—“It is wonderful playing a Filipino character,” said JB Tadena, who recurs as Johnny Bayani in Season 2 of CBS’ “SEAL Team,” which was renewed for a third season last May.

A graduate of Pennsylvania State University, JB worked as a satellite engineer before deciding to become a full-time actor. His other television credits include “Hawaii Five-0,” “NCIS: Los Angeles,” “Agents of S.H.I.E.L.D.,” “Venom,” “Grey’s Anatomy,” “American Horror Story” and “Criminal Minds.” He will also be seen in HBO’s “Westworld” next year.

Asked if he misses being a satellite engineer, JB answered, “I worked with a lot of great people and that’s what I miss most. But I was surrounded by geniuses and I’m honestly just a hustler, and I was never really happy doing the work. I don’t miss it at all.”

But on his journey from being a satellite engineer to an actor, JB admitted, “Sometimes, when times are tough, I think about whether or not I made a huge mistake. It was my father’s blessing before he passed for me to pursue this, so I know in the end, I did the right thing. It was always in my head that this is what I wanted and my family knew that.

“But I also look back at the time when I was an engineer as a great life experience. There was stuff I would never have learned if I only pursued acting. So, I’m grateful for that time, as well. I imagine myself in my 20s making horrific decisions, so it’s probably all for the best.”

How would you describe your journey as an actor so far? It’s crazy because every single actor in this town has a unique journey and not one journey is the same. But, at this point, I would describe my career as “workman-like.” I was a satellite engineer for seven years.

I came out to Los Angeles with no friends and absolutely no idea where to start. And while the hustle never really ends, that’s all it was for the first year and a half. I did research on how the business works, took classes, did networking, auditions, experienced rejections, etc.

Finally, I was offered a role on a television show after a number of auditions in that particular office. Since that first booking, it’s been slow and steady with ups and downs, as everyone knows. But I have been very fortunate to play with some elite talent in really fun roles. 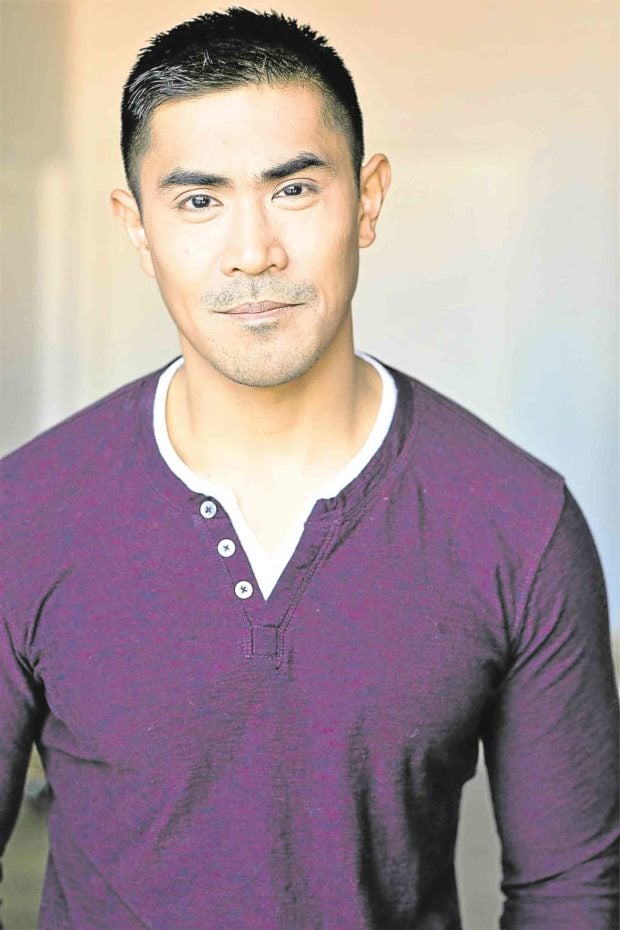 How do you prepare for an audition? Any good luck rituals? What I do is actually pretty standard. I read the script, read the sides over and over. I never really had a process until I studied at the Warner Loughlin Studios. They helped me develop a way to create a fully realized character in a short time, and also helped me tap into my vulnerability.

After putting in the scene work, and this was something I was apprehensive to do at first, I meditate every day. It keeps me balanced, open and grateful, which in turn makes me a better actor. The moment before the audition though, I listen to a soundtrack of songs I created for the character that help me get into the moment.

What is the most frustrating part of trying to land roles in Hollywood? While diversity has made great strides in recent years, it’s still not where it should be. Asian-Americans were only 5 percent of broadcast TV leads, and even less for cable.

And even though Filipino-Americans are the second largest Asian-American demographic, we’re still severely lacking in representation. Call it a subconscious bias or sticking to the status quo—there’s a lot of room for improvement here. Our fight for representation outside of stereotypical characters is still ongoing. But there’s hope and the strides for change can’t be overlooked.

How do you handle rejection? I used to take it personally. And I’d be lying if I said I didn’t let it get to me at times. But in a profession where rejection is constant, I had to reframe my thinking growing up and change my “hard work leads to results” mindset.

A common theme that I’ve learned from many brilliant actors who have had longevity in the industry is that you have to have a life outside of the business. You have to be excited about things in your life that may have nothing to do with the industry.

And as corny as it sounds, as soon as I made the decision to practice gratefulness, to meditate, to have life experiences, then it made the rejections that much easier to take. And a great consequence of this is that you become a better actor, as well.

Have there been times when you almost gave up? As I mentioned, the first year and a half I was out here, I hustled my ass off every day. And it seemed like I was just banging my head against a wall and nothing was happening. There was one day—I was coming home from a pretty terrible workshop, dressed in a full suit. When I got to the apartment, I walked into my shower, full suit still on, turned on the water and just plopped down on the ground, thinking that I just made the biggest mistake of my life.

I gave up a great job and came out to LA to become an actor. What the hell was I thinking? Well, the next day I received a call from my agent saying that I was directly booked for a role in “Grey’s Anatomy.” And it happens like that a lot of the time, where you feel like you’re at your wits’ end, then “boom.” Things can change on a dime.

Honestly, my motivation to keep going is the fact that there really isn’t anything else I want to do.

Do you, as an actor of color, feel that opportunities for minority actors are improving or getting worse? Are you encouraged by the acclaim that three recent films focusing on Asian-American stories—“Crazy Rich Asians,” “Always Be My Maybe” and “The Farewell”—received? They’re improving for sure. I’ve seen a tiny uptick in the opportunities I have gotten. The setback from this is that there is a fair amount of myopia, where the same group of more well-known actors and actresses from these films are offered the majority of the roles. Credit where credit is due because that is a phenomenal group, and I have much respect for them for paving the way.

But the more representation that actors of color are given as a whole to make diversity the norm instead of the exception, can only be a good thing.

What’s your stand on whitewashing—or the casting practice in which white actors are cast in nonwhite character roles—in Hollywood? Oh, it’s completely bogus. The fun thing about it is that social media really has given a voice to the underrepresented and the calling out of these films has led to negative feedback and results for some of these films. It’s also given us great jokes for some specific performers, who I will keep unnamed. But you can easily Google that. I’m excited for the near future where this practice is obsolete.