LOS ANGELES—Playing a fading star in Quentin Tarantino’s new film had Leonardo DiCaprio recently talking about the fickle nature of his acting profession.

While Leonardo is one of the few actors who has stayed on top over the years, the career of his actor character in “Once Upon a Time in Hollywood” is going down, being relegated to playing the “heavy” in TV shows in 1969, the movie’s setting.

DiCaprio (left), as a fading star, is consoled by his friend and stunt double (Brad Pitt) in “Once Upon a Time in Hollywood.” —SONY PICTURES

Leonardo’s emotional reaction to these moments is moving. His best friend and stunt double, Cliff Booth (Brad Pitt, equally fine), tries to cheer him up by saying, “You know, you are Rick f**king Dalton.”

And Leonardo’s reaction when a child actress (a terrific Julia Butters in a cameo) whispers a compliment to his depressed TV actor character is priceless.

Excerpts from our chat with Leonardo in Los Angeles:

How did you relate to your character, Rick Dalton? Although my career trajectory had taken a different course, I immediately connected with Rick. It’s intrinsically somebody that I knew, growing up in the industry. 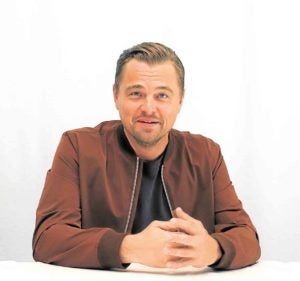 In a lot of ways, he’s a man dealing with his own mortality. We are in an industry where you become immortalized by film and television, but he’s realizing that the culture and the industry have passed him by.

It was interesting for me to go on that learning process with Quentin because he’s not only a great historian, but also a cinephile.

And there are a lot of different actors, from Ty Hardin, Ed Burns, William Shatner to this guy named Ralph Meeker, whom I clung on to as a real inspiration, somebody whom I wasn’t familiar with but had done some amazing work, and one whom Quentin considers one of his favorite actors of all time.

And within this two-day construct, I wanted to convey his realization that he needs to stop feeling sorry for himself and that there is always opportunity out there.

What thoughts came to your mind about the vagaries of fame, about how fleeting it is? I know the percentile of hitting the Lotto ball to be a working actor and also to be in control of your own destiny artistically. It’s like hitting the lottery.

And I also know, as you mentioned, that a career is fleeting. When I was very young, I looked at it as a long distance race. You have to pace yourself.

I understood it because I think there are attributes of self-doubt in him (Rick) that are universal in all of us.

Speaking of freaking out, when you are unhappy with your performance on certain days, do you also throw things like Rick Dalton does? Every one of the actors that I have spoken to, certainly today, have all had those moments, whether it be from exhaustion or whatever it is, where you cannot get the line out (laughs).

So much of your job is trying to make the camera and the crew disappear and be in the moment.

But then, the realization that everyone is watching you and you just cannot step up to the plate. A lot of that was created with Quentin and myself to exemplify. That wasn’t in
the original screenplay—that whole sequence with the messing up of the lines, then into the trailer.

It’s your first time to work with Brad Pitt in this film. How well did you know each other beforehand? Only peripherally. We share the same understanding of film and this city and growing up in the ’90s, sort of having our careers spark at the same time. There was an immediate understanding and a familiarity with what the genre was about.

More importantly, that relationship between a stuntman and an actor that evolves beyond being professional. They become your family.

Quentin gave us this amazing catalog of the films our characters have done together, the stories and encounters that we had. So, as soon as we stepped on set the first day, we were those guys. It was a strange experience.

And Brad’s Cliff said a line to me that, on the first day that I hearken back to, that in a weird way defined our relationship, when he says, “You know, you are Rick f**king Dalton.”

I remembered that line, because that’s the type of support in this isolated industry that could be very tumultuous. Those words of support.

So, working with Brad was terrific. Not only is he incredibly talented, but he’s made some really out of the box choices.

Can you talk some more about your friendship with Brad? Do you hang out and play poker now? Brad is a great guy, an incredible professional, incredibly talented. There’s an ease to working with him. Do we play poker? No (laughs).

The connection we have from the past is “Growing Pains.” We were both in that television show—he in the late ’80s, me in the early ’90s. He was in two or three episodes. I came in on the last year of “Growing Pains,” and they let me out to do my first movie when I was 15, “This Boy’s Life.” That’s about as close as we have of ever gotten to work together.

You were born in 1974, five years after the events depicted in the film. What was your awareness of that era, of the Vietnam War, hippies and all? It’s interesting because my parents are still hippies (laughs). I have told this story with Brad a lot. When five blocks of Hollywood Boulevard was completely re-dressed in 1969 (for a scene), they had head shops and hundreds of hippies walking up and down when we were driving in the car.

I said, “No, no, (laughs). He’s just visiting. That’s him with the sandals and Hawaiian shirt, and that’s his wife with the turban on. That’s how they are every day (laughs).”

But talking about that era, I didn’t grow up in this time period, but I felt connected to it because what happened culturally with the (Charles) Manson murders was the end of the dream of the hippie/peace revolution in a lot of ways. That’s according to what my father has told me.

It was this creepy mildew that was permeating. It caused a massive amount of mistrust and it was a darkness.

There was a dark tapestry there that changed that culture forever. And more importantly, what that culture represented globally.

In the movie, Rick is excited that Roman Polanski is living next door to him. Who was your most interesting neighbor in real life? Stan Lee lived in my neighborhood, and I got to meet him. My father was an underground comic distributor in Los Angeles. We used to go around in his station wagon every weekend, delivering comic books all over town from Hi De Ho and Golden Apple Comics.

Stan Lee was always this incredible icon to me as a child. I collected Marvel comic books, and finally getting to sit down with Stan and talk to him about all his amazing creations … He lived in my neighborhood, and I had a few moments with him before he passed away.

What comes to your mind when you hear “Hollywood”? So many things—my whole existence (laughs). I grew up in and I was born in Hollywood. I grew up by Hollywood Billiards, on Hollywood and Western.

What was interesting growing up in that time period is, and also seeing 1969 Hollywood, I always had a glamorous, idealized imagination of Hollywood.

But how downtrodden it was when Quentin recreated 1969 Hollywood, with the tie-dye shirts, hippies and the head shops and this subculture that was brewing. I guess that carried into the ’80s when I grew up.

But interestingly enough, I always say this, the only reason that I am an actor is because I live in Hollywood. I had dreams of becoming an actor, but I never felt part of that club. It was always something that was weirdly intangible.