“Let’s stick to the facts. Please swipe,” Barretto captioned a series of photos via Instagram Wednesday.

Barretto attached screenshots of a certain hotel’s Facebook page thanking Julia and Gerald for staying in their establishment.

The screenshots recently went viral with some netizens pointing out the hotel shared the posts on the same date. 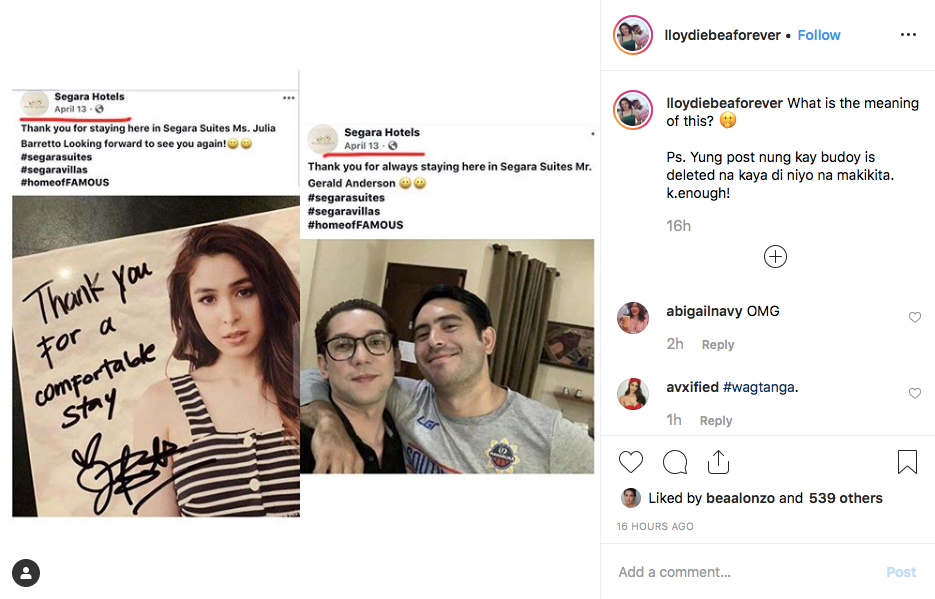 “April 12, 2019: Between Maybes shooting in Subic. Location: Sagara Villas. Each actor [was] provided one room each as standby area with personal assistants, glam team, and production staff coming in and out of their respective rooms,” Barretto explained.

Julia and Anderson worked together as a fresh tandem in the romantic drama film “Between Maybes” that premiered last May.

Barretto also attached a screenshot of filmmaker Mikhail Red’s Instagram post, pointing out that Julia was in the set of of her upcoming film “Block Z” a day after the hotel’s post was shared.

This was after a netizen posted photos of Julia and Anderson supposedly taken at the birthday party of fellow actor Rayver Cruz.

Meanwhile, Barretto said she is planning to take legal action against the Instagram user who uploaded the photos.