Nadine and Sam on doing romantic scenes in ‘Indak’: It’s like incest 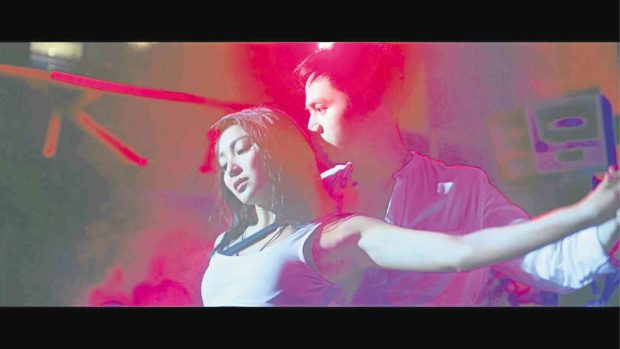 Because they’re good friends in real life, Nadine Lustre and Sam Concepcion admitted that they couldn’t help but feel a tad “awkward” when they had to do romantic scenes together for their upcoming dance flick, “Indak.”

“It’s like …” Nadine said, turning to Sam and nudging him, as she tried to get the right word off the tip of her tongue.

“It’s like incest!” Nadine echoed her coactor, before bursting into giggles at a recent press conference for the film, which opens in cinemas on Aug. 7.

But kidding aside, the 25-year-old star said it was a breeze working with Sam, and that they never let their friendship get in the way of portraying two dancers trying to find their groove.

“We want to give performances that are real or believable. So, even though we’re close, we can’t have that wall between us,” she said when asked by the Inquirer how they managed to build chemistry for the big screen. “We’re actors, so we have to be professional.”

Besides, whatever awkwardness they might have had would disappear whenever they hit the dance floor. “Sam would always tell me to be comfortable in my body and just feel free to express myself,” she said.

If she were to assess her skills, she said she couldn’t consider herself a “very good” dancer just yet, or that she’s already content with what she can do.

In fact, she was feeling rusty when they started rehearsing with the G-Force dancers, because she hadn’t done it seriously for quite some time.

“Of course, I want to continue training. It’s important that we never stop learning,” pointed out the actress, who took their practice sessions to heart, even if it meant waking up all sore the next morning.

“It wasn’t easy because the dance routines we did were for competition [level]—hataw kung hataw,” she said, adding that the adrenaline rush she gets from dancing makes all the hard work worth it. “It was tough, but we enjoyed it at the same time,” she stressed. “We’re passionate about about what we do.”

And despite the physically taxing choreography she had to pull off, Nadine didn’t resort to using a dance double.

“As much as possible—if there are difficult steps, lifting, etc.—I want to do those things. I want to experience them myself,” she said.

Directed by Paul Alexei Basinillo, “Indak” has Nadine playing Jen, an island girl who couldn’t bring herself to show off her talent to other people because of a past trauma.

But unknown to her, a video of her dancing went viral and caught the eye of Vin (Sam)—
leader of the dance group Indak Pinas—who invites her to join them as they prepare to join a competition in South Korea.

Nadine had an affinity with her character, she realized, because their life journeys mirrored each other: Both had to wrestle with insecurities on their way to finding themselves and, ultimately, success.

“I used to doubt myself … She (Jen) also taught me to push myself more in order to achieve my dreams in life,” she said. “If you fall, get back up … Don’t be afraid to chase your dream, because the moment you doubt yourself, you can lose it.”

That’s how Nadine’s own career seemingly unfolded. Seventeen years after she made her TV debut as a child host, she’s now an Urian- and Famas-winning actress. “Maybe it’s just my time, my moment. I don’t think this is going to last forever,” she said.

What’s important at the moment, Nadine said, is to simply continue being herself, and not let the pressure that comes with her trophies affect her mind-set.

“It’s hard to have that at the back of your mind; that you have to please everyone and surpass your past work,” she said. “I want to have fun and enjoy what I do.”