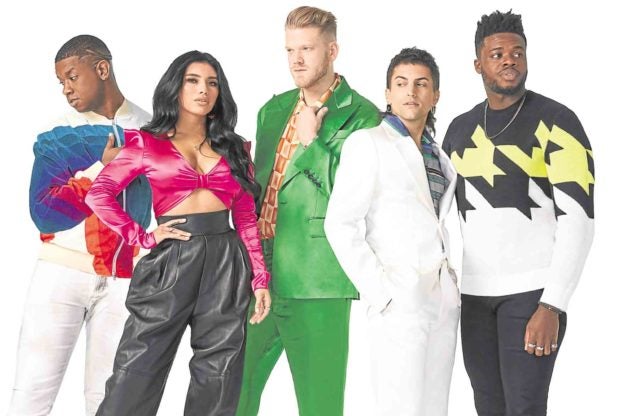 Pentatonix, the first a cappella vocal ensemble to have a No. 1 album on the Billboard 200 chart, is set to bring its upcoming, self-titled world tour to the Smart Araneta Coliseum on Feb. 8 next year.

This will be Pentatonix’s third visit to the Philippines, but a first for Matt, who replaced the group’s founding bass singer, Avi Kaplan, in 2017.

The American musical group first rose to prominence after winning the third season of the singing competition “Sing-Off” in 2011. It has since released seven studio albums, viral covers, original hits and records that won for them three Grammys. Its YouTube channel has 17 million subscribers with four billion video views. Its latest video upload is a timely and spirited cover of “Can You Feel the Love Tonight,” from “The Lion King.”

In an interview three years ago, Kevin said that while they tried experimenting along the way, it’s by staying true to their roots that they ultimately found success. “We just have to maximize what we have—and that’s our voice.” —ALLAN POLICARPIO