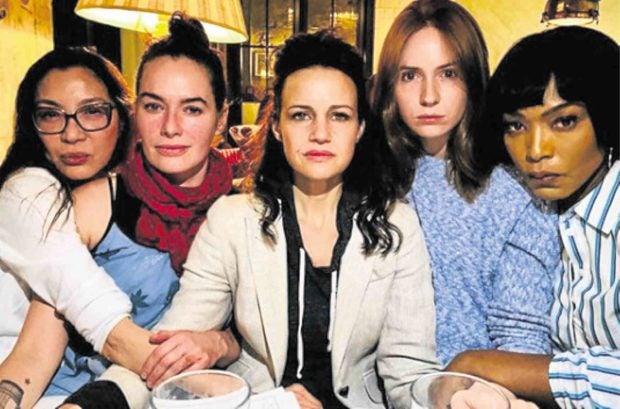 One thing that’s already certain is that those ladies enjoyed hanging out on the Berlin set, and they have a couple of wacky, behind-the-scenes Instagram posts to prove it.

When the cameras aren’t rolling, the gals upload videos of their offscreen shenanigans, to pass the time—and, quite possibly, to promote the movie codirected by Aharon Keshales and Navot Papushado.

Headey, in short videos, pretended to be different characters in her trailer, including a fortune teller and an elderly villager. In a separate video, she pretended to accuse Gillan of stealing her Peruvian nuts (the latter disposes of the evidence just in time).

The “Game of Thrones” star and “Watchmen” actress Gugino, in another video, were found “napping” during their lunch break, in a spooning position.

Headey, in yet another post, ran into Yeoh at a makeup trailer, giddy to meet the seasoned action star—but the bemused “Star Trek: Discovery” actress sternly tells her, “F**k off.” Both women exchanged knowing grins seconds later.

And, all five women shared and reposted a video of them doing exaggerated, seemingly drunken catwalk poses before stumbling onto the floor.

Gugino, sharing a group photo a few days later, said, “Just a few of the many faces of the ‘Gunpowder Milkshake’ ladies.”

Addressing her costars, she added, “Missing you all and Berlin as some of us begin new adventures. Continue kicking ass across the pond! Keep the fire burning, beauties. Thanks for your silliness, camaraderie and big-hearted inspiration.”

“Gunpowder Milkshake,” according to reports, is about estranged mother and daughter assassins (Headey and Gillan) facing a male-dominated group of killers. It will be released in 2020.—OLIVER PULUMBARIT