How having a child with special needs changed Martin Nievera 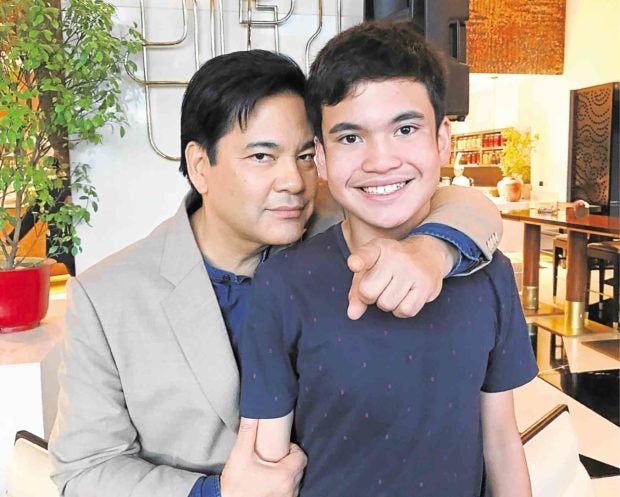 He wasn’t the best husband, but at the very least, Martin Nievera said, he could strive to be a better father.

Having Santino, his 12-year-old son with former partner Katrina Ojeda, has been especially transformative for the balladeer. Because Santino is a child with special needs, Martin has had to redefine what his earlier notions of what being a parent entails.

“He has really changed me a lot. I’m definitely more patient nowadays than I was with my elder sons (Robin and Ram, with ex-wife, Pops Fernandez),” Martin told the Inquirer in a recent interview, after renewing his contract as the ambassador of Solaire Resort & Casino for two more years.

Raising a child with special needs presents a unique set of challenges. But luckily, he feels he’s well-equipped to effectively address some of those.

“His special needs goes well with my specialties. If he wants to hear someone talking funny, I can give him that. If I need to be silly, I’m exactly that guy. If he needs a cartoon character on the spot, I’m right there,” he related. “And I love every minute of it.”

“He’s quick and knowledgeable with gadgets. He knows his way on the internet… If I let him use my phone, for instance, he would return it to me with its settings all changed,” Martin said of his youngest child. “He loves the microphone. Once he gets a hold of one, he wouldn’t let it go. He’s such a ham!”

Santino resides with his mother in Las Vegas. But while he and his son live thousands of miles apart, Martin makes it a point to visit and spend time with him as often as he could.

“All credit goes to the mom. We’re no longer together, but we’re still friends. And because of that, I find myself going to the States a lot more often. Because of Santino’s condition, I feel like he needs to have that family atmosphere,” he said. “The first thing he says when we are together is, ‘Look, we’re a family!’ His quips sting sometimes! So I try to be really hands-on.”

More present than ever

And now that Santino is in his preteens, Martin feels the need to be more present in his son’s life.

“Perhaps this is God’s way of saying that Katrina’s time is her time. But now that he’s becoming a man and starting to have young-man issues, I believe that this is my time to step in. We do a lot of things together. He has a different aura when he’s with me,” he related.

If he had his way—if he need not work as a performer in the Philippines—Martin would gladly spend every single day with Santino. But even then, the bond between them, he said, is inexplicably strong.

“I don’t know what it is. I can’t say I’m the good guy, because I do scold and discipline him more than his mother does,” he said. “So I don’t know how this bond came to be—this despite us being far apart most of the time. But I’m grateful for it.”

This time, it’s Santino’s turn to stay in the country for some quality time with his father. The boy turned up at Solaire’s Waterside restaurant, where this conversation was taking place. Martin had warned us that Santino’s quite the hugger. True enough, he did greet us with one.

“I try to bring him wherever I go,” Martin said. “I want to continue on getting to know him better.”
Growing more empathetic
Because of Santino, the 57-year-old recording artist has grown to become more empathetic toward other parents who also have children with special needs.

Although being a father to Santino is a joy, it isn’t without the occasional heartaches, which come mostly from encounters with people who lack sensitivity and understanding.
One particular instance comes to his mind—Santino being rejected by a receptionist at a playschool in Las Vegas because he’s a “special child.”