3rd pregnancy not as ‘emotionally draining’ as Camille’s last one 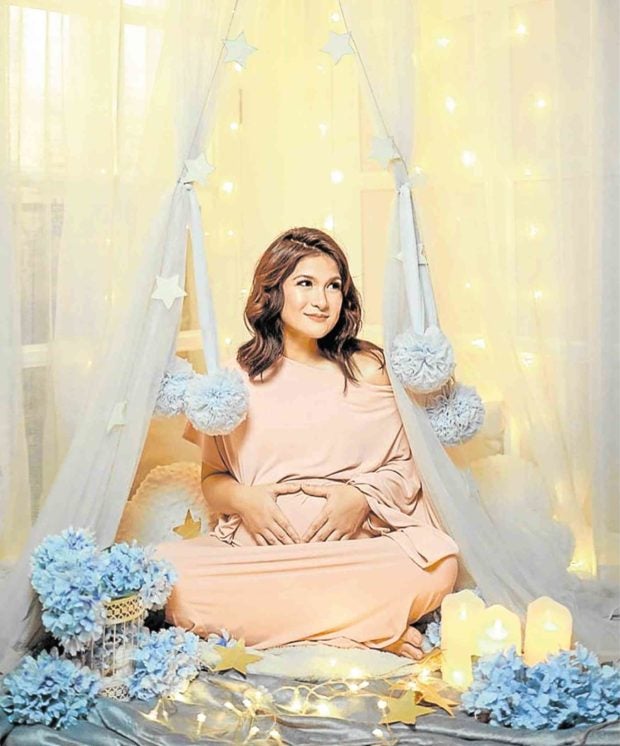 Camille Prats, who has just given birth to her third child, is willing to go back to hosting her show “Mars Pa More!” as soon as possible. But doing a new drama series is out of the question for now, she said, and would have to wait six more months, at the very least.

“I’m OK doing ‘Mars’ right away, because it’s relatively lighter work. It’s not that tiring because we do only three segments per episode. I can also bring the baby with me to the set,” she told reporters at a press conference for the said magazine show, a couple of days before welcoming a baby boy, whom she named Nolan Cristiano, on July 10.

“Doing a soap opera is much harder—you are on location and work longer hours. I don’t think I can do that, because I’m planning to breastfeed my baby for a year. So, I asked GMA Artist Center to give me six months to prepare, if I were to do a series,” she added.

Although this pregnancy was tough, physically, the 34-year-old actress said she was thankful that it wasn’t as emotionally or mentally draining as the last one.

“I was like a different person, emotionally, during my previous pregnancy. I was so  sensitive,” she recalled. “But this time, it was less complicated. That’s why I could still tape episodes a few weeks before my due date.”

She has a 1-year-old daughter, Nala Camilla, and 15-year-old stepson, Isaiah, with her husband, VJ Yambao. She also has an 11-year-old son, Nathan Caesar, with her late husband Anthony Linsangan.

“Our last two babies were unplanned. We now have four children … We have decided to not have any more,” Camille related.

One of the first celebs to visit her in the hospital was Suzi Entrata, who had been her “Mars” cohost for almost seven years. However, as part of the family-lifestyle program’s reformat to “Mars Pa More!” and transfer from GMA News TV to GMA 7 on July 8, Suzi was replaced by Iya Villania.

The two friends had a tearful last day. “We cried. She has always been family to me; we know each other so well. A lot of the things I learned in hosting I got from her,” she said of Suzi, whom she considers a “mentor.”

But the good thing, Camille added, is that Suzi can still be seen in “Unang Hirit,” which precedes “Mars’” new time slot. “She was sad of course, because she loves the show. But she understands that it’s work. It is what it is,” she said.

While she has yet to work with Iya on a project, Camille said they have known each other for a long time. “We message and ask each other about mom stuff. It’s nice to have that relationship off-camera,” the actress related.