Dazed Liza Soberano tells Enrique Gil: ‘Who are you?’

MANILA, Philippines — A confused Liza Soberano failed to recognize her boyfriend Enrique Gil who was at her bedside after she underwent another finger surgery in the United States.

“Who are you?” Soberano asked Gil in an Instagram story posted Thursday by her aunt Joni Lyn Castillo-Pillarina.

The 21-year-old Kapamilya actress in an Instagram live stream on Thursday explained she underwent two-finger procedures and was groggy because of pain medication.

“So today I had surgery. I actually had two procedures done. I had the interphalangeal joint infusion which literally means that they fused both of my bones on my fingers. There is still hardware in it to keep it together,” Soberano said. 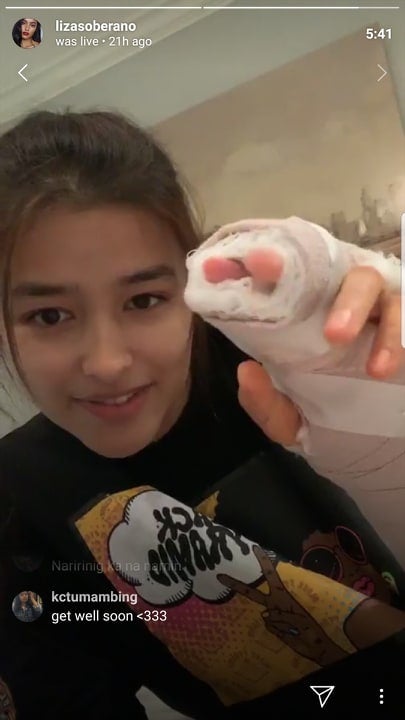 “I also did iliac crest graft harvesting which is when they take bone from your hip and they put it in my finger basically because I had a lot of bone loss in my finger due to the infection. And basically, some of the bone was dead too,” she added.

“I’m kinda groggy from the pain medication and I just literally got out of the recovery room,” she further said.

Soberano flew to Los Angeles months ago to undergo a series of finger surgeries, after she suffered a finger bone fracture during the set of her drama fantasy series “Bagani” in August 2018.

Soberano’s finger injury is the reason she withdrew from her movie project “Darna.”

Meanwhile, one fan asked if she will be able to go home this month and Soberano said, “Yes that is the plan. I really really really wanna go home now because I miss the Philippines, I miss working. I miss everybody there. I miss my old life my normal life.” (Editor: Katherine G. Adraneda)