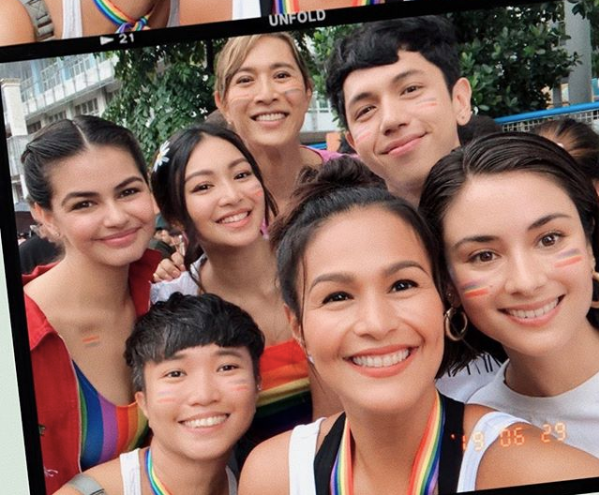 Celebrities showed their support for the LGBTQ+ community during the Metro Manila Pride march held on Saturday, June 29, in Marikina City.

Among the attendees was actress Nadine Lustre, who was all smiles as she danced in the parade in a Pride flag-inspired crop top.

Sharing with you kung paano kami naging instant bouncer ni Nadine Lustre during the #Pride2019 It's sulit namang maiipit knowing that this beautiful lady is an ally. #NadineLustre is beyond beautiful. ❤️🌈😍 #ResistTogether pic.twitter.com/JKvdROPZRG

The “Never Not Love You” actress was praised online not only for her presence as an ally, but also for her low-key donation to the cause. She was listed among donors as “Alexis Lustre” for an undisclosed amount.

Prior to the parade, Lustre called for donations to the Pride march on her Instagram Stories.

“Notice how she uses the name Alexis. Humility at its best,” said Twitter user Vee (@ofrosesandpoets). “I stan a strong independent woman who is an intellectual, multitalented, a brave woman who never is afraid of breaking norms and is for gender equality.”

Nadine Lustre. I stan a real queen. Notice how she uses the name Alexis. Humility at its best. I stan a strong independent woman who is an intellectual, multitalented , a brave woman who never is afraid of breaking norms and is for gender equality. #PrideMonth #ResistTogether pic.twitter.com/zrjn7pkOGo

Lustre was also seen holding up a sign that said “LGBTQ+ rights are human rights.”

Other celebrities who attended the march were actresses Iza Calzado and Janine Gutierrez, director Samantha Lee and model Mari Jasmine.

The parade had the theme #ResistTogether as a stand against discrimination toward the LGBTQ+ community.  /ra

Angie Mead King on how Facebook outed her as a transgender to friends, contacts