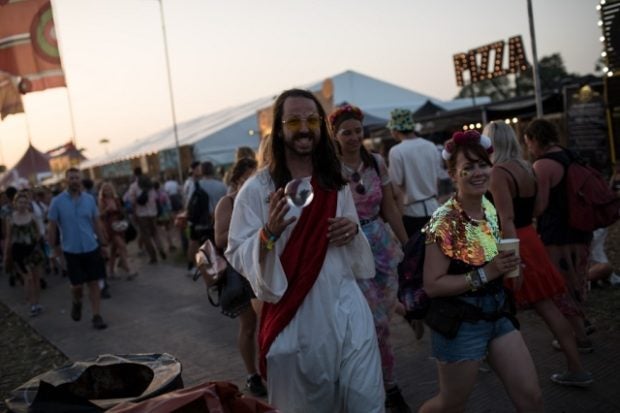 Festival-goers in fancy dress walk through the West Holts area on the third day of the Glastonbury Festival of Music and Performing Arts on Worthy Farm near the village of Pilton in Somerset, South West England, on June 28, 2019. Image: AFP/OLI SCARFF

This year’s Glastonbury music festival featured headliners such as Miley Cyrus, around 130,000 ridiculously happy fans and some shamans on a mission to keep the planet green.

Kurikindi, a 48-year-old from Ecuador, walks around shirtless in a tipi camp, where he has lived since Thursday with a dozen or so other spiritual leaders from places ranging from Japan and the United States to Peru.

They are all part of the “Wisdom Keepers”, a group that wants to use the “merging interface of ancestral indigenous traditions and festival culture” to save the world from a potential environmental catastrophe.

Kurikindi spends part of his time living with 16 others in the Ecuadorian rain forest, where he leads a “life of freedom, enjoying nature and not worrying about buying food… because you can go fishing in the river,” he tells AFP.

Most of the time, however, he lives with his wife in London, where he teaches shaman traditions and tries to heal people from the various addictions they acquire in modern life.

Kurikindi’s parents were both shamans, and his appearance at one of the world’s biggest music festivals comes with concerns and support for environmental causes surging in Britain.

Much of it comes thanks to Extinction Rebellion, a group formed last year by British academics and activists, whose colorful protests brought parts of London to a halt for nearly two weeks in April.

Extinction Rebellion and Greenpeace organized Thursday’s opening ceremony, making this Glastonbury the most environmentally aware in its 49-year history.

The opening ceremony allowed partygoers to “see that what happens to the Amazon, what the people are facing, the devastation — it’s coming here,” Extinction Rebellion spokesman Ronan McNern told AFP.

“Their indigenous knowledge is needed to live in line with what we are facing,” said McNern.

“We are all connected.”

Glastonbury has always embraced dialogue and been open to new ideas, even back when this dusty field in a southwestern corner of England still functioned as a dairy farm.

This year’s dedication to the climate cause began with a complete ban on single-use plastic bottles. At the last event here in 2017, more than a million were sold.

So, in stifling heat, hot and thirsty festival goers patiently lined up to fill their flasks and reusable containers at one of the 37 water points.

The other option was buy liquids in a can, which campaigners believe are easier to recycle.

When hungry, fans picked through tables filled with vegan options. All the cutlery, cups and plates were biodegradable. And 400 volunteers made sure that everything possible was recycled.

Strolling across 350 hectares (865 acres) of fields filled with open-air stages, fans faced signs instructing them not to urinate in the local river.

It was not an idle warning.

“The festival is doing the best it can,” Kurikindi said, while admitting that there were still some people who did not understand — or ignored — the new rules.

“It pains me to see this plastic, all this waste on earth,” said the shaman.

But “little by little, humanity is learning,” he said on an optimistic note. CC

How to get tickets to next year’s Glastonbury Festival

Read Next
Kris Aquino is principal sponsor in Angel Locsin and Neil Arce’s wedding
EDITORS' PICK
SM continues to send relief assistance to remote towns in Batangas
Batangas execs, Taal evacuees thank House; hopeful on rehab efforts
‘A greener, cleaner tomorrow’: A how-to guide for Filipinos who want to help with today’s energy crisis
5 years after Mamasapano, son of fallen SAF 44 trooper remembers his ‘idol’
Get exciting deals and discounts when you download the new McDonald’s App
PAL: Passengers with flights to parts of China may request for refund, rebooking
MOST READ
Dina Bonnevie on Coney Reyes: We have forgiven each other
No time for revelry; Tagaytay instead plans for alert level 5
Megan Young, Mikael Daez get married
Taal’s sulfur dioxide emission increases
Don't miss out on the latest news and information.