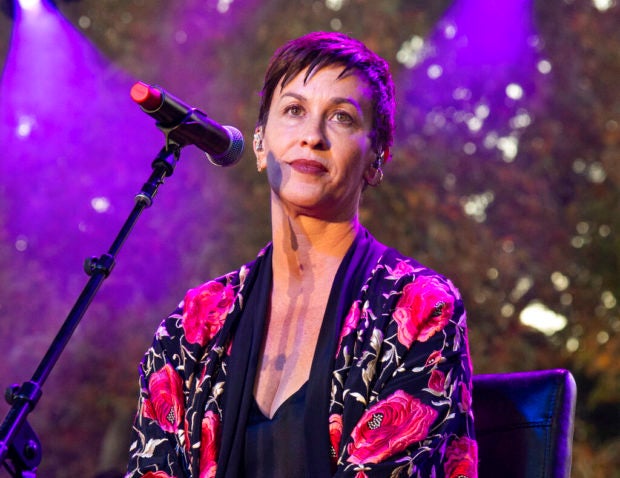 This Dec. 2, 2018 file photo shows singer Alanis Morissette at One Love Malibu in Calabasas, Calif. Morissette is pregnant with her third child. The Grammy-winning singer posted a black-and-white photo of herself Monday to her Instagram account, revealing her round belly while also singing with headphones covering her ears. Her representative confirmed the pregnancy to The Associated Press. Image: AP/Amy Harris/Invision

Singer-songwriter Alanis Morissette kept it real when she recently opened up on pregnancy and postpartum depression.

Morissette, who is married to American rapper Mario “Souleye” Treadway, is 45 years old and pregnant with her third child. She first gave birth to son Ever in 2010 and then daughter Onyx, who turned 3 this June.

“It’s this whole chemistry of emotions,” Morissette said of pregnancy in an exclusive interview on SELF on June 26. “Hormones and chemicals that are just coursing through your body. It [can] be triggering, or flash backing, or re-traumatizing.”

It was noted she gave birth to Ever and Onyx at home, in the presence of her midwife, doula and husband. But her midwife was delayed and Morissette felt she had to be her own coach.

“I felt I was the coach. ‘She’s coming, you don’t have to manipulate anything,’” she recalled saying. “‘The next contraction she’s coming out, I guarantee it.’”

She also opened about her personal experience with postpartum depression, describing the feeling as akin to being “covered in tar.”

“For me I would just wake up and feel like I was covered in tar and it wasn’t the first time I’d experienced depression so I just thought, ‘Oh, well, this feels familiar, I’m depressed, I think…’” she added. “It does feel like tar, like everything feels heavy.”

For her third pregnancy, Morissette will be tackling postpartum depression differently after she gives birth in a few months. This time around, she said she would no longer be relying on herself to diagnose herself.

“Because the first time around I waited,” she said. “Often what had pulled me out of my depression pre-family was service. Service for me has been through my songs… And then I had my various forms of self-medicating [that also didn’t help]. So, creativity’s not doing it, tequila’s not doing it… and I even sang about it.”

As she and her little brood await the latest addition to their family, Morissette admitted she still feels a bit dissociated when it comes to the archetypal role of mother.

“I still have moments where it feels like it’s not dawning on me that I’m a mother. But when I look at them, I just think I’m so responsible for you…” said Morissette. “I think a lot of women who had one way of life, myself included, and [having a baby created] a complete sea change overnight.” Cody Cepeda/JB