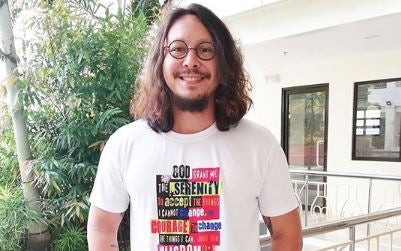 Actor Baron Geisler did not hold back when it came to answering questions about his battle with depression, drug use and alcoholism in the past.

Geisler was the first actor in the cast of ABS-CBN drama series “Tabing Ilog” to be given a television series of his own — an opportunity that many people would not throw away. At the time, however, Geisler treated work as just a hobby and would bring his drinking habits to the set as if it were a party.

(I guess it was just a party to me because, of course, I came from an okay, well-to-do family, so when I was working, it did not feel like work to me, like it was just a hobby.)

(I did not take it seriously, eventually they did not take me seriously until I lost everything and that’s the saddest part about that.)

As per Geisler, his father, Donald, passed away that year and he could not handle the situation because he had no God.

(My god during that time was my parents, for me that was my mind-set, so I was not looking at anything else. And then when my dad died, I wanted to go with him to the grave, I almost took my life.)

Geisler never lost his love for acting during those turbulent times, adding he was still finding his identity.

He also revealed he had been in and out of many rehabilitation institutions, a fact not many people know. This was during the time he used drugs heavily and deceived many people.

The turning point, it seems, was during his last meeting with his mother, Gracia, before she died in 2017. At the time, Geisler was about to go to a five-day rehabilitation program in Tagaytay and was saying goodbye to his mother.

What happened next, he said, was a moment one would think they would only see in the movies.

(It was just like in the movies. She wanted to say something to me and I said, “Yes ma, yes ma?” Until now I still do not know what she wanted to say. So I just gave it my own meaning.)

(Before I die, I guess… I don’t want to put words in her mouth, but I guess [she meant to say], “Please take care of yourself, because I’m not here anymore.”)  Cody Cepeda /ra