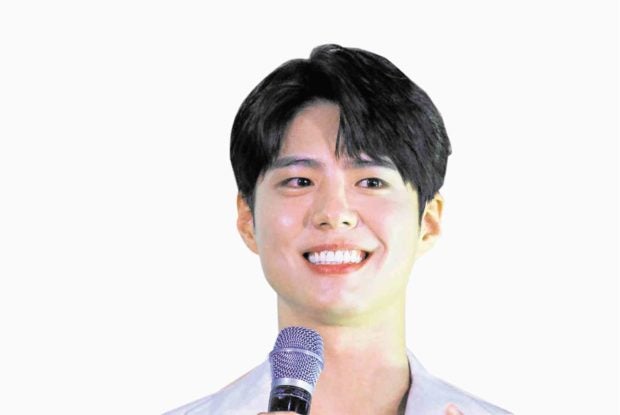 It was a surreal experience for his lucky Filipino fans to see Park Bo-gum in the flesh during the Korean star’s meet-and-greet for his “May Your Everyday Be A Good Day” 2019 Asian Tour, held at SM Mall of Asia Arena on Saturday.

Bo-gum kicked off his tour in Seoul and made stops in Japan, Thailand, Singapore, Hong Kong, Indonesia, Malaysia and Taiwan. The Manila leg is the tour’s final stop.

The excitement was palpable as the 26-year-old Hallyu superstar stepped out for his interview.

Bo-gum enthused, “I was looking forward to this and really wanted to be here.”

It was immediately clear that what sets Bo-gum apart from other personalities of his generation is the affable personality that has gained him a loyal following from a varied fanbase that has as many schoolgirls as grandmothers. 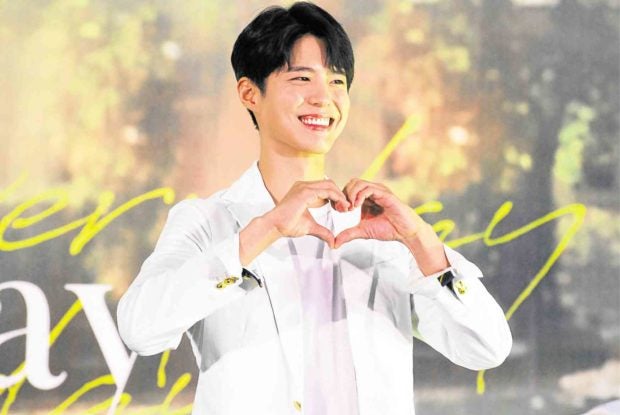 Park knows how to turn on the charm.

When asked about his visit to the Philippines, Bo-gum disclosed: “I have been to the Philippines twice. First was when I was acting in the drama ‘Wonderful Mama’ and the second time was for a vacation after ‘Love in the Moonlight.’ This was where I went snorkeling for the first time in Cebu, and that experience was very memorable for me.”

His boy-next-door appeal lent to the success of the hit K-drama “Love in the Moonlight,” a coming-of-age story about Crown Prince Lee Yeong (Park Bo-gum) and his relationship with Hong Ra-on (Kim Yoo-jung).

Asked what made the show a success with Filipino fans, Bo-gum said, “The audience can relate to it because they see a part of themselves in its characters. The humor in the story and the journey each of the characters take. [The story is framed by] beautiful Korean landscapes that give the scenes a dreamlike feel. I think that’s what made it appealing to Filipino fans.”

The Korean heartthrob was the youngest artist to be named Actor of the Year by Gallup Korea in 2016. The following year, he became the first actor to top Forbes magazine’s Korea Power Celebrity list.

After “Moonlight” and a year of touring the world for fan meets, Bo-gum went back to TV work by way of the K-drama “Encounter,” a love story between wealthy hotel exec Soohyun (played by Song Hye Kyo of “Descendants of the Sun” fame) and new employee Jinhyuk (Bo-gum). The series will soon air on ABS-CBN.

Excerpts from the Q&A:

You’ve tried many  roles over the years. What kind of characters would you like to try next? There are still many roles that I haven’t tried yet. I’d like to show my versatility by performing in various films.

You have a huge fanbase in Manila, what is it that sets you apart from the rest of the Hallyu stars? This is my first fan meet in the Philippines, and I’m just grateful for all the love and support I’ve been receiving here. I actually want to ask them what they like about me. 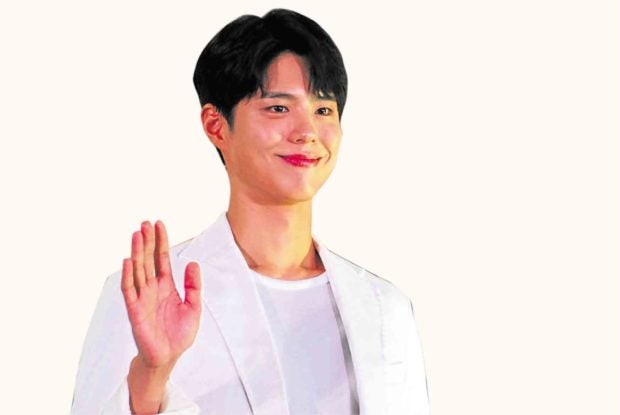 The Korean star waves to his Filipino fans.

You have an upcoming film with two of Korea’s top actors, Gong Yoo (“Coffee Prince,” “Train to Busan”) and Jo Woo-jin (“The Drug King,” “Inside Men”). How excited are you to be working with them? The title of the film is “Seo Bok,” in which I play a clone who has the secret to eternal life.  It tells the story of Ki Heon (Gong Yoo), a former intelligence agent who crosses paths with Seo Bok, mankind’s first human clone who is being pursued by several forces who want to get their hands on him. I’m just happy to be working with such amazing actors. Please look forward to it.

Share with us an unforgettable experience that has happened on this meet-and-greet tour. The fact that I’m on this tour in Asia is already unforgettable. I truly appreciate the fans for their time and love, regardless of the language we speak. They’ve chosen to spend their precious time on me, so I prepared [hard] for this tour, hoping I could give them a really good day in return.

What are three things on your bucket list before you turn 40? First, get married. Second, study abroad. Lastly, act in foreign films.

What is your message for your loyal Filipino supporters? Thank you so much for your support and warm welcome. Let’s have fun, and I hope we make a good memory together. God bless you all.

Read Next
Lilibeth bids Eddie goodbye: He was my protector, my Superman
EDITORS' PICK
2 Chinese nationals arrested in raid on another unlicensed COVID-19 hospital in Pampanga
SM prepares for ‘safe malling’
NBI, Immigration to join hunt for ‘underground’ medical clinics
Notice of 2020 regular meeting of stockholders June 18, 2020
Leveling up your ‘lutong bahay’ with the kitchen companion you never knew you needed
Duterte approves Metro Manila’s shift to GCQ starting June 1
MOST READ
Duterte approves Metro Manila’s shift to GCQ starting June 1
Revillame tells Roque: ABS-CBN is in my heart despite being in rival network
NCR is ready for GCQ — Palace
Año: Quarantine passes not needed in GCQ, movement restricted to essential travel
Don't miss out on the latest news and information.