Lilibeth bids Eddie goodbye: He was my protector, my Superman 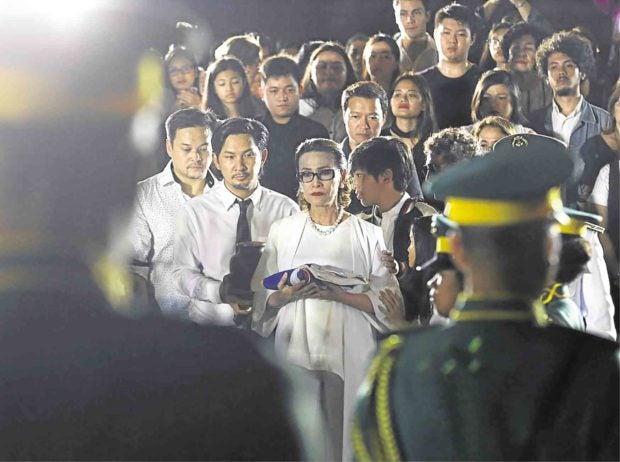 At first, Lilibeth Romero, the late Eddie Garcia’s partner of 33 years, had refused to bid the actor goodbye. For the longest time, she believed he was “immortal.” But now, she must.

“I said, ‘Go. You have been lifeless and I don’t want you to be looking this way. I want you to be pogi … Don’t you worry about us.’ And then, the neurologists came and declared him gone.”

Romero recalled the actor’s final moments in her eulogy on Sunday—the last night of the industry icon’s wake.

Romero never left Garcia’s side until he died. She talked to him all the time and made sure to play his favorite songs, like “Green Fields” and “The Green Leaves of Summer” by the Brothers Four.

Because she considered her and Garcia just like any other couple, Romero admitted that she didn’t have a full grasp of just how “loved, respected and popular” Garcia was until his accident.

“I didn’t realize this when I had him, because I just saw ourselves as a man and a woman, going about our normal ways,” she pointed out. “I didn’t idolize him like a hero, but I knew he was my protector … my Superman.”

In his 70 years in show biz, Garcia managed to amass over 40 awards in recognition of his acting, directing and many other indelible contributions to Philippine cinema. 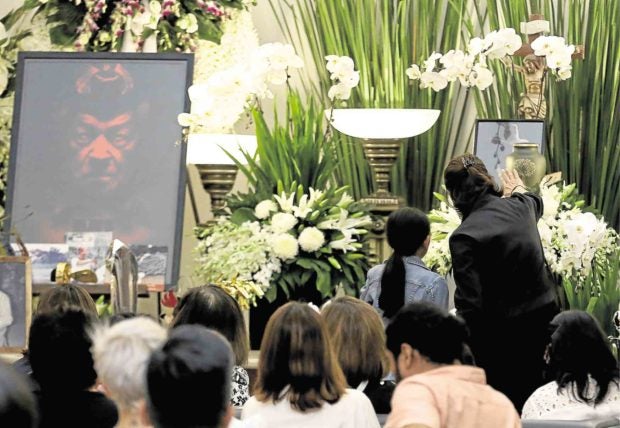 Scene at the wake of the veteran star on June 21. —RICHARD A. REYES

On Sunday, he received what his family considers his most meaningful award yet.

“He served the Philippines very well. This is Eddie’s last trophy and this is dedicated to all of you,” Romero said, choking back her tears as she held the keepsake Philippine flag used in the full military funeral rites accorded to Garcia by the Philippine Army at Heritage Park in Taguig City.

Garcia, who had always aspired to be a soldier, was a military police sergeant for the Philippine Scouts in Okinawa, Japan, during World War II. “I had received a lot of awards on his behalf,” Romero said. “But this is the best recognition.”

Her son Mikee Romero, representative of the 1-Pacman party list group, was the one who requested for burial honors. At first, the Army demanded a mountain of documents, he related. “But in the end, they said, ‘That’s Eddie Garcia … Let’s give him the highest honors.’”

“They did it, not just because he was a scout, but because he was one of the best and most respected actors in the country,” the congressman added. “I was told they don’t perform such ceremonies at night—they typically do it in the morning or before sun down. But they made an exception for Eddie Garcia.”

There was no time for a rehearsal—they had to carry out the rites in one take. As luck would have it, renowned cinematographer Romy Vitug, one of Garcia’s close friends, was there and volunteered to orchestrate the proceedings.

“He took care of the lights and their positioning. He wanted our Tito Eddie’s last stand to be orderly and well-directed,” he said, adding that the flag given to them by the Army was perhaps “the most symbolic” among all of Garcia’s trophies—some of which were on display beside the olive green urn containing the actor’s ashes.

After the ceremony, Garcia’s family and friends paid tribute to the man: His grandchildren reminisced about how they used to play with lolo’s Famas trophies and stage their mock awards night; his “Ang Probinsyano” coactor Jhong Hilario revealed that he was supposed to be part of the film “Bwakaw” and do a kissing scene with Garcia;

His daughter-in-law Aida, wife of his son Eddie Jr., who died in a motorcycle accident at 22, thanked the actor for attending her college graduation and standing as the father she had lost early in life; incoming Sorsogon Gov. Chiz Escudero vowed not to cry, because he knew that Garcia’s legacy would live on in people’s hearts; his son Erwin thanked his father for loving and forgiving him, even in times he thought he didn’t deserve it.