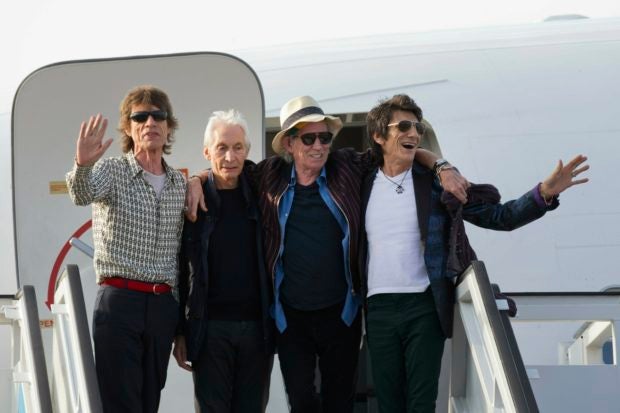 In this March 24, 2016 file photo, members of The Rolling Stones, from left, Mick Jagger, Charlie Watts, Keith Richards and Ron Wood pose for photos from the plane that brought them to Cuba at Jose Marti international airport in Havana, Cuba. The band plays Friday, June, 21, 2019 at Soldier Field in Chicago after a postponing their North American tour because frontman Mick Jagger needed medical treatment. A second show is scheduled for Tuesday at Soldier Field. Image: AP/Ramon Espinosa

Please allow them to reintroduce themselves: The Rolling Stones are set to return to the stage.

St. Paul & The Broken Bones are expected to open Friday, and Whiskey Myers on Tuesday.

The Rolling Stones said in a statement last month the concerts will feature classic hits such as “Sympathy For The Devil” and “Paint It Black”.

The No Filter Tour was delayed after doctors told the 75-year-old Jagger in late March he couldn’t tour at the time. CC

‘Feeling pretty good,’ Mick Jagger is back on track