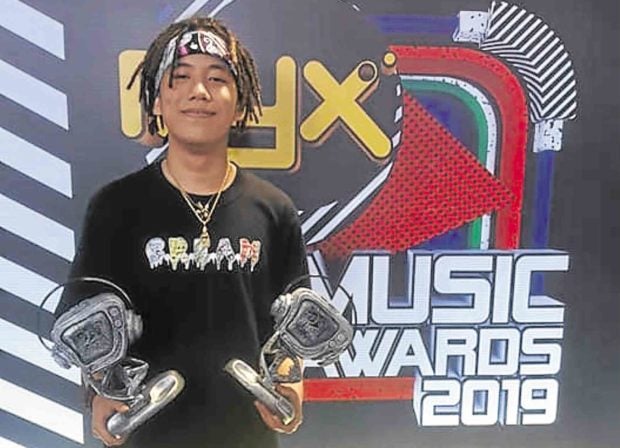 MANILA, Philippines — After stirring a controversy, the song “Amatz” by rapper Shanti Dope has been banned from being aired on Kapisanan ng mga Brodkaster ng Pilipinas-member TV and radio stations, thanks — or no thanks — to the Philippine Drug Enforcement Agency (PDEA).

In a statement on Monday, PDEA Director General Aaron Aquino thanked the National Telecommunications Commission (NTC) for ordering the KBP to ban the song from the airwaves.

Aquino said the PDEA pushed for the ban of “Amatz” for its “double meaning,” purportedly portraying as harmless the recreational use of illegal drugs such as marijuana and “shabu” (crystal meth).

“Amatz” is a Tagalog slang word for “tama” or kick, which could refer to being drunk or high on drugs.

The rapper earlier clarified that the song was actually written to warn against the use of illegal drugs and promote a “natural high” such as what he feels when making music.

KBP, the media broadcasters’ organization, has 121 members including TV and radio stations nationwide.

The NTC order prompted the KBP to issue a reminder to all KBP members to observe the restrictions in the Broadcast Code, particularly pertaining to songs that must not be played.

Apart from the NTC and KBP, the PDEA director asked the Movie and Television Review and Classification Board, Organisasyon ng Pilipinong Mang-aawit and ABS-CBN to enforce on “Amatz” a provision on the Broadcast Code of the Philippines of 2007, which prohibits the playing of songs “with lyrics or messages that are vulgar, indecent, promote substance abuse, gender discrimination, racism, satanism, violence or sexual perversion or demeans a member of any sector of society.”

Aquino said the rap song’s encouragement for the use of illegal drugs was also punishable under Article 154 of the Revised Penal Code or “unlawful use of means of publication and unlawful utterances.”

He was particularly referring to a provision in the article which assigns criminal liability to “any person who … by words, utterances or speeches shall encourage disobedience to the law or to the constituted authorities or praise, justify, or extol any act punished by law.”

“PDEA cannot turn a blind eye to songs whose lyrics advocate drug use because it is part of the agency’s mandate to implement drug control strategies and harm reduction,” Aquino stressed.

In a June 7 letter to the KBP, NTC Commissioner Gamaliel Cordoba asked the organization to abide by the restrictions set by the Broadcast Code of the Philippines in terms of songs that should be prohibited from being aired on TV and radio stations.

Cordoba said that while Shanti Dope’s freedom of expression was recognized, “like any other right, such is not absolute if it contravenes public interest, public order, public safety and the general welfare of the children and youth.”