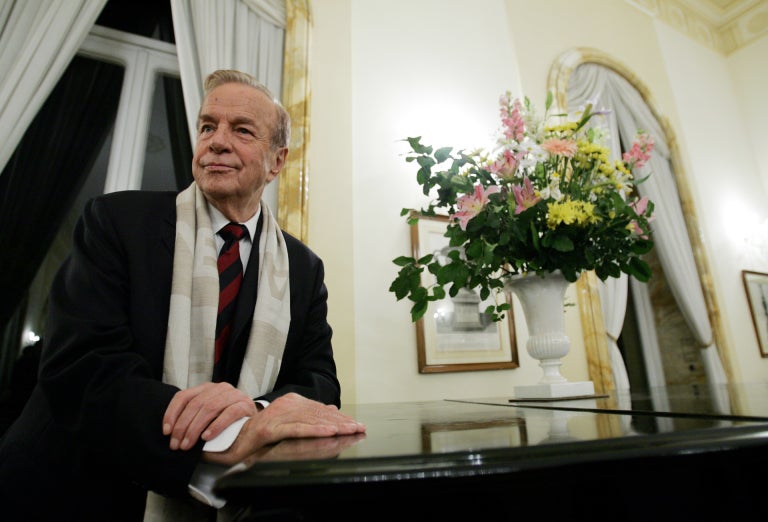 Italian film director Franco Zeffirelli poses at the British Embassy in Rome before receiving the medal of knighthood from the British ambassador to Italy, Nov. 24, 2004. Image: AFP/Paolo Cocco

Italy’s Franco Zeffirelli, who died Saturday, June 15, aged 96, was one of Europe’s foremost film directors, turning classics by Shakespeare and Verdi into modern gems, most famously in his Oscar-nominated “Romeo and Juliet” (1968).

With a career spanning more than 60 years and more than 40 films, plays and operas, Zeffirelli worked with a dazzling array of stars from Richard Burton and Elizabeth Taylor, to Glenn Close and Maria Callas of “La Diva” fame.

“Few Italians since Fellini have had such an impact in the United States as Franco Zeffirelli,” the New York Times said in 2009, reviewing his Met production of “La Boheme”.

As well as his work with Hollywood A-listers, the cultural icon has also collaborated with some of the 20th century’s greatest voices, including Callas and Placido Domingo, in the world’s most prestigious venues.

In the 1970s, he expanded his repertoire to biblical subjects, notably in the all-star mini-series “Jesus of Nazareth” with Laurence Olivier, co-written with English novelist Anthony Burgess.

The series starred no fewer than seven Oscar winners.

Another religious theme was Brother Sun and Sister Moon, on the life of Saint Francis of Assisi.

In later years of Zeffirelli’s life, he would provide inspiration in “Tea with Mussolini” (1999) starring Cher, Judi Dench and Maggie Smith as British and American women raising a young Italian boy in Florence through and after the Second World War. Dench also starred in a London theater production of his Romeo and Juliet.

Born in the Tuscan city on Feb. 12, 1923, Gian Franco Corsi Zeffirelli was the illegitimate son of a married fashion designer who died during his childhood. His father, a likewise married textiles trader, only recognized him in his adolescence.

His mother came up with the name of “Zeffiretti”, “little breezes,” named after an aria from Mozart’s opera, Idomeneo.

In the registration of births that was corrupted to Zeffirelli, both of his parents died when he was young and he was taken in by his aunt.

As a youngster, Zeffirelli was fascinated by casts of traveling actors performing in local villages, sparking his love of theater and also music.

He studied architecture and then fought with the partisans against the fascist dictator Benito Mussolini during World War II.

During the conflict, he also became an interpreter for the Scots Guards, a regiment of the British Army. It was that connection, as well as his contribution to the arts, that earned him in 2004 an honorary knighthood from Tony Blair’s government.

After the war, he met Italian film giant Luchino Visconti. The encounter proved decisive. Visconti, one of cinema’s greatest names, hired him as an assistant on three of his films.

Visconti was his mentor and became his lover. Their affair was, in Zeffirelli’s telling, tumultuous, volcanic and ended brutally, but the union propelled and influenced his artistic career.

An elegant, exuberant maestro in the world of art, Zeffirelli’s political trajectory has been more jagged and controversial.

From 1994 to 2001, he worked as a deputy in Italy’s upper house for the center-right Forza Italia party of tycoon Silvio Berlusconi, whom he defended amid escalating stories of his sexual antics.

“What is the scandal,” he said in an interview with the New York Times in 2009. “I think it is a joke. It is ridiculous … Berlusconi is a man that likes a lot of women.”

A homosexual and Catholic, Zeffirelli opposed an increasingly liberal sexual climate and came out against any recognition of gay couples.

In 2004, he advised audiences against seeing Mel Gibson’s “The Passion of the Christ”, which he described as “a step backward of several centuries” in its portrayal of Jews.

In another unusual twist, he agreed in 2007 to become an image consultant to Pope Benedict XVI, finding the conservative pontiff’s robes “too sumptuous and flashy.”

On an interview in March with the Italian newspaper Corriere Della Sera, he named two major projects he regretted not having been able to take on.

One was a film adaptation of Dante’s “Inferno”, and the other was a film on life and works of the quintessential Renaissance dynasty, the Medicis. HM/JB