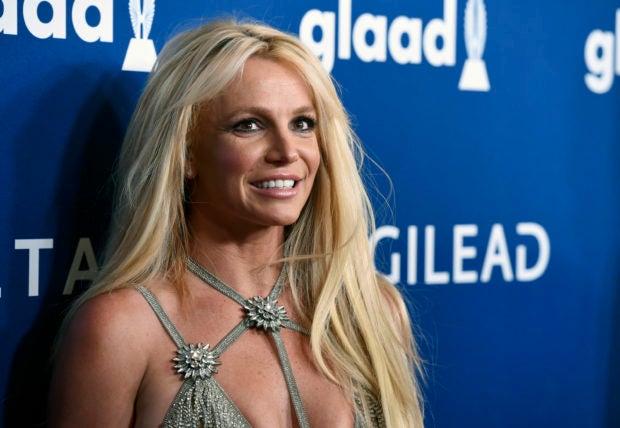 This April 12, 2018, file photo shows Britney Spears at the 29th annual GLAAD Media Awards in Beverly Hills, Calif. A Los Angeles judge is set to consider whether to extend a temporary restraining order taken out in the name of Spears against her former manager. The hearing Thursday, June 13, 2019, on the restraining order against Sam Lutfi is a resumption of one that began on May 28, with lawyers for Spears’ intending to show that tweets and texts from Lutfi to Spears and her family are doing her emotional damage. Image: Invision/Chris Pizzello via AP

A judge on Thursday issued a five-year restraining order forbidding Britney Spears’ former manager from contacting the singer or her family or making disparaging statements about them online.

Los Angeles Superior Court Judge Brenda Penny reached the decision after hearing testimony from the ex-manager, 44-year-old Sam Lutfi, and from Spears’ father, James Spears, who has controlled his daughter’s money and affairs via a court-ordered conservatorship for 11 years.

Penny rejected arguments from Lutfi’s attorney, Marc Gans, that the order is an unconstitutional restraint on his client’s free speech, calling Lufi’s testimony evasive and extending the temporary restraining order she first issued on May 8.

Gans said outside court that they are considering an appeal. James Spears declined comment.

James Spears conceded under questioning from Gans that he does not have the most peaceful relationship with Britney Spears.

“Me and my daughter’s relationship has always been strained,” James Spears said.

But in further testimony that Penny said she found forthright and credible, James Spears testified that Lutfi, who was close to Britney Spears in 2007 and 2008 and served briefly as her manager, has been a “predator” on his family for more than a decade whose harassment has recently resumed.

“I worried that he was trying to take down the conservatorship,” Spears said from the stand. “I was very angry. I was worried that we were right back in 2008.”

Spears and his lawyers suggested, and Penny appeared to agree, that Lutfi has attempted to incite fans who have used the social-media hashtag #FreeBritney to criticize the control James Spears and the court have had over the pop star for the past 11 years.

Lutfi’s Twitter account, the subject of much of the testimony, consists almost entirely of posts critical of Spears’ circumstances and those surrounding her.

But Gans argued that none of the statements were made directly to individuals or could be considered harassment.

He also emphasized that Lutfi has made no direct contact with Britney Spears herself, and suggested that her father and his lawyers were not speaking for her and had provided no evidence that she had in any way been harmed by Lutfi’s statements.

Britney Spears was not present in court, and she has made very few public comments on the conservatorship.

In testimony that Penny struck from the record, Lutfi said that Britney Spears had reached out to him at various times through the years to complain about her father’s control over her.

“She wanted help to get out of this situation,” Lutfi said.

The judge also shut down most of Gans’ questions toward James Spears. The questions asked him to discuss his daughter’s mental state and tried to establish that disparaging online statements Lutfi had made about James Spears’ use of alcohol and his enriching himself through the conservatorship were true and constitutionally protected.

Lutfi admitted that he had contacted Britney Spears’ mother, Lynne Spears, and the singer’s brother-in-law James Watson via texts and phone calls, and sent Lynne Spears money that was subsequently returned.

Lutfi testified that he sent the money “just like numerous other fans did” because Lynne Spears had “liked” Instagram posts that suggested she was in need of money and that she should be in charge of her daughter’s affairs instead of her ex-husband James Spears.

“I had a great relationship with Lynne Spears,” Lutfi said of his time with Britney Spears.

Lutfi and Gans said that neither Lynne Spears nor Watson had told him to stop communicating with them or told him he was harassing them.

Gans also argued that tweets from his client, including one that simply said “Raise hell,” were far too vague to be considered harassment of the Spears family.

Penny disagreed, citing that tweet in her decision as illegal incitement.

The proceedings were a resumption of a hearing that began on May 28 and had been closed to the media and the rest of the public. But Penny, who also oversees Spears’ conservatorship case, kept the courtroom open on Thursday.

The Spears family has frequently fought Lutfi in court, starting with a restraining order they received against him in 2009.

“He’s been asked repeatedly to stay away from this family,” Chad Hummel, an attorney for the conservatorship, said in closing arguments. “He can’t help himself.” CC

Britney Spears returns to Vegas with new residency in 2019