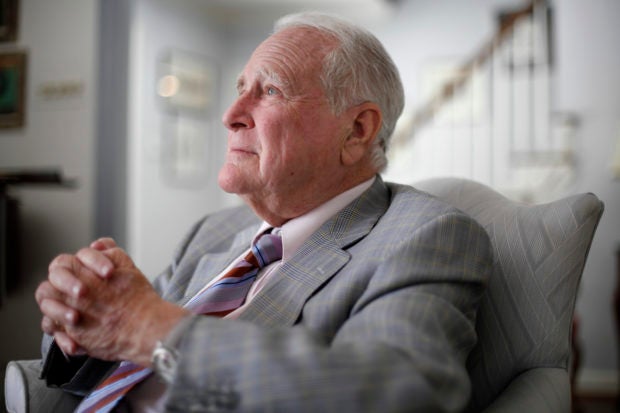 In this April 19, 2012 file photo, broadcast pioneer Lew Klein, who helped to create “American Bandstand”, speaks during an interview in Jenkintown, Pa. Klein taught and mentored at Temple University in Philadelphia for more than six decades, lending his name to its communication school. The school said he died Wednesday, June 12, 2019. He was 91. Image: AP/Matt Rourke

Lew Klein, a broadcast pioneer who helped create “American Bandstand” and launched the careers of Dick Clark and Bob Saget, has died. He was 91.

Klein died Wednesday, according to Temple University, where Klein taught and mentored students for more than six decades.

He began working at WFIL-TV, now WPVI-TV, where he directed “Romper Room” and co-created “Captain Noah and His Magical Ark”, two popular children’s programs in the 1960s that attracted a bigger local audience than “Sesame Street”.

A native of Philadelphia, Klein served as executive producer of “American Bandstand”, the popular music performance and dance television show hosted by the late Clark. Klein is credited with launching Clark’s career and served on the board of Dick Clark Productions.

Klein spent 15 years producing telecasts for the Philadelphia Phillies and also helped with the careers of players-turned-sportscasters including Richie Ashburn and Tim McCarver.

Only a couple years after he graduated with an English degree from the University of Pennsylvania, Klein started teaching at Temple. He stayed for more than 65 years.

In 2017, Temple renamed the College of Media and Communications in his honor. During a ceremony, which included remarks from comedian Saget, Klein said he was “so proud and very thankful” to be honored by the university.

“Lew could see the gleam in a student’s eye who was inspired to do the work,” Saget told The Associated Press in a phone interview Thursday.

Klein helped Saget get an internship on “The Mike Douglas Show”, a daytime talk show. Klein was also an early supporter of “Through Adam’s Eyes”, a film Saget made in the late 1970s at Temple about his nephew who received facial reconstructive surgery.

“I can truly say he was a conduit for all of that,” Saget said.

“People like him don’t come around often,” Saget said. “He was just an all-around good man. When I saw him, I kissed him. And I only did that with my dad, Don Rickles and Norman Lear.”

“I lost someone who I admired dearly,” she tweeted alongside a photo of the two of them.

Joe Conti, president of the Pennsylvania Association of Broadcasters, called Klein a “titan within the broadcast community.”

“He was a compassionate leader, tireless advocate and mentor to generations of broadcast television and radio professionals,” he said in an emailed statement.