For a change, two Asian leads in a Hollywood rom-com: Park (left) and Wong —NETFLIX

LOS ANGELES—It’s not every day that I interview two Asian leads in a Hollywood rom-com. Even more wonderful is that their Netflix movie, “Always Be My Maybe,” is funny and engaging, and Randall Park and Ali Wong are appealing and shine together.

Randall and Ali, friends for 16 years, beam beside me, casual and comfortable with each other. In director Nahnatchka Khan’s “Always Be My Maybe,” they play Marcus and Sasha, two childhood friends whose brief teenage romance ended badly.

Many years later, they meet again. She has become a popular chef, while Marcus is working for his dad’s air conditioning service business. 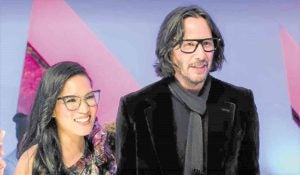 Wong (left) and Keanu Reeves, whose suave entrance video in slow motion in his cameo appearance in “Always Be My Maybe,” has gone viral. —NETFLIX

The mostly Asian cast is good, as well. Keanu Reeves—in case you forgot, he is part Chinese—makes a memorable cameo and gamely parodies his celebrity status as Sasha’s famous boyfriend. The video of Keanu’s slow-motion entrance scene in the film has gone viral.

Randall, of course, is the star opposite “Crazy Rich Asians’” Constance Wu in “Fresh Off the Boat,” hailed as the first US network prime-time sitcom starring an Asian-American family since Margaret Cho’s “All-American Girl.”

Aside from the movie’s Asian pedigree, “Always…” has Filipino pedigree. Randall and Ali wrote the movie with Michael Golamco, a Fil-Am whom they met at UCLA. Michael is writing, with Taika Waititi, the long-awaited feature version of the cult manga “Akira,” with Leonardo DiCaprio as producer.

And Ali is married to Justin Hakuta whom she describes as “half Filipino and half Japanese. I’m half Chinese and half Vietnamese, so we always joke that we gave birth to Asia.” 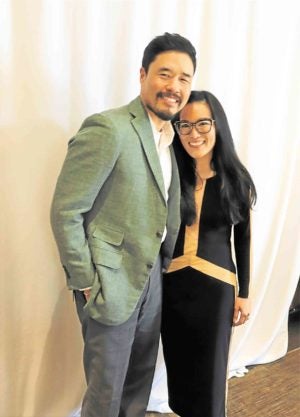 Justin’s parents are Marilou Cantiller, a Filipina who worked at World Bank, and Ken Hakuta, an inventor and host of the children’s TV program, “The Dr. Fad Show.”

“It’s interesting—people always assume that he’s a doctor,” Ali says about Justin, who attended Harvard and who is the subject of her routines. They have two kids. “But he went to business school, which is actually not sometimes associated with being a typical Asian thing. He’s quite atypical in a lot of ways, but he’s a really interesting guy. I’m very proud of him. He’s great.”

“He’s equally both,” she says about Justin’s Pinoy and Japanese heritage. “He will eat the sh*t out of a pig’s foot, crispy pata. But, at the same time, he grew up going to Japan every summer.”

Ali points out, “We haven’t been to the Philippines. We really want to go. But, yeah, our kids are great. They call their grandmother, lola. They like sinigang, and they love adobo…

Randall comments about their movie’s Asian connection: “Ultimately, we want, or I know I want, people to identify with these characters as human beings. And all of the cultural elements of the movie aren’t things that deter them from identifying with these people on a human level. For me, that’s the most important thing.”

Have you landed roles that originally were not Asian?

Randall (R): A bunch of times throughout my career, yeah. Any opportunities that I could get, so long as they weren’t super offensive or stereotypical, were great. I ran the gamut in terms of the type of roles that I would play.

Some of them were written specifically for Asian-Americans, or Asians.

It seems like both of you had a lot of fun on set.

Ali (A): Yeah, it was a lot of fun. We’ve been friends for a long time. I’ve known Nahnatchka, the director, for a while, too.

You know that scene where we’re in the car and we had just lost our virginity to each other and it’s a little awkward? We improvised a lot of those lines. It went on for so long and it was so funny, and it was so late. There were mosquitoes biting our groins.

Your first kiss scene in the car—was that also your characters’ first French kiss?

Do you still remember your first kiss?

A: I do. I was in eighth grade and I had a boyfriend. I was tying my Converse shoes in my parents’ house entrance. There was a lot of plants around, and he kissed me. It surprised me and it was exciting.

R: It was not that exciting of a story. I was a senior in high school. I was a late bloomer and I had my first girlfriend. It was by a tree at this park that we always hung out at. It was scary and nerve-wracking, but it was nice.

What were some aspects of the movie that were a nod to your heritage?

A: Using scissors to cut green onions, or vegetables, is very specifically a Korean thing. Although my mom’s Vietnamese, and she likes to do that, too.

A: Also, just in general, that scene … [showing] Jenny (played by Vivian Bang), his (Marcus) girlfriend with the dreadlocks. That’s something that is so specific to Asian-American culture that you don’t see a lot—this bohemian Asian-American girl that I’ve been wanting to put on camera for a long time, that maybe a lot of people might not know about.

There are certain things that are specific to our shared experience, of going to UCLA and being involved in Asian-American studies, that people will be able to relate to.

You play this amazing chef. How good a cook are you in real life? I’m pretty good. But now that I’m a mom, it’s a lot of Dino Nuggets, to be quite honest.
This great chef named Niki Nakayama designed all the food in that maximal scene with Keanu, with all that douche-y food. Food is just a great vehicle of expression.

In the movie, your characters grew up together and liked each other, but you were separated by events. One became very successful; the other is struggling. Can you relate to those dynamics?

R: I identify with the character I played with in a lot of ways, because well in my 30s, I was living at home with my parents. I moved back, and I wasn’t a musician, but I was trying to be an actor.

And a lot of my friends in my 30s were getting married and getting promotions at their jobs. When I started acting, it was a definite time of struggle and a lot of self-doubt. But, like Marcus, I was content with my decision to pursue this thing that I loved.

A: There were definitely times when I struggled, starting out doing stand-up. I started when I was 23, and back then, it definitely wasn’t as friendly to women, for sure. There were a lot of people who said unkind things to me.

Then I moved to New York, away from my family. I experienced winter for the first time. I was so poor, and I was so lonely, and I didn’t know anybody. But I just kept going.