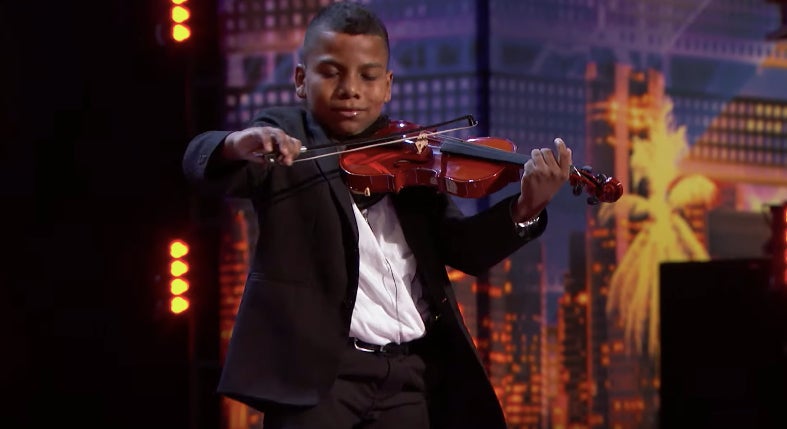 An 11-year-old cancer survivor from North Carolina earned the Golden Buzzer in a recent episode of the talent show “America’s Got Talent” which aired yesterday, June 11.

Tyler Butler-Figueroa received the coveted Golden Buzzer from judge Simon Cowell with his rendition of Kelly Clarkson’s hit song “Stronger” on his violin.

Figueroa was diagnosed with leukemia when he was four and a half years old.

“One day, we were out to dinner. I said, ‘Something does not look right with Tyler, he turned kinda pale,’ so a mother’s instinct said, ‘Let me get him to the emergency room, that was like let us take some blood work and we will be back,’” Figueroa’s mother said.

When Figueroa lost his hair during chemotherapy, he shared that he had been bullied in school.

“When I lost my hair, I was really sad and embarrassed at the same time to go to school,” Figueroa said. “They used to make fun of me and laugh at me because I was different, they would spread rumors to say that my cancer was contagious and they all wanted to stay away from me.”

As a result, Figueroa wanted to learn how to play the violin after seeing a flyer that offers free violin lessons.

“Once he started that [violin] class, it was like sunshine,” Figueroa’s mother stated. “He was just full of energy and happy, and I was like, ‘Oh my God, I got my son back.’”

“When I play the violin, it helps me forget about all the bad stuff. I just did not want to be the kid with cancer, so now I am the kid who plays the violin,” Figueroa said.

The cancer survivor received a standing ovation from judges Julianne Hough, Gabrielle Union and Howie Mandel, as well as from the audience, after his performance.

Figueroa, when asked by Cowell on the current state of his health, said he had been in remission for almost four years.

“You are an extraordinary young man, we hear too many stories about people being bullied but I can tell you one thing, most people are bullied because they are better than the people who bully them,” Cowell said.

“I think you have such an amazing talent, such a personality, and I would like to say something on your behalf to the bullies,” Cowell added, as he pressed the Golden Buzzer, with Figueroa erupting in emotion.

The Golden Buzzer was introduced in the ninth season of the show. Each judge can only press it once. Once availed of, the contestant for whom it was pressed will automatically be sent to the next round, regardless of the votes of other judges.

“America’s Got Talent” is currently on its 14th season. JB

Angelica mum on Carlo’s defense of rumored GF: He doesn’t exist in my life now, we don’t talk