Rapper Bushwick Bill of the Geto Boys dies at 52 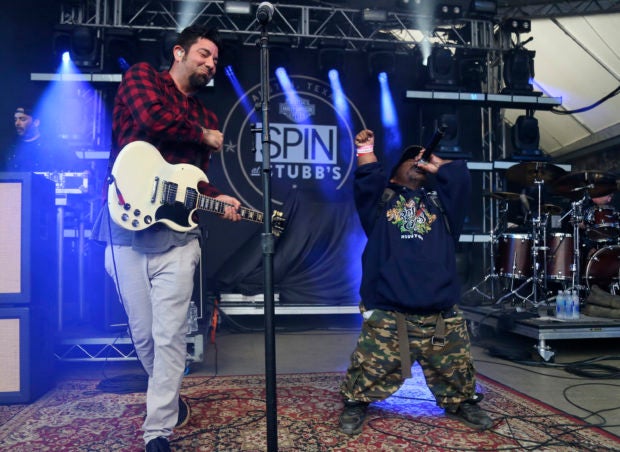 In this March 18, 2016, photo Bushwick Bill, right, joins Deftones’ Chino Moreno onstage at the SPIN Party at Stubb’s during the South by Southwest Music Festival in Austin, Texas. A publicist for rapper Bushwick Bill says the founder of the iconic Houston rap group the Geto Boys has died. Bill’s publicist, Dawn P., told The Associated Press that the rapper died Sunday, June 9, 2019, at a Colorado hospital. Image: Invision/Jack Plunkett via AP

Bushwick Bill, the diminutive, one-eyed rapper who with the Geto Boys helped put the South’s stamp on rap with hits like “Mind Playing Tricks On Me” and “Six Feet Deep”, died on Sunday at the age of 52, according to his publicist.

Dawn P. told The Associated Press that the rapper died Sunday at 9:35 p.m., local time, at a Colorado hospital. The publicist says the rapper, whose legal name is Richard Shaw, was surrounded by family when he died.

His Dallas-based business manager, Pete Marrero, said the rapper was diagnosed with stage 4 pancreatic cancer in February. He had been planning to go on tour around the time he was hospitalized.

In an interview with TMZ, Bushwick Bill said he wasn’t afraid of dying, referencing one of his songs, “Ever So Clear” from his 1992 solo album, where he talks about shooting himself in the head and losing an eye when he was high on drugs.

He said he was working on new music because, “I notice when most celebrities pass, they really don’t have nothing set up for their children and everything’s in disarray so I figure, old music will sell but if I have new music for them… at least they will have residual income from those things.”

The Houston-based Geto Boys was a trio consisting of Bushwick Bill, Scarface and Willie D that launched in the late 1980s. Their gritty verses punctuated by tales of violence, misogyny and hustling made them platinum sensations and showed that rap had strength outside the strongholds of New York, where it got its start, and later Los Angeles.

Bushwick Bill was the group’s most explosive member, and played up his real-life chaos: The cover of the Geto Boys “We Can’t Be Stopped” features him on a gurney with a garish eye wound. Later, he would compare himself to the horror character Chucky, even writing a song about it.

On another of the group’s tracks, “Damn It Feels Good to be a Gangsta”, he rapped about being a smart gangster who was positioning himself for success and longevity rather than a violent early death. The song was featured in Mike Judge’s 1999 workplace satire “Office Space”.

The Jamaica-born rapper was widely reported to have died earlier Sunday after a bandmate wrote a post on Instagram suggesting so, but his publicist had said Sunday afternoon that those reports were premature. CC

Read Next
Pia Wurtzbach backs Vickie Rushton: ‘I hope she can try again’
EDITORS' PICK
Quick chat with Nicole Andersson: ‘You really don’t need much to be happy’
10 Filipinos positive for COVID-19 in UK, 7 in Ireland — envoy
Robredo spox thanks Duterte for defending VP’s efforts vs COVID-19
IATF to LGUs: Issue ordinances vs attacks on frontliners, COVID-19 patients
Nograles: Cabinet members to donate 75% of monthly salary to aid COVID-19 fight
Diokno to Duterte: OK to make fun of buck tooth, but focus on people’s needs first
MOST READ
Coronavirus hotbed Rizal to shut borders on April 6
Gov’t mulling quarantine period extension of 15-20 more days
Sotto on Isko Moreno’s call: We do our job without the media following our every move
Robredo spox thanks Duterte for defending VP’s efforts vs COVID-19
Don't miss out on the latest news and information.