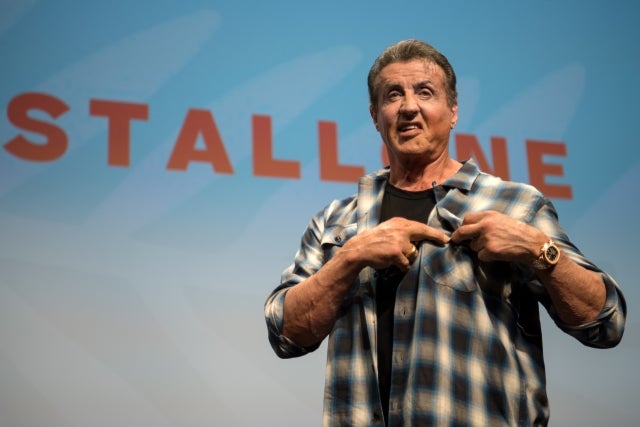 Sylvester Stallone said that he and Arnold Schwarzenegger should set up a Hollywood elocution school together. Image: LOIC VENANCE / AFP

Sylvester Stallone said Friday that he and Arnold Schwarzenegger should set up a Hollywood elocution school together as he gave the Cannes film festival a sneak preview of “Rambo V: Last Blood”.

The “Rocky” star opened up about the facial paralysis that dogged him since birth and left him not being able to speak properly for years.

He told a masterclass at the world’s biggest film festival that he thought he would never make it because of his “physical flaws”.

“It was hard for me to speak. I had an accident when I was born so this side of my mouth was paralyzed. So even as a boy when I talked I had this very deep ‘How ya doing?’ voice,” Stallone said.

“So (later) when I was trying to get jobs in commercials, the director would say, ‘What are you saying? What language is this?’

“I knew it was bad when Arnold Schwarzenegger said to me, ‘You have an accent.’

“Arnold and I should open up a school for speech lessons, it would be perfect. If we can make it, anyone can.”

A nerve was severed in Stallone’s face when doctors used forceps during his difficult birth.

The 72-year-old action hero actor showed a rarely-seen philosophical side at his Cannes talk before a screening of a restored version of his original “Rambo” film, “First Blood”.

His life’s work has been about resilience, Stallone told cineastes gathered in the French Riviera resort, and he has found himself returning to the theme again and again.

“There is something about the nature of men and women, we are resilient, we have been through so many upheavals over thousands of years,” he said.

“Civilizations have been destroyed but they come back. I am very into the theme of fight backing, not accepting defeat easily. And if you do get defeated, rebuild yourself and come back.”

Fate was also fickle, he warned. “Life can be beautiful and you get one phone call and your life is changed.”

The actor was given a prolonged standing ovation at his masterclass, with critics and cinema lovers clapping and cheering him as he filmed their reaction with his iPhone.

Stallone said that despite his heroes’ never-say-die attitude, he has never been above “pain, fear and failure. If you are… you are not human. Being human is balancing your weaknesses and making them a strength.”

The actor said the two roles that have defined his career are emblematic of two sides of human nature, one dark and the other hopeful.

“Rambo deals with a very dark side of nature that unfortunately a lot of people live with, and they feel isolated.

“Rocky is the more optimistic type. He realizes he is not a special man but tries to be special.”

The star will be honored at a black-tie dinner in Cannes later on Friday, which will begin the build-up to the release of “Rambo V” in September.

What is being billed as the final installment of the saga has the traumatized Vietnam veteran John Rambo going up against a Mexican drugs cartel. NVG

Sylvester Stallone to produce ‘The Gangster, The Cop, The Devil’