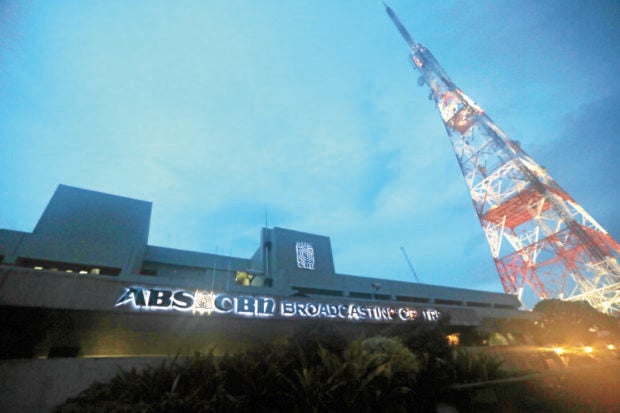 MANILA, Philippines — Celebrities aired their support for ABS-CBN after singer Jimmy Bondoc said he was excited to see the closure of the “biggest television network.”

While Bondoc did not name the network, personalities thanked and defended ABS-CBN for the opportunities it has given to them and other artists.

Actress Sunshine Cruz expressed thanks to the network for helping her rebuild her career in 2013. 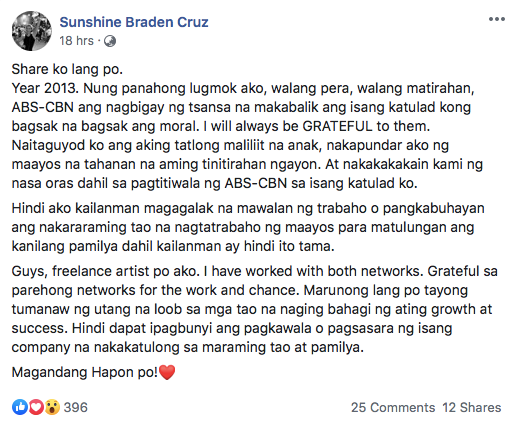 Cruz also pointed out she will never be happy about thousands of people losing their jobs should the network shut down as Bondoc wished.

But Bondoc earlier clarified he is not happy to see people losing their jobs and explained that closing down can mean “change of ownership,” hence employees will be retained.

Kapamilya singer Angeline Quinto was saddened by Bondoc’s post whom she considered as a colleague and friend. 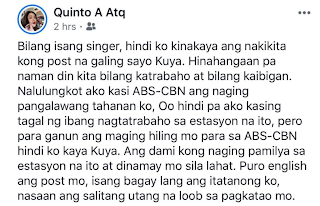 Singer Ronnie Liang, on the other hand, outright disagreed with Bondoc and said they should instead be thankful to the network. 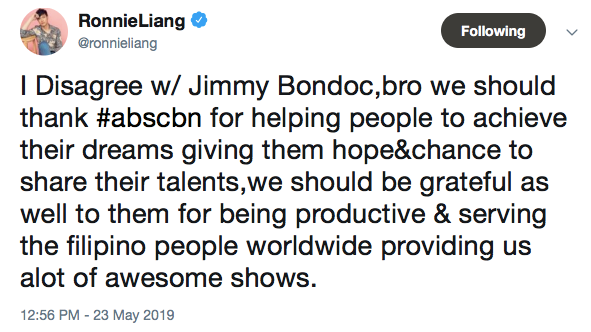 “I Disagree w/ Jimmy Bondoc, bro we should thank #abscbn for helping people to achieve their dreams giving them hope&chance to share their talents,we should be grateful as well to them for being productive & serving the filipino people worldwide providing us a lot of awesome shows,” Liang said in a tweet.

Meanwhile, Bondoc said he was surprised his post reached celebrities and shared an employee of the network even dared him to a fist fight.

Actress Angel Locsin also earlier called out Bondoc regarding his post and said he should not “wish ill of others.”

READ: Angel Locsin to Jimmy Bondoc: Let’s not wish ill of others

President Rodrigo Duterte previously threatened to block ABS-CBN’s franchise renewal that will expire in 2020. This was after the network allegedly did not air his campaign advertisement that was already paid during the 2016 presidential election. (Editor: Jonathan P. Vicente)